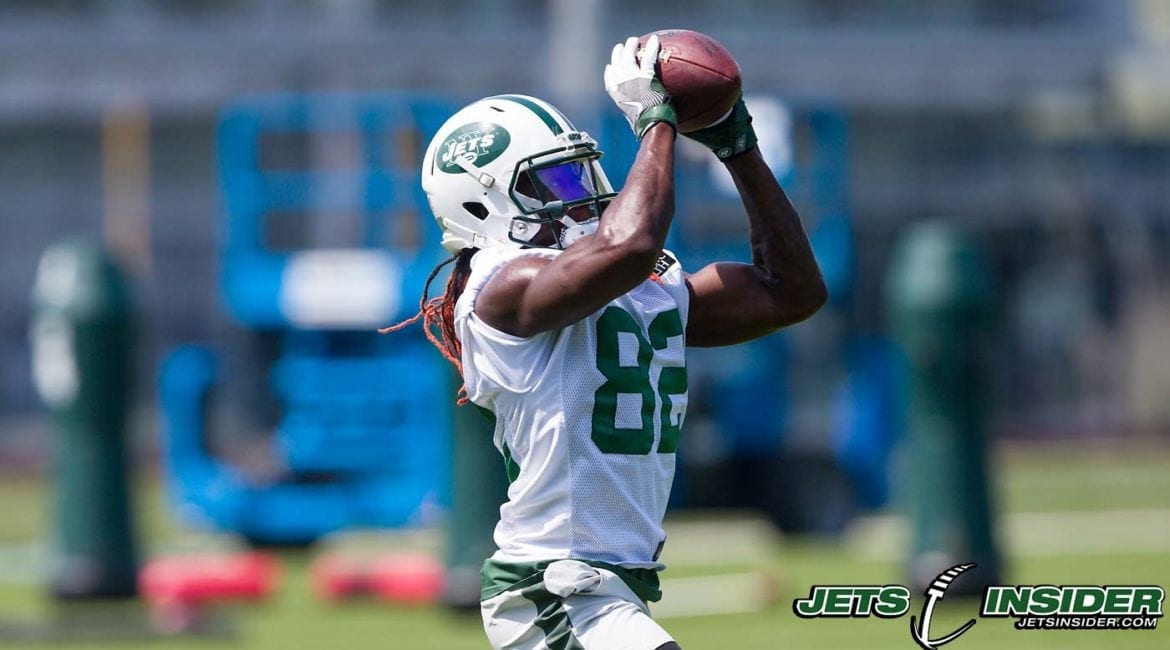 It is only day two of training camp, and the players have yet to put on pads for the first time. With that in mind, here are the three things I took away from today’s practice.

Nathan Shepherd is the real deal

The Canadian defensive lineman has been getting reps with both the first and second-team, and appears to be in the Jets plans as a part of their defense. Much of the worry behind players that made the jump to the NFL from places that aren’t division I football is that the speed of the game can be too much. It is yet to be seen how he will react in game situations, but multiple times this practice Shepard found himself in the backfield disrupting the flow and getting potential sacks (they’re not allowed to hit the quarterbacks). In one-on-one drills between the offensive and defensive lines, the first drill was between Shepherd and Kelvin Beachum, and Shepherd blew right by him and rang the bell, symbolizing a sack. All the lineman he faced struggled to contain him. With a lack of solid d-line depth, Shepherd could get plenty of playing time in 2018, and even turn a few heads.

The offensive line is going to struggle

With the signing of Spencer Long in the offseason and the return of Brian Winters expectations are that the line will improve. As noted in my position preview for the offensive line, that does not mean much. James Carpenter is clearly not the same player he once was, and could well end up being the worst guard in football. Dakota Dozier does not appear ready to take the starting role from Carpenter, but may be forced into action later on anyways. Although it is only day two, Kelvin Beachum has been struggling so far, and may be slowing down now that he is nearing 30. Brandon Shell does not look like he has improved too much, or at least enough to make a difference. If the line struggles, it will lead the Jets to having an offense centered around the quick pass, but that may have been the optimal choice considering the strength of the receiving core. This offense may be talented enough to overcome its line struggles.

It was a strong performance today by the tight ends overall, but as a group the names do not jump off the page. The starting job is Eric Tomlinson’s to lose, and with Clive Walford, Jordan Leggett, Bucky Hodges, and Neal Sterling also vying for the spot, it is up for grabs. Eric Tomlinson is mostly a blocking tight end. While Sterling and Leggett impress with their catching abilities, they fail to do so as a blocker. Walford and Hodges appear to be veteran camp bodies with barely an outside shot at making the roster, and will not end up as the starter. Herndon has the size and willingness to be a productive blocker, and made a very flashy catch in the end zone from a scrambling Teddy Bridgewater. Bridgewater threw a ball low and outside that Herndon snatched into his body with ease. His cuts upfield looked sharp, and his knee does not seem to still be bothering him.

No Sam Darnold, again, despite multiple chants from the fans, who were shocked he did not immediately emerge. Chad Hansen got some looks with the first-team, and looked crisp and confident. The quarterbacks had an off-day, and Josh McCown lost his cool at Chris Herndon for not running his route until the whistle. Terrelle Pryor looks like he is healthy and ready to return to form.