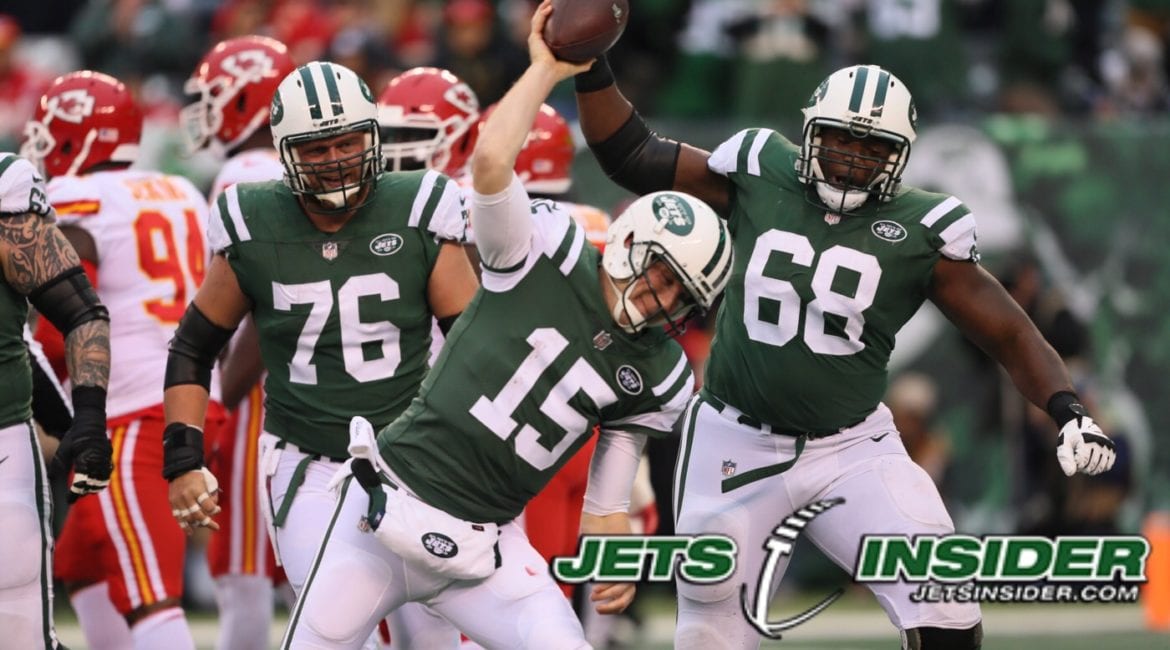 East Rutherford, NJ – For two teams that previously lost five of six games, Sunday’s contest was a wild one at The Met.

The New York Jets are doing everything in their power to make games interesting. Sunday was no different as they battled back from an early 14-0 deficit to beat the former AFC powerhouse Kansas City Chiefs, 38-31. Robby Anderson’s eight catches for 107 yards and Jermaine Kearse’s nine for 157 led the charge and kept New York’s slim postseason dream alive.

“It’s a big to win one,” head coach Todd Bowles said when asked about the importance of closing out a fourth quarter lead. “It gives you confidence and makes you breathe a sign of relief before next week. It’s a credit to the guys who are working hard and paying attention to detail. I thought they executed well.”

There was no fourth quarter debacle for the Jets on this Sunday. The Chiefs wouldn’t let that happen, judging from that four consecutive penalty showing by the Kansas City defense on the final Jets scoring possession of the game. Sure, the Jets capitalized on the Chiefs’ mistakes but Darrelle Revis’ new team couldn’t get out of their own way.

“There were a lot of penalties thrown,” Revis said. “We put ourselves in the hole with some of those penalties. At the end of the day, they schemed us very well and they played great situational ball.”

The Revis reunion went sour for the man making his return. Numerous times, Josh McCown and the offense picked on the cornerback’s side and Matt Forte made Revis look silly on several moves in the redzone. Then again, before Sunday, he hadn’t played a football game in 12 months.

Things got off to a stunning start at the Meadowlands. An offense that seemed inept the last six weeks jumped out to an early 14-0 lead thanks to Alex Smith’s 5-for-5 with 111 yards performance and Travis Kelce’s two touchdown receptions. Without Darron Lee, who was inactive due to a violation of team rules, the secondary struggled to cover the tight end that finished the afternoon with four catches for 94 yards.

However, like the team has done all season, the Jets made things interesting by scoring 14 unanswered points due to a Bilal Powell rushing touchdown, after Elijah McGuire’s original score was reversed, and a McCown sneak into the endzone. The 38-year-old capped off another strong performance under center, completing 26-of-36 for 331 yards, one touchdown and two rushing scores.

“We’re still growing up,” Bowles said. “But for them to not flinch after being down 14-0 early and fight to the end is a credit to them.”

The young, upstart Jets trailed 14-0, 17-14 and 31-30 but refused to quit. The resiliency is a reflection of the head coach who is getting his players to play week in, week out despite outsiders’ doubts.

“I think it’s a huge reflection on Todd. I love Todd,” said defensive lineman Leonard Williams. “I’m glad that he’s been able to impose his mindset onto the team. His mindset is just finish and play all four quarters.”

After the Jets trailed 17-14, McCown connected with Anderson four times to get downfield, setting up a Matt Forte receiving touchdown that crossed the endzone by a hair. Chandler Catanzaro nailed field goals from 27, 47 and 38 yards out to extend New York’s lead.

Smith and the Chiefs fought back and scored quickly thanks to Tyreek Hill’s masterful six-catch, 185-yard and two touchdown afternoon. Though they trailed in time of possession, Smith led the Chiefs down the Jets defensive throats on drives that lasted six seconds, 16 seconds and 2:10 to shock an amped MetLife Stadium crowd with green and red hue.

The game came down to one drive.

Down 31-30 in the fourth quarter, The Jets held the football for 6:58 on a 14-play, 75-yard drive with two penalties. One of those flags came on an unsportsmanlike conduct flag on Marcus Peters, after he launched the yellow material into the crowd, much to the thrill of a few fans.

Starting from the Jets’ 25, McCown established connections with Anderson, rookie Chad Hansen and Kearse as well as rely on Forte, Powell and McGuire to the tune of 157 yards rushing to set up the leading score. McCown powered himself up the middle for his second sneaking touchdown of the afternoon, setting off the fireworks, cheers and an impressive endzone spike.

“We’re going to try and win all of our games. Then, we’ll look up at the end of the year and see where we’re at,” Bowles said.

And why not? If the Jets offense plays like they did on Sunday, it’ll be tough to stop them moving forward.

WHAT DID WE LEARN?