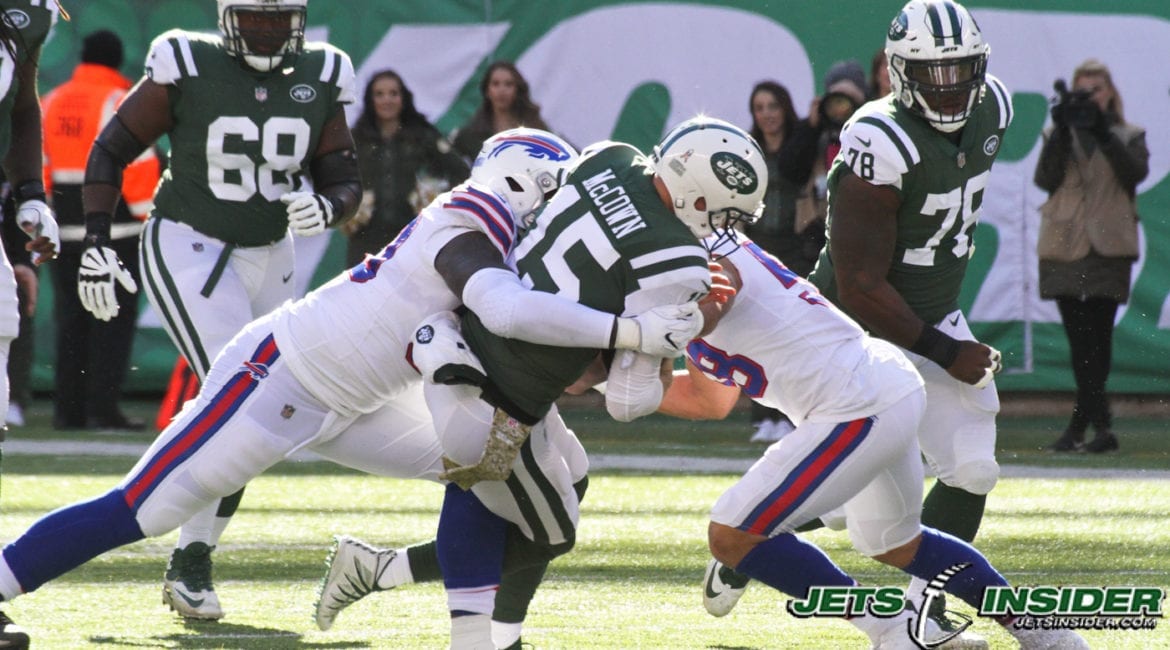 East Rutherford, NJ– The Buffalo Bills annihilated the New York Jets today, 41-10. The Barkley-led Bills dropped a forty burger on the Jets, and hardened Jets fans were forced to search for a time when they felt more embarrassed to bleed green and white, as the boo birds were out in force before halftime.

Coming into the game, the Bills were the 31st ranked team on ESPN’s power rankings. They’ve lost by 30+ points to Baltimore, Indianapolis, and Chicago, and if the season were to end today, none of those three teams would be in the playoffs.

Their quarterback room has been a carousel of mediocrity and inexperience, featuring highly touted rookie Josh Allen, a quarterback so bad his game footage may be used as evidence in the Kaepernick collusion case, and now, in week 10, Matt Barkley, who was beat out for the third quarterbacking job in Cincinnati by Connor Cook during the preseason.

Barkley might be the quarterback the Bills were waiting for- he threw 15-25 for 232 yards and two touchdowns, and had a QBR of 117.4. Not bad for man signed two weeks ago.

The Jets secondary had been banged up the last couple of weeks, but the once vaunted New Jack City is now back to being healthy. They came out and promptly fell flat on their face.

The first play from scrimmage was a 47 yard completion to Robert Foster where Trumaine Johnson got plain burnt. If it had been a better throw by Barkley, it probably would have been a house call.

Robert Foster, for those fans who don’t follow the NFL combine on a yearly, intensive basis, had 35 catches for 389 yards in three years at Alabama, and then shockingly went undrafted. The Bills promoted him to the active roster yesterday.

Not exactly the guy that should be burning your $70 million dollar cornerback if your Mike Maccagnan, even if it was Johnson’s first game back in five weeks with a quad injury.

Buster Skrine also played poorly, and while covering Zay Jones in the end zone, left inexplicably, resulting in an 8-yard touchdown strike from Barkley. Morris Claiborne was the only bright spot on the secondary, and he had a big pass defensed on a jump ball to Kelvin Benjamin in the end zone. Benjamin has seven inches on Claiborne, but he still got a hand in there and made a play.

That play was just about the only defensive play made all day.

Offensively, the Jets were stagnant. After the first quarter, the Jets had mustered only one yard of offense. The offensive line that appeared to be turning it around a couple weeks ago played disastrous today.

On Josh McCown’s first interception, Kelvin Beachum allowed a defender to be in his face practically as soon as the ball was snapped, and McCown had to force the ball into a good mismatch between Jermaine Kearse and a linebacker, but he shorted the throw. If he had had more time, that could’ve been a big play.

Todd Bowles’ calling card as a coach is hard-nosed defense. Today, the Bills did whatever they wanted. This was not Tom Brady shredding our defense despite tight coverage, this was Matt Barkley and the Bills having fun and completing a touchdown to their left tackle to put the Bills up 24-0. Everyone in the Jets’ front seven was ineffective today, with the exception of Avery Williamson, who has been solid all season.

During the press conference, Bowles wore the face of a man defeated. Bowles is a man of few words in interactions with the media, and today those words were “Everyone coached bad, everyone played bad.” When asked about if there were any positives to take away from the game, he replied solemnly “We only got one penalty.”

When Rex Ryan was on the hot seat, his team showed out and had the games of their lives. Bowles’ job was never in danger as much as it is right now, and his team barely appeared to show up to the stadium.

Despite their play, the best players on the defense insist Todd Bowles is there man.

“Regardless of what happens we have to come out and play for our coach” said Avery Williamson. “I’m behind Coach Bowles now and until the end of the season.”

‘I like to stick with people, whether they’re coaches or teammates.” said Leonard Williams.  “We’re on our way to building something here. I believe in everyone here, but today we didn’t have it.”

“TBowles[Todd Bowles] isn’t the problem. I ride with TBowles.” said Jamal Adams. “TBowles isn’t suiting up and getting on the field and making mistakes. I stand by TBowles.”

On a little positive note, Jamal Adams was a great leader today, making sure to high-five players coming off the field regardless of the prior on-field situation. He was flying around the field all day, and getting hyped after any big play by the defense.

When reporters asked him if anyone on the team was quitting, he seemed to take it personally, responding “No. Not that I know of. Not on my watch. As long as I’m alive this building won’t quit.” That’s what you like to hear from a leader.

Willie Colon summed it all up best during a post-game show; “The Bills came out swinging. The Jets came out wearing kitchen mitts.” The Jets will have the next week off to figure things out and take a hard look in the mirror as a franchise. After that, it’s home vs. New England, 1 p.m., two weeks from today.

Hopefully they leave their kitchen mitts at home.