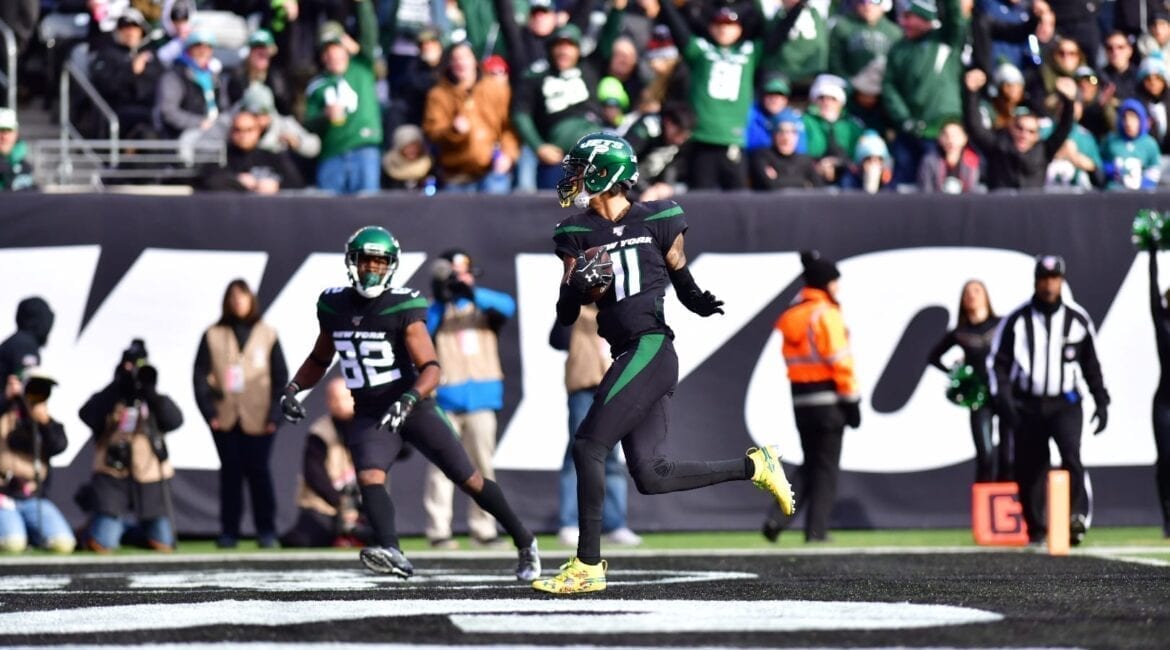 The Jets rebounded from an atrocity in Cincy, coming from behind to take down the Dolphins and improve to 4-1 over their past five games.

Notes: Darnold put forth a decent statline in Week 14, completing 20 of 36 passes for 270 yards, two touchdowns, and one interception, averaging 7.5 yards per attempt and posting an 86.6 passer rating.

Those numbers are extremely average, and that is a good way to sum up Darnold’s performance against Miami. He made a handful of stellar throws, but also threw a brutal interception and misfired on some downfield shots to an open Robby Anderson. Darnold also had some plays in which he failed to get the ball to open receivers in the short range, particularly a couple in which he rolled out and tried difficult throws down the sideline instead of checking down for easy firsts.

Robby Anderson was excellent yet again, grabbing seven passes for 116 yards and a touchdown. Anderson made a bunch of spectacular grabs in the intermediate range for the third consecutive game, and was open for at least 40 more yards of intermediate production had Darnold hit him when open (although they were tough throws that are generally completed less than 30% of the time).

Anderson ranks fourth in the NFL with 303 receiving yards over the past three weeks.

The pass protection deserves some credit as well. Darnold was sacked just once and knocked down only three times. Darnold is now 9-4 (.692) when being sacked twice or less, better than the league average win percentage of .629 when allowing two sacks or fewer (since 2018).

Rushing touchdowns: 6 (T-26th) – more than only Detroit and Jacksonville

Notes: Even when it seems like the Jets are running the ball better, they still are not effective. Adam Gase went ground-and-pound throughout much of the afternoon against Miami, and it was successful at times, setting Darnold up with some short third down situations. Nonetheless, the Jets ended up getting lackluster results, as Bilal Powell and Ty Montgomery combined for 3.8 yards per attempt with 105 yards on 28 carries. The Jets posted a rush offense EPA of -4.44. That mark is worse than the per-game average of the team ranked last in that category, the Steelers (-4.24).

Despite the mediocre efficiency, both backs ran well, especially Powell, who consistently carved out some healthy yardage up the middle.

It is ridiculous how bad the Jets offensive line has been in the run game. Joe Douglas needs to invest heavily in the improvement of that group. The addition of one or two strong blocking tight ends would also be huge, as this group is not getting it done in that phase. Trevon Wesco’s blocking has been highly disappointing.

Notes: It was a decent performance for the Jets offense, although they probably should have been expected to produce significantly more given who the opponent was. Miami has allowed the most points per drive this season (2.59), and had yielded at least 31 points in each of its past three games.

Notes: Without Jamal Adams, Brian Poole, or Arthur Maulet, the Jets put out a secondary reminiscent of the group that spent a lot of time together in the preseason. Gregg Williams played a bend-but-don’t-break approach, and it worked out. The Jets allowed Miami to move the ball with ease all game, but they limited the Dolphins to seven field goals and no touchdowns. Ryan Fitzpatrick helped the Jets out with an awful performance, but Gregg deserves credit for orchestrating yet another performance that was greater than the sum of its parts.

Notes: As a team, the Dolphins put up decent rushing numbers on the Jets’ world-wrecking run defense, running 26 times for 122 yards (4.7 per attempt). However, most of that work was done by Fitzpatrick, who scampered seven times for 65 yards. That was the second-best total of Fitzpatrick’s 153-game career. His best mark was also against the Jets: 74 yards on October 3rd, 2010, a 38-14 Jets win in Buffalo while Fitzpatrick was a member of the Bills.

The Jets kept Miami’s depleted backfield in check. Patrick Laird and Myles Gaskin combined for 53 yards and two first downs on 19 carries (2.8 per attempt and 10.5% first down rate). Quinnen Williams, Steve McLendon, Folorunso Fatukasi, Henry Anderson, and Kyle Phillips continue to dominate the ground game up front. James Burgess did a good job taking advantage of the space created by the defensive line, cleaning up quite a few Dolphins runs for short gains.

Percentage of drives resulting in a turnover: 8.9% (28th)

Notes: The Jets jumped from 29th to 13th in red zone defense after holding Miami out of the end zone on six red zone drives.

On the whole, the Jets continued to do exactly what they have done all season. Dominate the run, use bend-but-don’t-break coverages to take pressure off the corners, and make the opposing quarterback lose the game.

Miami did lose DeVante Parker (who led the NFL in receiving yards over the previous four weeks) early in the game, but the Jets were playing with a preseason-quality secondary behind the third-string linebacker core they have been running with for weeks. It took some help from a bad journeyman quarterback, but the Jets outperformed their talent level once again.

Gregg just keeps getting it done.