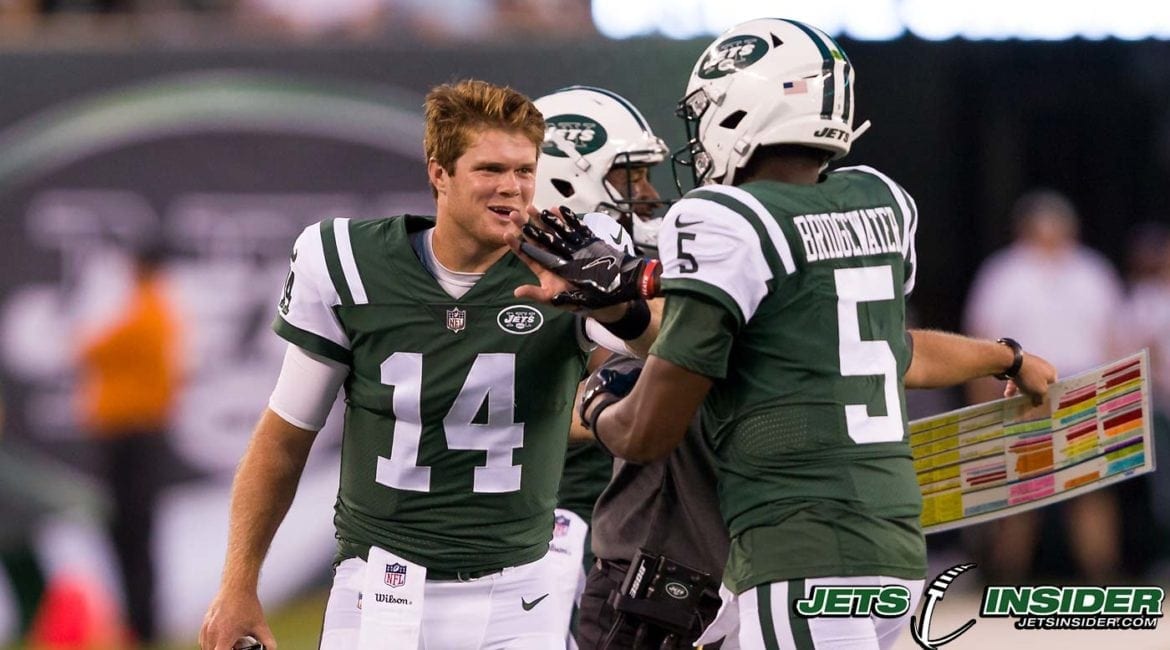 EAST RUTHERFORD, NJ – The first week of preseason went smooth for the New York Jets as they shutout the Atlanta Falcons 17-0. The biggest story coming into the game was the quarterback competition, which did n0t disappoint. Josh McCown played the first series and then expectantly headed back to the sideline for the rest of the game.

Teddy Bridgewater came in and showed flashes of starting quarterback material. In his two series of play he massed two scoring drives. The first one was methodical, mixing a good amount of both run and pass plays. With a fourth-and-three on the Falcons 40-yard line the Jets went for it, and it paid off. Bridgewater’s six yard completion to Jermaine Kearse kept the drive going. Moments later he found Isaiah Crowell wide open on a crossing route for a touchdown. Crowell headed back to the locker room following the play and was later evaluated for a head injury.

In Bridgewater’s second drive he went 10 plays, 60 yards and ending with a 45 yard field goal by Taylor Bertolet. Cairo Santos would not play in the game due to leg tightness. Overall Bridgewater finished 7-8 for 85 yards and one touchdown. He looked comfortable in the pocket and made smart decisions with every throw. The trade stock for Bridgewater certainly went up after his performance.

“I felt great. It was an awesome feeling. I was at peace and so excited to be out there with the guys. Its a group of guys who are passionate about what we’re doing,” Bridgewater said following his impressive performance.

With 8:41 in the second quarter and the Jets up 10-0, Sam Darnold entered the ball game and was greeted with a loud standing ovation from the crowd. On his first drive he stood tall in the pocket and completed a third down throw to Neal Sterling. The drive would stall but Darnold was just getting warmed up. In his next possession he would lead a 10 play, 64 yard drive in just under two minutes. After a drop and an offensive pass interference by Charles Johnson, Darnold delivered his first NFL touchdown, a 14 yard strike to Johnson in the front right corner of the endzone. All smiles from the kid as the score put the Jets up 17-0 going into the half.

“I was more anxious than nervous. It was just awesome to work with the guys and come out here and see it come in fruition. I felt like I played pretty good. I tried to get it in the hands of our playmakers,” Darnold said. “I took care of the football and that’s my main priority.”

On the defensive side of the ball Nathan Shepherd was a name that stood out in the first half. Though he only had two tackles, both were for losses and both exemplified his run stopping ability. The Falcons first team offense with Matt Ryan only stood for one possession but ended up losing six yards on the drive and punted away.

In total the Jets gave up 254 yards of offense. They allowed only 49 rushing yards. No matter if they were going up against first, second, or third-string players, the defense came to play. If the interior defense can remain this strong throughout the regular season then the options to use more safety blitzes might be in the cards.

As for their special teams play the kick return duties were split between Trenton Cannon and Andre Roberts. Cannon muffled a punt in the third quarter on the Jets five-yard line but was lucky to have it recovered by one of his teammates. He then followed that up by muffing another punt midway through the fourth quarter. He was lucky to get both back but that should ultimately end his chances of being the punt returner for regular season play.

In the second half there was little to nothing doing for both teams. The Falcons fourth-and-two attempt early in the fourth quarter from the five-yard-line was unsuccessful as Derrick Jones was ready in coverage for the fade route.

All in all there were plenty of positives to take away from tonights ball game. Sam Darnold looked comfortable and fresh in the pocket, throwing for 13-18 and 96 yards with one touchdown. Bridgewater showed signs of starter material. On the other side of the ball the defense looked hungry and active. Its game one of preseason, it doesn’t mean anything in the long run, but a nice start nonetheless.

Jets Injuries Are Piling Up Powell To Ir,Preview And Predictions,Watch Breaking Down Jets Vs Jaguars,Checking Up On Jets Statistical Rankings Post Week 13,Time To Weigh In On The Favre Situation Thats Entertainment,Rookie Watch Wilson Starting Who Is Jeff Cumberland,Folk Lore Jets Kicker Having A Magical Season,Just A Little More A Few Thoughts On The Jets Running Game Plus Jim Leonhards Injury,Jets Insiders Friday Fantasy Focus,It Wasnt In The Cards Jets Lose 37 14