Defense thrives in 7-3 Win vs. Titans 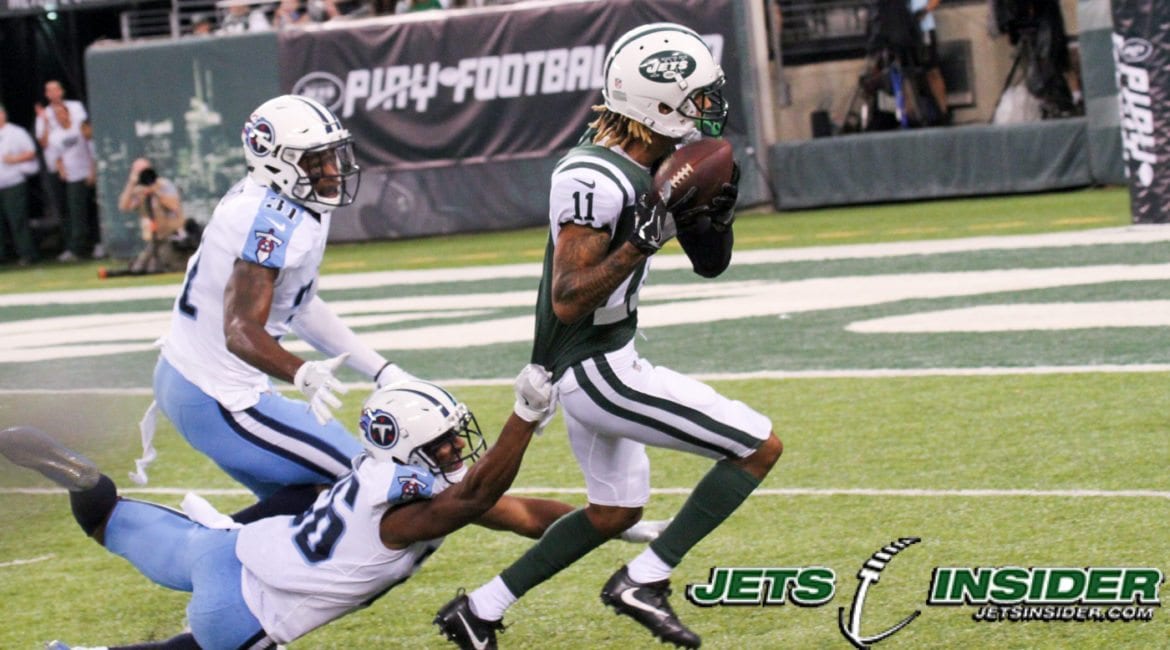 NFL football is back!

Or at least preseason NFL football is back. The New York Jets hosted the first of four preseason games on their schedule against the Tennessee Titans. It was a game that was dominated by defense, as the offense of both teams never sustained a decent drive. The opening drive was the only drive the Jets needed as they defeated the Titans 7-3.

The Jets received the ball at the start after the Titans elected to defer to the second half. Josh McCown started under center for New York and made the most of his only drive in the game. He zipped the ball to Jalin Marshall for 12 yard to extend the drive on a 3rd and 10. Then he lobbed a pass to Robby Anderson, who burned two defenders downfield, for 55 yards to set up a first and goal for the Jets. The drive concluded with a 4-yard pass from McCown to Charone Peake that put New York up 7-0. McCown finished the game 3-4 for 72 yards and one touchdown. Head coach Todd Bowles was pleased with the drive.

“It was good to see. It was a good start for the guys, especially some of the younger guys that were out there. We just have to keep building.”

As for Christian Hackenberg and Bryce Petty, their snaps weren’t as productive. Although Hackenberg proved to be consistent, completing 13 of 17 passes for over 100 yards, none of his passes stood out. Most of his passes were either short ones to the running backs or medium ones to receivers. Hackenberg only threw the ball down the field three times, none of which were completed. He also had some miscommunication with the center on a snap and fumbled the ball that the Titans recovered. That was it for Hackenberg’s day, and Petty was brought in. While he didn’t turn the ball over, he too was unable to sustain a long drive down the field. Petty took some hard sacks while on the field.

The Jets defense was the discussion of the game, and it had every right to be. When a team records eight sacks, it gets everyone’s attention. Leonard Williams recorded the first sack against Marcus Mariota on the Titans’ opening drive. Josh Martin had the most sacks, with two against Alex Tanney. Martin also had a fumble recovery after Anthony Johnson forced Tanney to cough it up. Ronald Martin record an interception at the goal line that kept Tennessee from taking the lead in the fourth quarter. Even though Bowles was proud of his defense, he pointed out some improvements they can make.

“They had eight sacks, but that’s not indicative of how they played. I thought some run holes were open and some people mishit some runs, but overall, we held them to three points. There are things to get better at.”

Of course, the Jets’ defense wasn’t perfect. If that was the case, the Titans wouldn’t have scored, but they did. It came during the third quarter when Tanney threw the ball to Taywan Taylor who caught it inside the 20. However, Taylor got up and continued to run towards the end zone for a touchdown. The play was reviewed and reversed after the referees concluded Taylor had touched the Jets defensive back’s helmet when his knees hit the ground. It set up a 32-yard field goal that was the Titans’ only score.

With the win, the Jets kick off the preseason at 1-0. Next Saturday, they’ll head to Detroit, Michigan, to play against the Lions. Kickoff is set for 7:30 pm. Be sure to check back in to JetsInsider for training camp updates throughout the week.