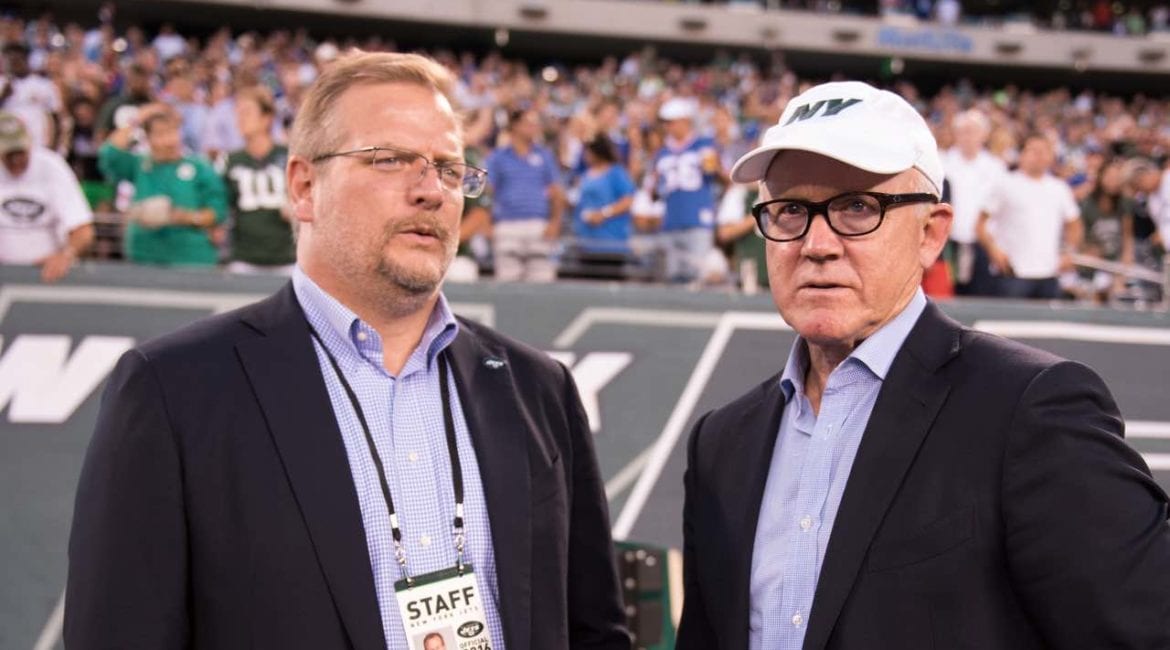 FLORHAM PARK, NJ – General manager Mike Maccagnan took my advice (okay, not really but he at least agreed with the advice I gave him that he never actually saw/heard) and has decided to burn everything down and start what will/should be a slow, methodical rebuild. In other words, he’s going to attempt to perform an Idzik and hope he doesn’t see fans paying to fly plans over practice calling for his job.

Make no mistake, this is the right move. It was the right move when John Idzik tried it, but the impatient nature of entitled fans pressured – the easily influenced by public perception and historically impatient owner – Woody Johnson to pull the plug before Idzik’s plan even had a chance to take shape.

This situation is a little different though, but that difference might be enough to give Maccagnan the chance that Idzik never got. Idzik decided to do a full rebuild – and it certainly didn’t help that he whiffed on numerous draft picks – but what really did him in was the fact that he and Rex Ryan were working against each other. Idzik wanted to build for the future, Ryan knew he needed to win immediately to save his job. The two different approaches created an impossible working relationship and Johnson decided they both needed to go. You can cling to Idzik’s failures to justify his firing if you’d like, but he absolutely had the right plan. He just simply didn’t execute it well enough. Maybe he would’ve been able to if given more time, maybe he would’ve continued to make mistakes.

This notion that a New York fan base won’t tolerate a rebuild is ridiculous, obviously they’ll voice their complaints as loud as they can but that’s just what they do. The complaints are just as loud when the team is perpetually swimming in mediocrity, so suck it up and be awful for a couple of years as you build a strong and lasting foundation that can one day lead to sustained success. Time and time again we’ve seen the reload and plug holes on the fly all in the name of trying to compete now leads to the same place, failure. Sure occasionally the stars can align for a mildly successful season, maybe even a playoff win or two, but all that gets you is being just good enough to watch your good players lose value while you’re not bad enough to bring in enough good young players whose value will continue to increase. So, yeah the fan base won’t tolerate a complete rebuild, until they do because they have no choice if the Jets don’t give them a choice. Let the fans be angry, focus on successfully completing a full rebuild then the fans might actually be thrilled with this team for once.

Maccagnan has purged this roster of players whose price tag exceeded their value and honestly they are no worse for any of these decisions except for one of them. Darrelle Revis, Nick Mangold and Nick Folk have had incredibly successful careers with the Jets, but they’re not the same players Jets fans are used to watching. Their contracts were way overvalued and the Jets can get similar, possibly even better production, from players for far less money. Fans won’t even miss Breno Giacomini, Erin Henderson and Ryan Clady. The only player the Jets released that will make them a lesser team next year is Brandon Marshall, but as good as a healthy Marshall is it wasn’t going to be good enough to make a big enough difference and with him turning 33 later this month his value will decrease by the time the Jets could possibly be good enough to make a serious run in the playoffs.

No one wants to go through a complete rebuild, but delaying the inevitable or trying to cut corners in the name of “being competitive” is counterproductive and will always lead you right back to failure. You can’t be scared to burn it all down and start over, you can’t settle for mediocrity. If you want to be great, you need to destroy and rebuild and Woody Johnson (and/or his brother) just need to have the patience to actually see the plan through this time.