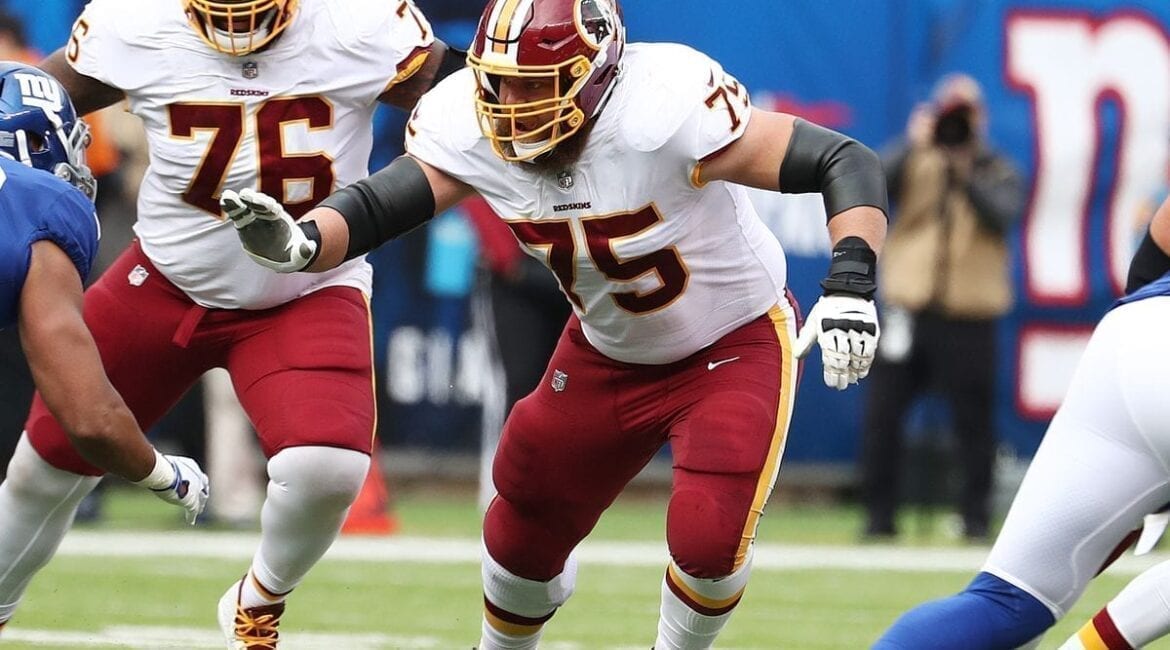 We begin running through potential free agent targets for the Jets, starting things off with one of the headliners of the offensive line market — right guard Brandon Scherff.

Scherff has consistently posted strong grades in both facets at Pro Football Focus. Seen below are his career PFF ranks amongst guards with at least 500 snaps.

Scherff has gradually improved into one of the best pass-protecting guards over his tenure in Washington. In spite of his average-ish pass-blocking grades, he has allowed low pressure numbers on a consistent basis, getting better each season. Seen below are his career ranks in pass-blocking efficiency (per-snap pressure rate allowed with greater weight to sacks) amongst guards with at least 200 pass-blocking snaps.

Scherff had trouble with penalties in 2019, committing nine over just 643 snaps (11 games). However, he was excellent at avoiding penalties in his third and fourth seasons, committing just two in each season over a combined 1,373 snaps (22 games).

Injuries are the main concern with Scherff. After starting all 33 possible regular season and playoff games over his first two seasons, Scherff has played in just 33 of 48 (68.8 percent) possible games over his past three seasons. He was placed on injured reserve with a torn pec in 2018, and then hit I.R. again in 2019 with elbow and shoulder injuries.

Scherff’s bread-and-butter is brute force in the run game — something the Jets have desperately lacked over the past couple of seasons. Watch here as Scherff (right guard, #75) tosses the three-technique defensive tackle to the inside, clearing a lane for Adrian Peterson to pick up a healthy five yards.

If Hale Hentges (tight end, #88) executed his block better, that run probably would have gone much further (TE blocking matters!). Nevertheless, a dominant block by Scherff paves the way for a solid pickup on first down. The Jets simply do not have anybody that creates some of that push like Scherff does in the above play. That is the primary reason they struggled so badly to produce big running plays. Gaping holes were never there for the runners to shoot through since there was not a difference-maker on the interior. Scherff is that guy. He opens up those truck-sized lanes on a consistent basis.

On this play, Scherff shows off some mobility. He does a good job holding the three-technique to the inside until the center can get there, then hits the second level and controls the linebacker.

If Scherff shakes free of Washington and hits the open market, then YES, YES, YES. The Jets need to be all over him. This team is facing a five-position rebuild on the offensive line, currently lacking a single reliable piece on a unit that makes up nearly half of the offense. What better way to kickstart the rebuild then by adding one of the league’s best guards in his prime?

Due to recurring injury issues over the past three seasons, Scherff would be a legitimate gamble at the price tag he will demand, but the Jets are not in a place where they can be picky on the offensive line. They are in dire need of some reliability in front of Sam Darnold before his rookie contract runs out. While Joe Douglas will likely add a large influx of young talent through the draft, the 2020 offense will find itself in rough waters if it is without at least two solid veteran starters to hold the fort down.

Scherff could very well bust, but chasing him is worth a shot for this particular franchise. He is a great player at the team’s greatest position of need. Give him your best offer.