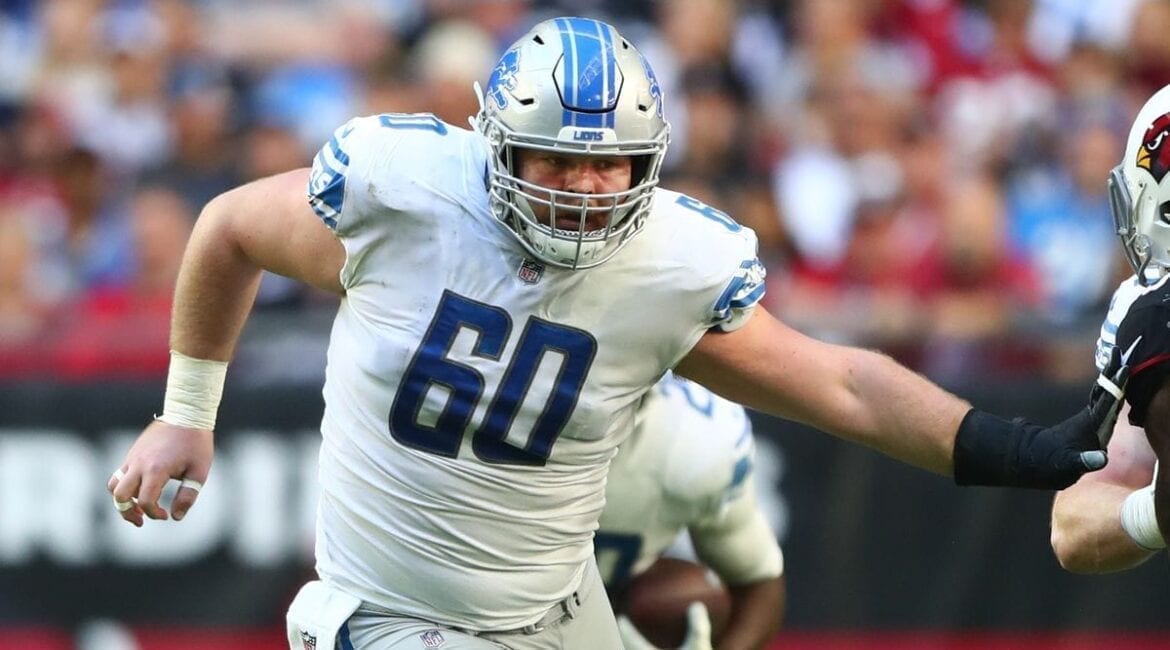 We continue rumbling on through the trenches, scanning through free agent offensive linemen who could make life much more fruitful for Sam Darnold and Le’Veon Bell. Today we take a look at versatile interior lineman Graham Glasgow.

In his rookie season, Glasgow was a versatile backup, starting seven games at left guard and five at center (including a Wild Card loss in Seattle).

In 2018, Glasgow moved to center full-time, starting all 16 games and missing only one snap over the course of the year. With a 70.8 overall grade, Glasgow ranked 11th out of 34 qualified centers, checking in at 15th in pass protection and seventh as a run blocker. He placed middle of the pack in pass blocking efficiency (pressure rate allowed with greater weight to sacks), sitting at 18th out of 34 with 21 pressures allowed over 628 snaps in protection. Penalties were a minor issue as Glasgow ranked second at the position with nine.

Following the retirement of veteran right guard T.J. Lang and the drafting of center Frank Ragnow, Glasgow moved over to right guard for the 2019 season, where he would start 15 games (he missed one game with a back injury, snapping a streak of 50 straight starts). He played the position at Michigan, but had never manned the right guard spot in an NFL game prior to 2019, including the preseason.

Glasgow continued to grade out well at his new position, earning a 74.1 overall grade that ranked ninth out of 66 qualified guards. He remained merely decent in pass protection, ranking 33rd in pass blocking grade and 27th in pass blocking efficiency (25 pressures, 520 snaps), but his 74.2 run blocking grade ranked sixth-best at the position. Glasgow also cleaned up in the penalty department, being called for only three (fewer than 38 other guards).

The Lions had an interesting approach to the guard positions in 2019. Glasgow played 100% of the offensive snaps in only four of his 15 starts, and even played fewer than 80% in five games. Detroit employed a rotation of sorts, using backup guard Kenny Wiggins to spell Glasgow and left guard Joe Dahl for one series apiece in each half.

Glasgow is remarkably consistent in the run game, and it is his hand usage that stands out to me as the primary reason why. He does a great job working his hands into good position on a frequent basis, and once he does get his hands into a defender, it is usually over. Opponents have a very rough time shedding Glasgow’s blocks, as he is able to latch on and use his power to keep them in check.

Here, Glasgow (RG, #60) forces Chris Jones away from the point of attack and keeps him at bay, preventing any sort of disruptive penetration. Check out the “flash” technique from Glasgow upon the snap. He feigns a punch to get Jones to attack, thus exposing his chest. Glasgow then works his outside hand into Jones’ chest, moving him off the ball and stymieing any opportunity for him to affect the play.

Glasgow again works his hands inside and works the tackle to the outside, clearing the point of attack for a seven-yard gain.

Glasgow is an extremely unique target, having showcased the ability to bring quality play at all three interior positions.

It is unclear whether Glasgow will head into the market with a positional preference. If not, the Jets could feel comfortable about locking him up, letting everything play out, and throwing him into the spot where he is needed most. This could make him the perfect Day 1 free agent target. Sign Glasgow, pursue whomever else you want to pursue, draft whomever you want to draft, and throw your versatile chess piece into the last vacated musical chair.

Durable, in his prime, and able to produce at three positions of dire need for the Jets, it is easy to deduce that Glasgow is worth pursuing. As with any free agent pursuit, how aggressive the Jets go after him will come down to whether they deem the player worthy of the price that the market sets for him.