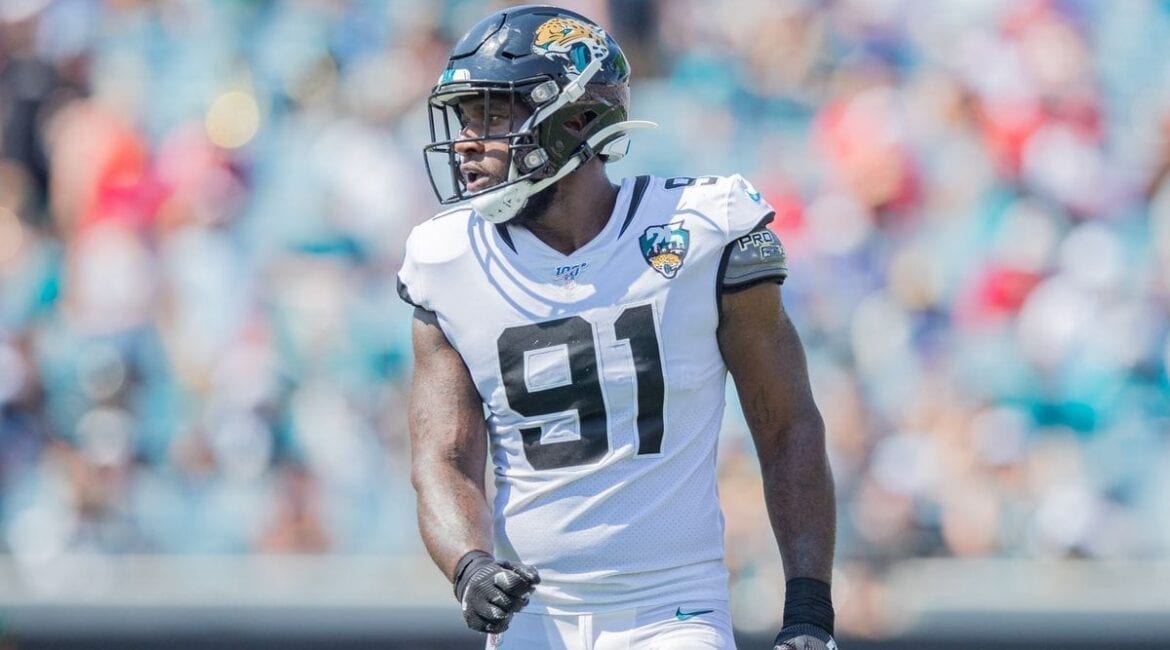 After taking a look at seven potential free agent offensive line targets for the Jets, we move on to the other side of the ball.

We kick off with arguably the top pass-rusher on the market: Yannick Ngakoue.

Ngakoue has been tremendously durable over the course of his career, playing in 66 out of 67 possible regular season and playoff games for Jacksonville. He missed his first and only career game in Week 2 of this past season with a hamstring injury.

Run defense has been an issue for Ngakoue. He has never ranked higher than 82nd at his position in PFF’s run defense grade in any given season. In 2019, he checked in at 116th (out of 124) in the stat. Missed tackles are a big problem. Ngakoue has ranked as one of the top-15 least-efficient tacklers in the run game among edge defenders in each of the past two seasons. Against the run over the past two seasons, Ngakoue has missed a whopping 12 tackles versus just 40 converted tackles.

Ngakoue has owned the Jets over his short career. In three games against them, he has picked up 16 total pressures — five sacks, one hit, and 10 hurries.

Ngakoue has the complete package of pass-rushing tools off the edge. Here, Ngakoue (right defensive end) smokes Kelvin Beachum (left tackle) and gets home for the sack on Josh McCown (Week 4, 2017). He swipes away Beachum’s inside arm, clubs him on the outside shoulder, and rips underneath to get home.

Watching that play is a bit melancholic from the perspective of a Jets fan. When was the last time they had an edge rusher capable of chaining moves in such beautiful fashion?

Sam Darnold has felt Ngakoue’s wrath in two contests over the past couple of years. On this play, Ngakoue (left defensive end) barrels Brandon Shell (right tackle) into the pocket for a sack. Ngakoue stabs Shell with a long-arm directly in the chest, walking him into Darnold.

You’ve already seen technique and power, now how about some speed? Here, Ngakoue (right defensive end) leaves Chuma Edoga (left tackle) in the dust for a sack. Rushing from the wide-nine, he dips underneath and bends the corner to win, getting just enough of Darnold for the sack.

Ngakoue is going to be pricey, but he would patch a gargantuan hole the Jets have had in their defense for years.

In 2019, the Jets’ leader in pressures was Tarell Basham, with 39. That total ranked 62nd among all players and 48th among edge rushers. Think that’s bad? Well. . . that was the best the Jets had gotten in a long time. The only time in the 2010s decade that a Jets edge rusher posted more than 39 pressures was 2014, when Quinton Coples had 44. That ranked 42nd at the position. Since Pro Football Focus began tracking pressures in 2006, Bryan Thomas’ ranking of 28th in pressures (41) among edge defenders in 2006 still stands as the best ranking by a Jet. Ouch.

Bad history is not a reason to over-emphasize something in the present, but it is absolutely shocking when you look back and realize just how long the Jets have been awful at a position many consider the most important on defense. Yet, even without a single premiere talent at that spot, the Jets have still fielded numerous top-10 defenses over the past decade-and-a-half. Imagine if they finally found a stud or two to line up out there?

Back to Ngakoue, I think he is worthy of the money he will demand. For the Jets, he is probably the only defensive player on the market I would deem worthy of going all-out for.

This Jets offseason is all about making up for years of neglect at positions of importance: primarily offensive line and edge rusher. While successful reconstruction of those two spots will ultimately be dependent on finding value in the draft, adding a star or two in free agency could get things trending in the right direction.