How Will Jets Defense Change With Copeland Suspension? 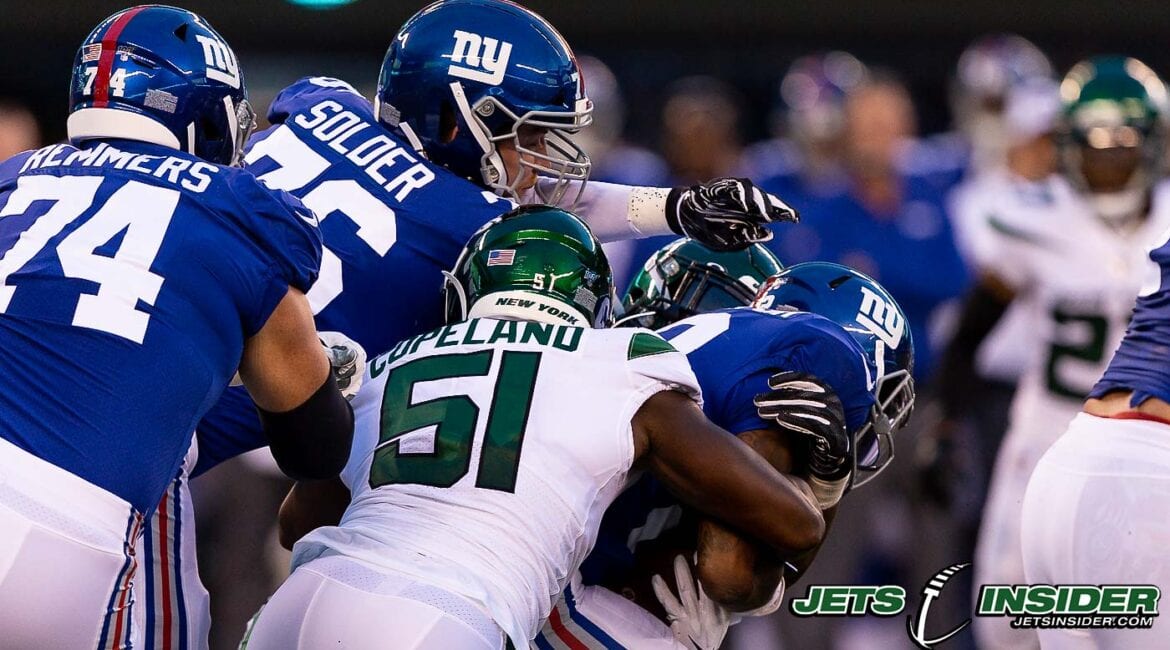 Florham Park, NJ – Jets outside linebacker, Brandon Copeland tested positive for a banned, performance-enhancing, substance and will be suspended for the first four games of the season. With inside linebacker, Avery Williamson, already lost for the season with an ACL injury, Gregg Williams will likely have to make some tweaks to his defensive scheme.

When Williams was hired many assumed the Jets defense would switch to a 4-3 base defense, but due to the makeup of the roster Williams decided he would stick with a 3-4 base. We often get too bogged down in is this defense, or that defense, a 3-4 or a 4-3 when in reality every team will run both while mostly running nickel to defend modern-day passing offenses. Williams was always going run both a 3-4 and a 4-3 along with nickel, some dime and even some three-safety sets. However, now you can see that Williams will likely have to run less 3-4 and more everything else to makeup for not having two starting linebackers.

When the Jets line up in a 3-4 Neville Hewitt will be the “starter” along side C.J. Mosley while Frankie Luvu will slide in at outside linebacker opposite Jordan Jenkins with Blake Cashman rotating in to replace Hewitt on passing downs. The drop-off from Copeland to Luvu isn’t much. Both Luvu and Copeland are really good depth players that can be solid starters but certainly not game-changers, Copeland’s absence hurts the depth at the position far more than the starting lineup.

Still, with Williamson out for the year it seemed likely that Williams would lean more on a 4-3 defense and now that Copeland will miss the first four games it seems even more likely. Luvu will certainly see his snap totals increase in Copeland’s absence but the player to benefit most from the Copeland suspension could be Tarell Basham. Basham has had an impressive training camp and now seems like a lock to make the opening day roster. Rookie Jachai Polite could also see an uptick in snaps as well but Bashman is a more polished and experienced pass rusher at the moment.

The other tweak that you could see Williams making to the defense is to use less linebackers and more secondary players. Obviously the Jets are weak at cornerback, both the starting unit and with backups, but now that Marcus Maye is back expect to see more three-safety sets. This was something Williams would have used at times even with a healthy Williamson and not-suspended Copeland, but now you could see Williams leaning on this formation even more.

This would allow Williams to either play Maye and Rontez Miles as the deep safeties, allowing Jamal Adams to freelance as more of a roaming safety. Or Williams could play Maye as the single high safety with Miles and Adams playing closer to the line. Most likely Williams will rotate their assignments throughout the game and use all three safeties interchangeably to keep the opposing offense guessing as to who will do what. All of this will give Adams more roam to operate as a player, relying on his instincts to decide what he will do in the moment and could certainly lead to more blitzes from Adams.

The loss of Williamson is far from crippling, but it’s a bigger loss than most fans want to admit. Copeland is as well just to a far lesser scale. Williams can easily adjust his scheme to cover up for missing these players so most fans won’t really notice much of a difference, but he’s going to have to lean on mixing and matching his scheme even more than he already was.