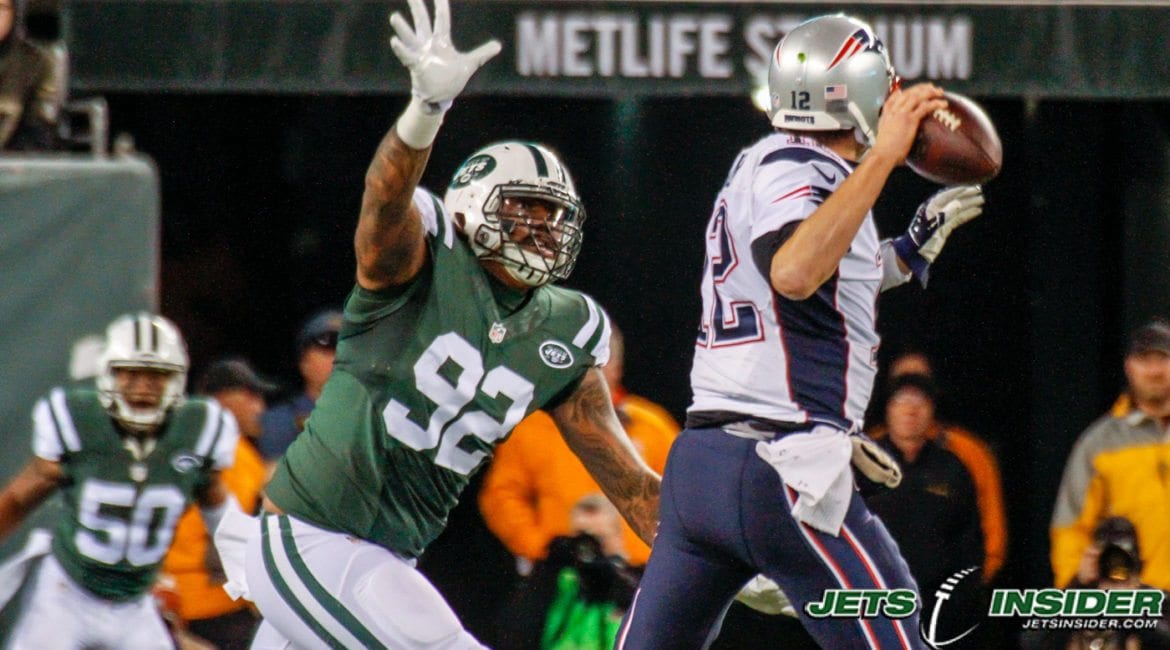 Florham Park, NJ – Walking around the locker room on Friday was interesting. There was a distinguishable buzz. It was noticeably louder than usual. Yes, the standard occurred; Rontez Miles cracked jokes with a mixture of offensive linemen and defensive backs in one corner and Austin Seferian-Jenkins blasted music in his haven with Demario Davis next to him. But this time, an heir of confidence ruled the confines.

“Everybody knows it’s New England week,” the veteran safety Miles said. “The atmosphere of the game, how many people come out to support, the families, everyone is calling.”

The Jets (3-2) enter week six tied for first place with the New England Patriots (3-2) and Buffalo Bills (3-2). Now, the fun begins. Some players don’t read into the hype. It is business-like. Seferian-Jenkins and offensive lineman Brian Winters believe it’s just another Sunday at the office. Others like Kony Ealy and Davis can’t escape it. But, you’d be mistaken to believe this group of Jets won’t be ready to face their division rival on Sunday.

“It’s a divisional game. That’s what makes it important,” Miles said. “It’s another day. You see them twice. We shouldn’t blow it out of proportion.”

What makes it important are the stakes on the line this Sunday afternoon. As one of the biggest surprise teams of the league to start the season, the Jets have a chance to pounce on a vulnerable team that has been a staple atop the division and league for over a decade. If the Jets steal one from New England and reach 4-2 in the record column, all bets are off. Call off the tank. Right?

“I think the atmosphere will be as crazy as when we played Miami and Jacksonville,” offensive tackle Ben Ijalana said. “We’ve been very fortunate to be able to feed off our fanbase and then reward them with some home wins.

“I’m hoping it’s just a sea of green,” his eyes lit up. “I want it loud, obnoxious, obviously when their offense is on the field. I live for those chances on kickoffs. I love that JETS chant.”

There’s no question this is the Jets’ best chance to take advantage of a Patriots squad that has struggled defensively out of the gate. New England is last in the league in total defense and will be without two of their top three cornerbacks on Sunday in Stephon Gilmore and Eric Rowe. With that said, the Jets still have to face arguably the greatest quarterback in the history of the sport as well as one of the smartest coaches. New York isn’t playoff material yet, but this game is critical to the development of their young and inexperienced core.

“In recent memory, it’s just tight games, score changes, really a grind,” Ijalana said. “The one with the less mistakes usually comes out as the winner.”

Aside from last season’s Christmas Eve 41-3 drubbing in Foxborough, the teams have been competitive to the final snap. In actuality, the 41-3 rout was an outlier in comparison to the previous seven contests at Gillette Stadium and the Meadowlands. Those were decided by seven points or less, including two games that were finished in overtime.

Each time a Jets player sees New England coming up on the schedule, memories come back of the rivalry through the years. One common example was the coin toss drama in 2015 resulting in a walk-off touchdown.

“That day, there was honestly so much going on,” Miles admitted. “The coin toss, that’s what I remember the most, that messed me up. They won the toss, deferred and we capitalized on it.”

Another came in Ijalana’s first year with the team in 2013.

“The penalty that occurred on the game-winning field goal. I don’t know what happened, but it was such a big win. It was so great for our fanbase,” the offensive tackle said.

That day, kicker Nick Folk attempted what would have been a 56-yard kick for the win that initially faded left. However, on the play, Patriots’ defensive lineman Chris Jones was flagged for unsportsmanlike conduct for illegally pushing a teammate into the Jets’ interior line during the field goal try. On the ensuing kick, Folk connected on a 44-yarder to win the game. It was pure chaos, something many believe will be the same on Sunday.

“I expect it to be really intense,” Davis said. “Our crowd has been phenomenal to this point. The way we’ve been playing, our crowd will be excited. So I’m excited to be out there.”

Made It Here In One Piece,Free Agent Profile Brandon Scherff,The Exorcism Of Mark Sanchez,Weekend Wrap Up Rex Tannenbaum Speak,Mcintyre And Barnes To Fill In For Coples,Jets D Stepping Up At Right Time,Jets Sign Qb Josh Mccown,Is Mark Sanchez Overrated,Midseason Evaluation Grading The Offseason Acquisitions,Jets 1 2 0 At Jaguars 2 1 0