Jets Explode to 48-17 Over Lions, Darnold Has Impressive Opening Night 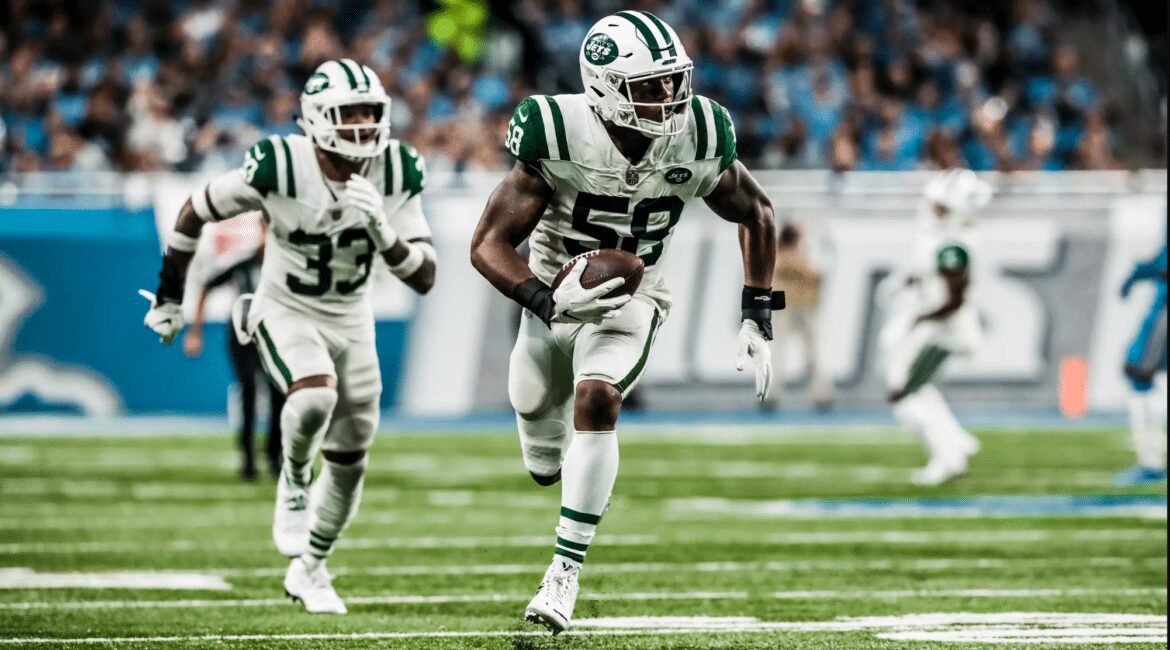 DETROIT, MI – Sam Darnold’s impressive first start, along with five interceptions from the Jets defense helped the New York Jets cruise to a 48-17 victory over the Detroit Lions on Monday night.

Darnold’s pro debut could not have started any worse than it did in the Motor City. On the first play of scrimmage he lofted a ball across the field into Lions defensive back Quandre Diggs hands, who proceeded to return it 37 yards the other way, putting Detroit up 7-0. Darnold joined Brett Favre and Jameis Winston as the only quarterbacks in history to throw a pick-six on their first NFL attempt. From there on out, the only way was up.

Darnold settled in following the pick, starting by getting back to the ground the ground game on the next possession and feeding Bilal Powell for the first run of 13 yards. Darnold looked more comfortable, hitting Neal Sterling for a 12 yard gain on third down to extend the drive. In total, Darnold would connect on 6-for-13 on third downs.

The Jets would get on the scoreboard in the next drive. Andre Roberts would set the Jets up with great field position following a 43 yard punt return. Five plays and 32 yards later Isaiah Crowell would punch it in from six yards out, tying the game up at seven.

One constant variable in the first half was the impressive defensive play from all levels. The Lions recorded just -2 yards in the first quarter while Matt Stafford was held to 10/20 with no touchdowns and two interceptions in the half. Morris Claiborne recorded the first interception for the Jets on a 20 yard deep ball to Marvin Jones that he stepped in front of. That would launch the Jets in their next drive. Eight plays and 32 yards later, the Jets would extend their lead with a Jason Myers field goal putting them up 10-7.

In the Lions next possession the Jets would get to Stafford again. On a bizarre play, cornerback Trumaine Johnson intercepted Stafford but gave the ball right back to the Lions on the same play as Kenny Golladay punched it free on Johnson’s return. The Lions recovered and started their next drive on the Jets 33-yard-line. Solid defense along with an amazing read to break up a third down screen helped push the Lions back to the 37. Matt Prater would go on to miss the 55 yard field goal, keeping the score at 10-7.

Darnold’s first career touchdown would come on the final drive before the half. Robby Anderson hauled in a 41 yard lob from Darnold with 1:22 left, putting the Jets up 17-7.

In the second half it would be all Gang Green. After the Lions came out and scored on their first possession the Jets would go on to score 31 unanswered points. Quincy Enunwa powered his way into the endzone for a 21 yard touchdown, putting the Jets up 24-17. Minutes later Darron Lee stepped in front of a slant route and returned it 36 yards for the touchdown. The pick-six was the first for the Jets since 2013, ending the 73 game drought.

Matt Stafford would leave the game briefly with a knee injury but would only miss one series. After Matt Cassel’s first drive stalled, Jets punt returner Andre Roberts would take back a 78 yard kick to the house, giving New York a 38-17 lead. Shades of Leon Washington, Roberts was able to keep his balance along the sideline and take it the distance.

Darron Lee was not done with Stafford. Lee picked off Stafford for the second time midway through the third quarter. Stafford’s fourth interception would prove to be the downfall for the Lions. He finished 27-for-46 with 286 yards, 4 interceptions and one touchdown.

The Jets would continue to pile it on. After the Lee interception led to a field goal, Isaiah Crowell busted out a 62 yard run, giving the Jets a 48-17 lead going into the fourth quarter.

Jamal Adams would later get in on the fun, picking off Matt Cassel late in the fourth quarter for the first interception of his career.

Todd Bowles has to be incredibly pleased on every level with how they played. After throwing a pick six on his first career pass, Sam Darnold bounced back and delivered a solid performance every step after. Even the offensive line played past expectations. In the first quarter they gave up two sacks. From then on out they would not give up another for the rest of the game. As for the defense, New Jack City was in full form. Five interceptions, including one pick six helped the Jets cruise to victory. Oh and they did it without Marcus Maye, who was listed with an injury. As for the special teams, the 78 yard punt return touchdown by Andre Roberts gives the Jets a new element they haven’t had in over 10 years.

A loud J-E-T-S Jets, Jets, Jets chant erupted during the fourth quarter in Motor City. For the first time in a long time Jet fans have plenty to be excited about. The Darnold era is just starting.