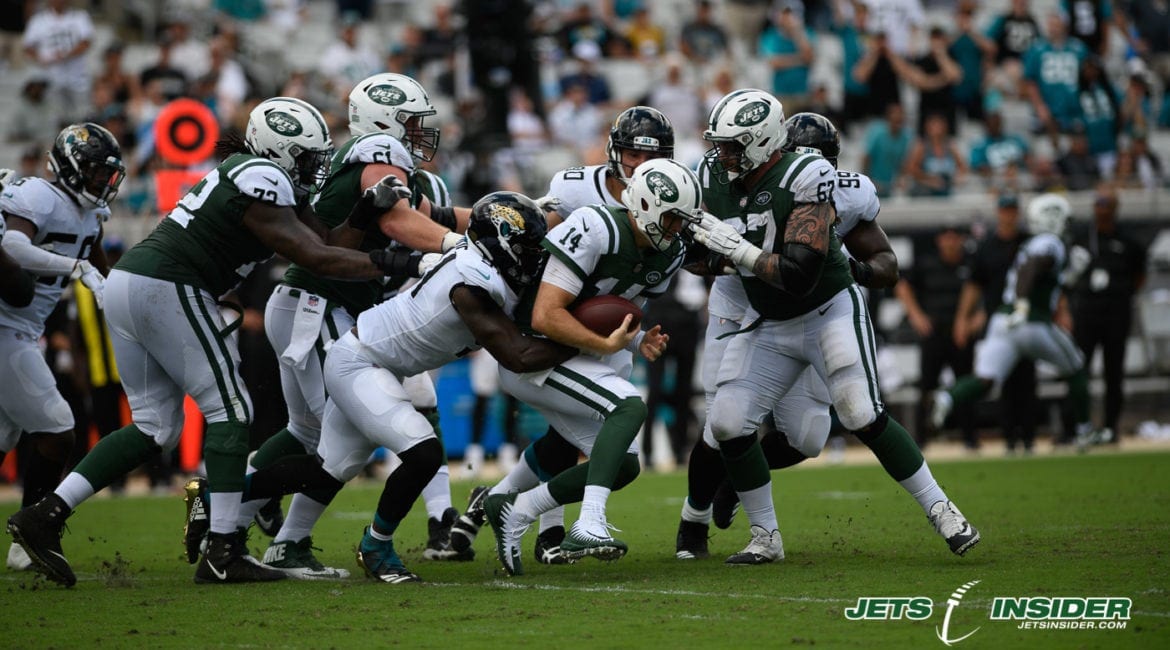 The Jets suffered their third consecutive defeat in Jacksonville on Sunday, losing 31-12 to the Jaguars.

After 11 days of preparation and rest the Jets looked about as unprepared and overmatched on both sides of the ball as they could get. The Jaguars and Blake Bortles looked dominant on offense in the first half, eating up more than double the time on the clock while also successfully scoring on all four of their drives. One week separated from a lackluster offensive performance in Tennessee, Bortles came out 11-for-11, and finished the game with 388 yards and two scores.

On defense the Jets looked backed up and on their heels the entire game. Once again the lack of pass rush was evident. The Jets recorded just two sacks, while Bortles remained comfortably in the pocket hitting wide open receivers across the field. There was no trickery, no crazy play calling on the Jags side. The shallow cross route burned the Jets all afternoon, especially on third down.

The Jags played almost the entire game without star runningback Leonard Fornette. After starting the game and getting 11 carries, Fornette was shut down for the rest of the day with hamstring tightness, the same injury that made him questionable from the start. His replacement TJ Yeldon thrived in his time. A quick drag out the backfield left Yeldon open for a catch, which he then took the distance for a 31 yard touchdown, putting the Jags up 13-0 in the second. That was a constant theme for the afternoon on defense.

As for Sam Darnold he continued to struggle. His 17-for-34 afternoon with 167 yards was not nearly enough to give the Jets a fighting chance. The Jags recorded three sacks, and constantly kept the pressure in Darnold’s face. At times he looked nervous to throw the ball, leaving some passes late and nearly picked off. In the second quarter he lofted a ball over Bilal Powell and Quincy Enunwa’s hands for would be big gains. Instead, the misses cost the Jets drives and ultimately a turnover on downs.

The Jags entered the second half up 16-0 with all the momentum. On the Jets first drive from the 2 yard line Isaiah Crowell was stuffed in the backfield for a safety, the first for the Jags since 2014. Crowell had no help on the play as two linemen for the Jags went in almost untouched.

A few possessions later the Jets would flip the script. A Bortles throw tipped by Avery Williamson landed in the bread basket of Darryl Roberts setting up shop for the offense at the Jags 23 yard line. Seven plays and 14 yards later the Jets would stall, putting up just a three spot on the scoreboard. Still down 18-3 things would not get much better for Gang Green. In the following possession, Donte Moncrief would burn Trumaine Johnson for a 67 yard touchdown down the right sideline to put Jacksonville up 25-3.

Early in the fourth quarter the Jets would have their longest drive of the game, a 50 yard trip, end once again with only three points.

In the second half the Jets defense would tighten up, but it seemed all too late. Williamson’s strip of Yeldon set the Jets up on the five yard line for Darnold to throw his only touchdown of the game to tight end Jordan Leggett.

All in all, the Jets ended with 178 yards while Jacksonville piled on 503. The Jets mustered only 34 yards on the ground while Yeldon and the Jags ran for 126 total. If there’s a silver lining, the Jets forced three turnovers while not giving the ball up once. Yeldon, Moncrief and Didi Westbrook each had 100+ total yards of offense to lead the way.

A late touchdown from Yeldon would close the game out and give the Jags a 31-12 victory.  The Jets find themselves sitting at 1-3 with a showdown at home against the Broncos in week four.