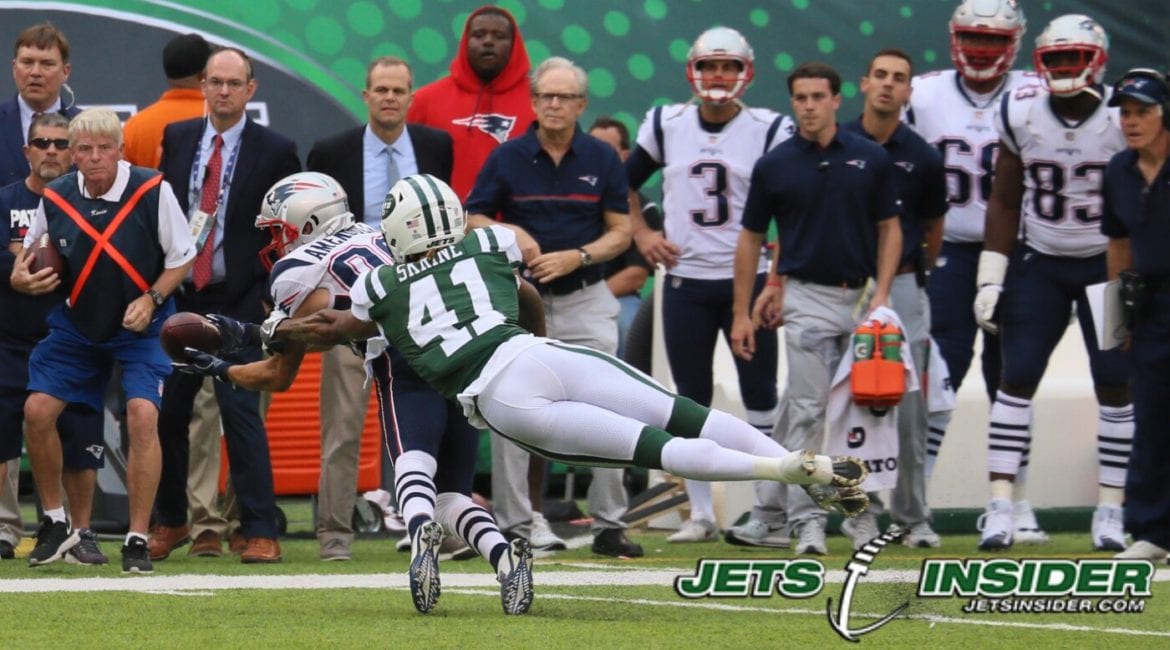 East Rutherford, NJ: The score is 24-14. Austin Seferian-Jenkins celebrates with his teammates after scoring a touchdown. Then the play goes under review. The players and crowd in Metlife Stadium are silent, patiently waiting for an answer. Finally, the head referee comes out and delivers the decision: Seferian-Jenkins lost control of the football as he went out of bounds in the end zone, therefore it’s a touchback.

Jets fans booed, Austin was in disbelief, and the Patriots got the ball back and won the game, 24-17. Head coach Todd Bowles and several Jets players spoke about what they saw from that call.

“From my angle on the replay, I didn’t see the ball fumbled,” Bowles said. “I saw it bobbled and I saw him gain control of it.”

“Other than just in the stadium, it is what it is,” Jets quarterback Josh McCown said.

“I feel like I scored, but at the end of the day, that’s what the ref called,” Seferian-Jenkins said. “I saw it like four times. I just have to have better ball security. I let my team down in that situation.”

Referee Tony Corrente explained the decision behind the call.

“The final shot we saw was from the end zone that showed [Austin Seferian-Jenkins] with the football starting to go toward the ground. He lost the ball. It came out of his control as he was almost to the ground. Now he re-grasps the ball and by rule, now he has to complete the process of a recovery which means he has to survive the ground again. So, in recovering it, he recovered, hit the knee, started to roll and the ball came out a second time. So the ball started to move in his hands this way…he’s now out of bounds in the end zone, which created a touchback. So he didn’t survive the recovery and didn’t survive the ground during the recovery is what happened here.”

But in typical Todd Bowles fashion, he was quick to not put blame on that one play.

“It’s frustrating from that standpoint, but we had other plays in the game we could have made to make up for that,” Bowles said.

Bowles can’t control the conversation about that call as the week goes on, but he does bring up a good point. The Jets struggled after scoring two touchdowns in the first quarter to get any offense going, limited to three points the rest of the game. The pass offense played well. McCown went 31 for 47 for 354 yards, two touchdowns, and two interceptions. The rush offense, on the other hand, struggled. Elijah McGuire and Matt Forte tallied 22 yards and McCown ran for 21 yards. If a team doesn’t have a balanced offense, that team will struggle to win games, as New York did.

The Jets defense had some mixed results. The cornerbacks really stepped up in the game, with Morris Claiborne breaking up passes and Buster Skrine intercepting a pass off Tom Brady, but the same couldn’t be said for Jamal Adams. Rob Gronkowski had a field day against the rookie safety, recording 83 yards and two touchdowns on six receptions. Adams accepted responsibility for Gronk’s touchdowns.

“Just gave [the two touchdowns] up,” Adams said. “Got picked on one. The one in the red zone. Brady put it on real quick. He delayed, then got it out real quick. Lost my leverage. But, on the second one, someone picked me and Gronkowski made a play.”

In addition, the defensive line didn’t get enough pressure on Brady to force a bad throw. For a team that boasts about having one of the better defensive lines in the NFL on paper, Leonard Williams, Muhammad Wilkerson, Kony Ealy and Steve McLendon still don’t have a sack this season. If the Jets’ defensive line doesn’t put more pressure on opposing quarterbacks, they will eventually find wide open receivers for big yardage.

What Did We Learn?