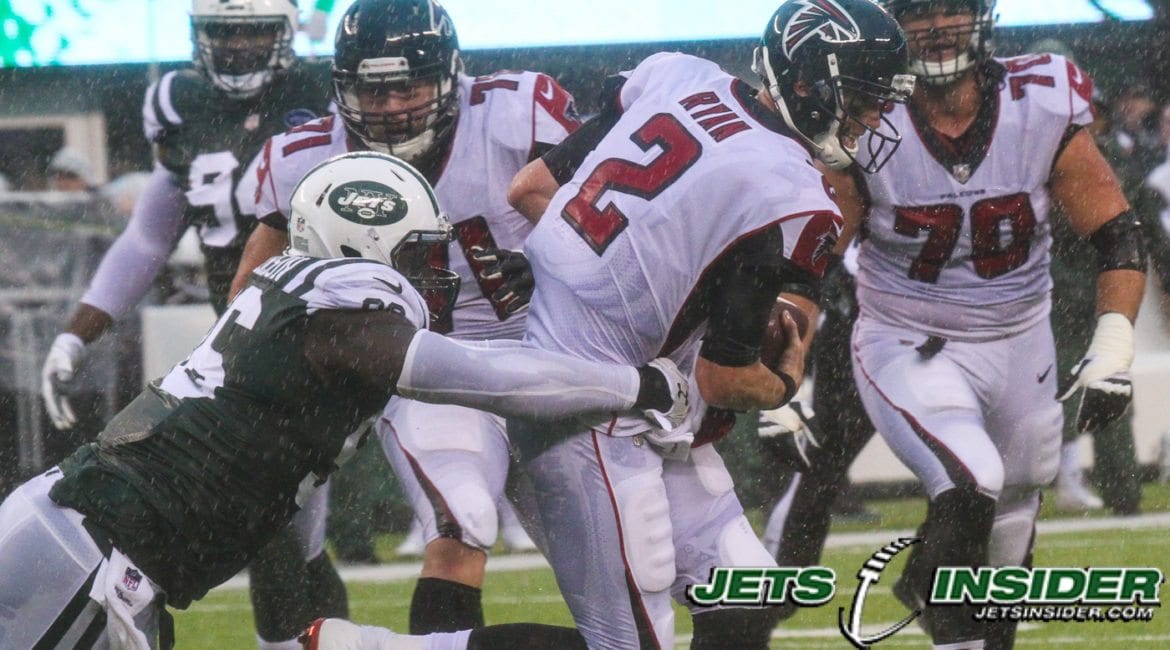 EAST RUTHERFORD, NJ – If one word could describe Sunday afternoon at MetLife Stadium, it would be: sloppy.

There were bad snaps, missed field goals, slick fumbles, head-scratching penalties, rain and a whole lot of wind. The elements plus the events that transpired on the field proved to be the backbreaker for the New York Jets in Sunday’s 25-20 loss to the Atlanta Falcons, and possibly their season.

If the Jets wanted any hope to save their season and dream about the playoffs, a win had to occur. You can resume the tank. Though New York’s young players like Robby Anderson (six receptions, 104 yards, TD) continued to show development, when matched toe-to-toe with some of the league’s best teams, their warts will come to the forefront.

“We played hard, it’s disappointing not to win, not to close it out,” head coach Todd Bowles said after his team dropped their third straight game. “Too many mistakes in the fourth quarter. Can’t have those timely mistakes. Everyone has to play their brand of football.

After the game, Bowles ran off a grocery list of things his team needed to do better on Sunday and in the future to win more games. It’s woulda, coulda, shoulda. In reality, this team isn’t ready to win more games. They lack that fourth quarter gut punch. They’re missing the fire in their bellies to keep their foot on the gas. They don’t capitalize when an opportunity is presented in front of them. Because of those traits, the Jets season is spiraling downwards, losers of three consecutive.

“We’re 3-5,” Bowles said. “Frustrated, not discouraged… We have to stop taking body blows and start delivering them.”

Week after week, the Jets are taking more blows to the chest than they could handle. It’s a matter of one or two missed chances that separates a 3-5 team from a 5-3 or 6-2 record. On Sunday, you can point your finger to a Jeremy Kerley muffed punt. You can point your other finger at two missed field goals from Chandler Catanzaro. Regardless, the Jets dropped Sunday’s tilt because they beat themselves more than the Falcons beat them.

Like the previous three weeks, the Jets offense came storming out of the gate. An 8-play, 75-yard drive that took 4:27 off the clock resulted in a 20-yard touchdown reception for tight end Eric Tomlinson. The rain-soaked sparse crowd drowned out the noise Atlanta fans made prior to kickoff. However, like the previous three weeks, the positive vibes ended quickly. Despite a Matt Ryan fumbled snap, the Jets failed to capitalize as Catanzaro’s 46-yard field goal attempt sailed wide right. Here they were again.

On cue, Ryan marched the Falcons downfield, connecting with tight end Austin Hooper three times, the last being a one yard touchdown reception.

After a 44-yard punt from Lachlan Edwards on a quiet New York drive, Ryan fumbled his second snap of the rainy afternoon setting up the Jets in plus territory once again. This time, however, the green and white cashed in, converting a 43-yard field goal to put them ahead 10-7 starting the second quarter.

Atlanta responded after the Jets put points on the board. A 12-play, 75-yard drive ended with a Matt Bryant 23-yard field goal to tie things at 10. However, the Falcons manufactured their points without incorporating wide receiver Julio Jones in the action. With Morris Claiborne lining up against him, Jones was held without any receptions, though being targeted three times. Claiborne left the game early with a foot injury and X-rays came back negative.

After back-to-back punts followed Atlanta’s scoring drive, McCown came back and connected with Bilal Powell and Anderson with less than five minutes remaining in the first half. The signal caller then found a streaking Anderson down the sideline for a 24-yard score, his third in as many weeks, to put the Jets ahead 17-10.

“It was just in man-to-man coverage, saw him out there,” McCown said about Anderson’s touchdown. “Because of his speed, they were bailing on him and was able to push the ball down there to him. Given these conditions, those guys made unbelievable catches.”

Atlanta drove downfield thanks to some help from a questionable unnecessary roughness penalty on Darryl Roberts and trimmed the deficit at the intermission to four points, 17-13.

New York failed the get anything off the ground in the second half, which has been the primary issue the last several weeks. Three punts, a missed 48-yard field goal and impactful penalties allowed the Falcons to storm back into the game and score 12 unanswered points to pull ahead, 22-17. Though Catanzaro drilled a 46-yard field goal to inch closer, a muffed punt from Kerley crippled the Jets chances of coming back in Sunday’s contest.

Joe Barone is a staff writer for JetsInsider.com. He can be reached on Twitter (@28Joebarone) or via email (joebarone28@gmail.com)