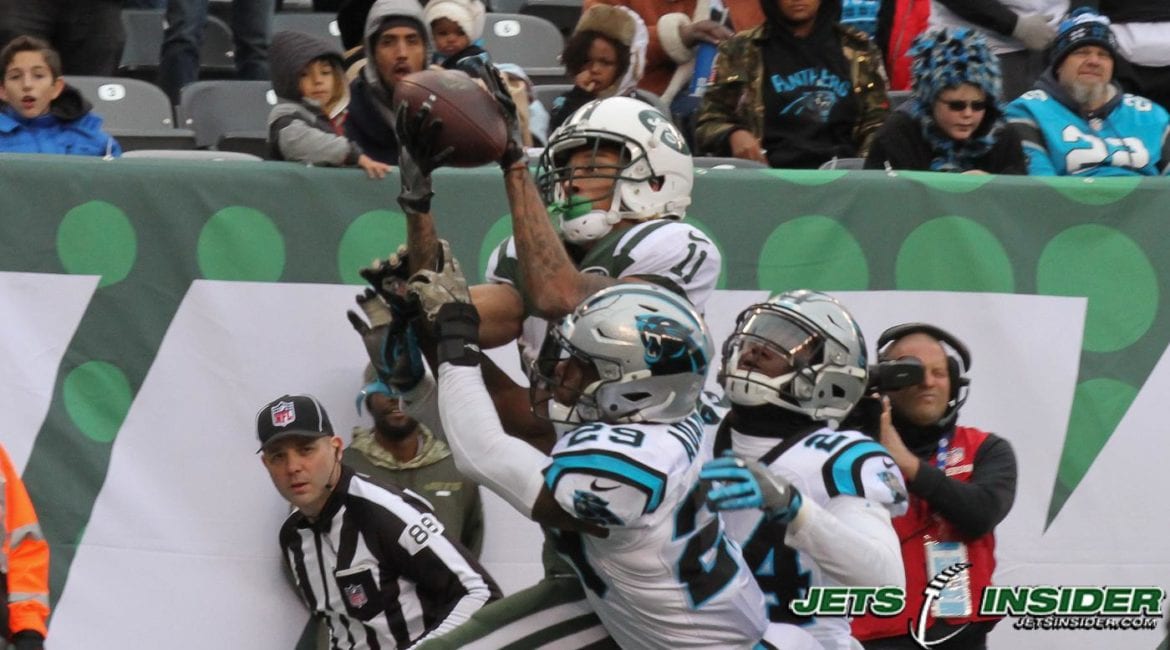 East Rutherford, NJ – The New York Jets can’t turn their luck around as they lost to the Carolina Panthers, 35-27. This loss is their sixth out of the last seven games.

The Jets played well all around in the first quarter. They limited the Panthers to 69 total yards in the first, holding Cam Newton to 50 passing yards and Christian McCaffrey, Jonathan Stewart, and Newton to 19 rushing yards. The Panthers did manage to kick a field goal to take a 3-0 lead on their first drive, but the Jets responded. They moved the ball through the air, first with Jermaine Kearse for 17 yards and then Robby Anderson for 20 yards. They ended the drive with a 31-yard field goal and tied the game at 3 heading into the second quarter.

Carolina broke the barrier around the end zones first. Newton rolled out to the left, shedding of a tackle on the way to the end zone. Graham Gano missed the extra point, but the Panthers’ went back out front, 9-3. They extended their lead to 12-3 with a 33-yard field goal with a little over four minutes to go in the half. It wasn’t long before the Jets scored their first touchdown of the game. Josh McCown found Anderson deep down the right side of the field for a 33-yard touchdown, closing the gap to 2 with the extra point heading into halftime.

The defense continued their stellar play into the third quarter, forcing the Panthers to go three-and-out on their first two drives of the second half. They gave the offense the opportunity to take the lead, and that’s what the Jets did. McCown rolled out to the right and waited for Anderson to get open down the field for his second touchdown of the game. The play was reviewed to see if Anderson went out of bounds then came in, but he didn’t and the ruling was upheld. The extra point gave New York their first lead, 17-12. Even though it wasn’t the initial play, Anderson won’t complain about it.

“It was a scramble drill so I was trying to get in sync with [McCown], but he sent me up the sideline,” he said. “I had to keep my heels up because I was close (to the sideline). I was expecting him to throw a toe tap, but he directed me up the sideline so that was all on him, just trusting him, putting me in the best position to win.”

Carolina responded the following drive with Stewart running into the end zone for a touchdown. The Panthers tried to go for two, but failed to convert. They took the lead back, 18-17 before heading into the fourth quarter.

Any Jets fan would know throughout 2017, the fourth quarter hasn’t been kind to the team. Today’s game was no different as New York struggled to put the game away.

“Self-inflicted wounds,” head coach Todd Bowles said. “You can’t play three quarters of good and (then) give away two touchdowns. Obviously, we lose our patience. Everybody is trying to make a play individually and we don’t play team football in the fourth quarter. We gave away the football.”

Their next drive after the Panther’s touchdown went all the way to Carolina’s one-yard-line. New York thought they scored a touchdown when McCown threw to Austin Seferian-Jenkins in the end zone, but replay officials overruled the touchdown as an incomplete pass, forcing the Jets to settle for a field goal. Soon, mental errors plagued the Jets, as McCown fumbled the ball and Luke Kuechly returned it for a touchdown. Carolina converts the two-point conversion and retakes the lead, 26-20. Then the mental errors happened on special teams as Kaelin Clay returned a punt for a touchdown, pushing the Panthers further out front, 32-20. McCown redeemed himself on the Jets’ second-to-last drive of the game, finding Kearse in the end zone for a touchdown to bring New York within five.

The Jets held the Panthers to 3rd and 11 just before the two-minute warning, and forced Newton to overthrow his receiver, but a roughing-the-passer penalty on Mike Pennel on the play gave an extra set of downs to Carolina, sealing the victory for them, 35-27.

“It was roughing the passer,” Pennel said. “The refs called it a crucial time in the game. Can’t have it. It’s horrible but your job is to play the game.”

With the loss, the jets drop to 4-7 and host the Kansas City Chiefs next Sunday. Meanwhile, the Panthers improve to 8-3 and will visit the New Orleans Saints in a battle for the NFC South division. Here are some takeaways from the game.