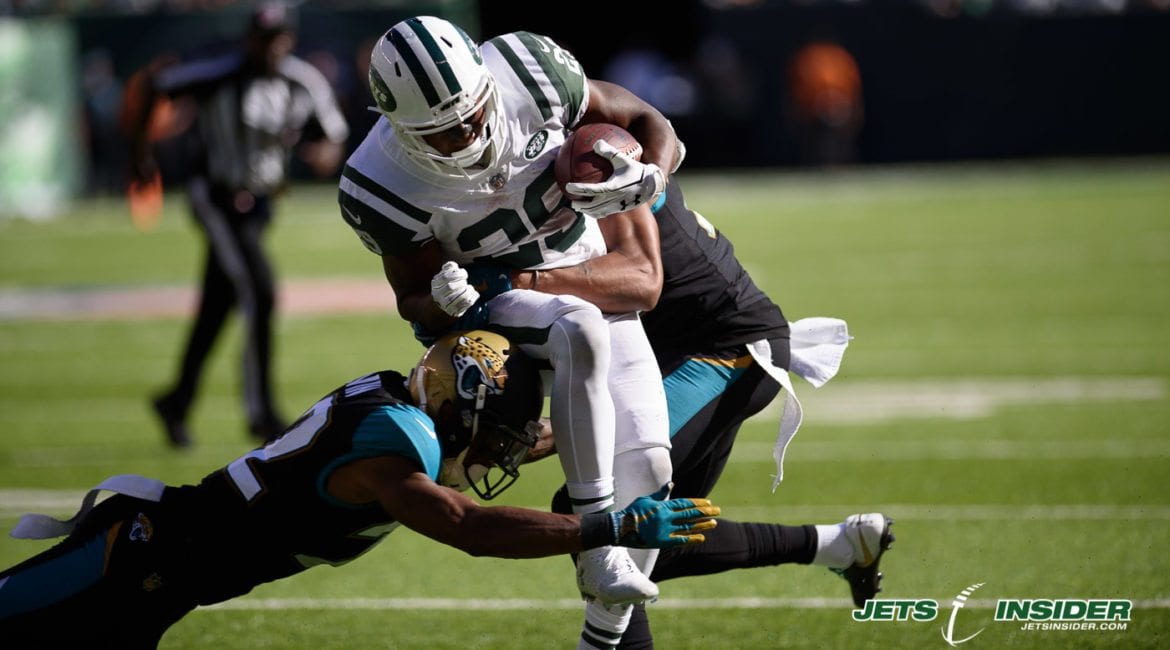 Florham Park, NJ – The New York Jets have been having their fair share of struggles in their last two games. The number one problem has been consistency. Each game the offense or defense had issues either getting a head start or finishing like a quality-team should. In week two, the defense struggled in the first half but came on strong in the second half. In week three that same defense was a wrecking ball in the first half and a lamb in the second half.  The same holds for the offense. Gang Green will be facing the Jacksonville Jaguars on Sunday, a lethal team that is among the super bowl favorites. Here is a look at some of the inconsistencies the Jets need to address if they want to make a game of it.

Against Miami, the line was driven back and as a result, it provided no running lanes for the running backs which accumulated a total of 41 yards on 17 attempts. Sam Darnold had the defense in his face all day and was also sacked three times in the game as well. Against Cleveland, the offensive line was better but not much. Darnold was sacked twice but was pressured each time he stepped back in the pocket. He was limited to check downs, outlet passes and screens because of the pressure from the Browns defensive line. The running game improved as Bilal Powell and Isaiah Crowell combined for 107 yards on 30 attempts with two touchdowns. The Jets can’t rely on a one-sided game whether passing or running itself to win games and need to have both facets working to compete.

On Sunday, the Jets face not only one of the best defensive lines in the NFL but one of the best defenses. Led by defensive end Calais Campbell, the Jaguars will be putting immense pressure on a rookie quarterback and this shaky offensive line. Darnold needs time to get down field and throw some longer passes. The running game will be critical and something the Jets should exploit since the Jaguars have given up a total of 346 in three games. If the running backs can step their game up and Darnold is given time, the Jets can put up points.

The Jets pass rush has been up and down this season. The Jets have managed to rack up eight sacks this season. Against Miami, the pass rush was effective to a limited degree. The defense gave up 20 points in the first half but none in the second.  Ryan Tannehill was able to rack up some rushing yardage on the ground by himself since the Jets had no plan of containment. Against Cleveland, Tyrod Taylor was ineffective because he was contained and pressured every snap. Once he got injured and replaced by Baker Mayfield, the Jets abandoned the blitz only to let Mayfield pick them apart, piece by piece.  Shame on the coaches for not having a game plan for the rookie or dialing up the pressure to frazzle the newbie into making mistakes. .

Blake Bortles is not the greatest quarterback in the NFL but he can run and beat you down field. The Jaguars offensive line is built on toughness and experience. They’ve only given up four sacks this season, the second lowest in the league. It will be difficult for the Jets to get to the quarterback this week and they will really need to rely on their outside linebackers or safeties for pressure.

The Jets offense has been a turnover machine so far this season. Sam Darnold has thrown five interceptions, including a picks six, and wide receiver Robby Anderson has fumbled twice already. Darnold threw two interceptions while trying to drive down the field in the final minutes of the game against Cleveland, which cemented a win for the Browns. Against Miami, he also had a costly interception in the end zone right after the Jet’s defense caused a turnover and the team was gaining momentum in the comeback against the Dolphins. If these interceptions don’t happen, the Jets would have been in position to win both games. Robby Anderson’s two fumbles have been costly as well. His fumble against Miami ended up with the Dolphins scoring a touchdown two plays later. Against Cleveland, Anderson’s fumble ended in a Brown’s field goal.

There is no question that the Jaguars defense is the main reason why they’ve won games this season, even limiting the Tennessee Titans to score nine points in their only loss. Myles Jack has the only interception for Jacksonville and Dante Fowler has the only forced fumble that was recovered. There’s a shortage of turnover in Jacksonville forced by the Jaguars and the Jets need to take advantage of that.

The Jets had opportunities to be 3-0 this season. The inconsistencies have really hurt them and they need to really find a rhythm in games and maintain it. Sunday will be a big test for this team and if their inconsistencies show up again this week, the Jets will have a long day ahead of them.