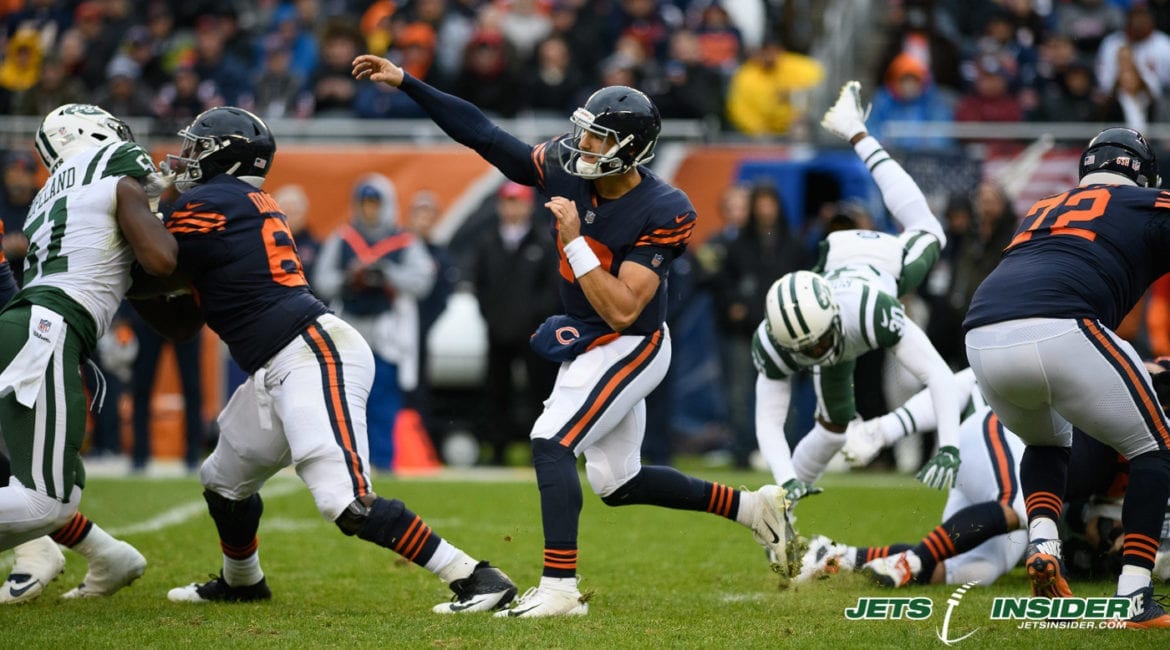 Chicago – A lethargic offensive performance led to the Jets failing their second consecutive game Sunday 24-10 to the Chicago Bears in Chicago.

Coming into the game the Jets were clearly undermanned, missing starting receivers Robby Anderson, Quincy Enunwa. It showed throughout the afternoon as New York was only able to generate 207 yards of total offense.

The Bears opened the scoring early in the first quarter when Tarik Cohen broke loose for a 70 yard touchdown. With the Jets blitzing heavy, Cohen had 50 plus yards of free space to work with after he caught the pass. The defensive blunder gave the Bears a 7-0 lead.

Throughout the first half the Jets failed to generate any substantial momentum from both the run and pass game. Isaiah Crowell was ineffective for most of the contest, rushing for 25 yards on 13 carries. Even with the Bears missing Khalil Mack, Sam Darnold still could not find a groove.

Darnold struggled all afternoon, completing 14/29 passes for 153 yards and one score.

The first answer for the Jets would come midway through the second quarter. On the longest possession of the season the Jets would come away with just a 42 yard Jason Myers field goal. In total they would go 14 plays, 51 yards and eating up 8:25 minutes to cut the lead to 7-3.

Heading into half the offense had 91 total yards, while scoring on only one of the six possessions. The Jets held the ball for five more minutes than Chicago while recording only 34 rushing yards.

In their second possession of the second half the Bears constructed a solid 55 yard, nine play drive that resulted in an Anthony Miller touchdown, putting them up 14-3. Cohen once again was the driving force, coming up with a big 21 yard gain to put the Bears within field goal range.

Once again the Jets followed up the touchdown with a third and out. They would go three and out five times on the afternoon. With the run game ineffective and Enunwa and Anderson absent, the Bears sat comfortably in the middle of the field near the line of scrimmage. The longest pass of the day for Darnold was a 29 yarder to Deontay Burnett.

In the fourth the Jets found a little bit of life. An eight play, 75 yard drive ended in a 16 yard touchdown for Chris Herndon. It was Herndon’s only catch of the game, cutting the Bears lead to 17-10. After a sloppy first three quarters the Jets found themselves back in the ball game.

That lasted only a few minutes. Trubisky looked solid again on this drive, hitting Miller and Jordan Howard multiple times for big yard gains. In the end Howard would punch it in from two yards out, putting the Bears back up 24-10 and putting the game ultimately out of reach. In total the Bears rushed for 179 yards with Trubisky accounting for 51 of that.

All in all the Jets looked outmatched straight from the start. The touchdown grab from Cohen showed the defensive inconsistencies that have hurt them all year. At times the defense looked lost and often was out of position.

On offense the Jets were plain and sluggish. Their top receiver was Burnett, who hauled in four catches for 61 yards. Even on a day where the Bears were without arguably the leagues best defensive player the Jets looked absymal trying to get anything going on offense.

The loss makes it two in a row for Gang Green and puts them at 3-5 for the season. They await their next challenge where they travel to Miami for a week eight divisional showdown.


Jets Draft Dt Kenrick Ellis From Hampton,Jets Offer Jeff Cumberland 1 32 Million Tender,Jets Pre Draft Plus Revis And Tebow Presser,Positive Remarks,Three Stars And Three Disappointments Of Training Camp,Meet The Prospects Cameron Heyward,Woody As Uk Ambassador Almost Official,Calvin Ahead Of Pace Revis Not,Its Put Up Or Shut Up For Jets,Five Games To Focus On For 2012