Jets try to avoid barking up the wrong Crabtree 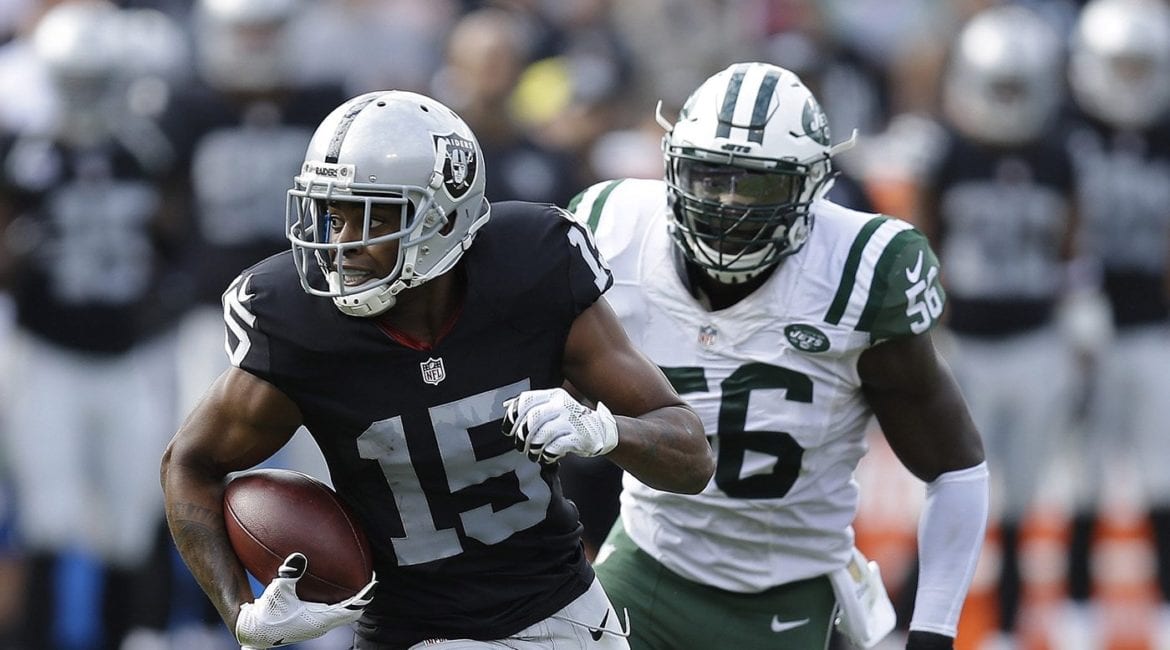 These are your father’s Oakland Raiders – a potent offense with a dangerous defense. Derek Carr is making a name for himself, the same way Kenny Stabler and Rich Gannon did. While Carr has a long way to go to reach their elite level, he does share a similarity with them. Like Stabler and Gannon, Carr has benefitted tremendously from the supporting cast in his offense.

It’s not just the return of Marshawn Lynch making headlines in Oakland. It’s not just Amari Cooper’s size, strength and ability. Those two players are gifted, yes. But, one wide receiver flies under the radar each year and still has a sizeable impact despite an average frame.

The story of Michael Crabtree is an interesting one. He’s a player who was drafted tenth overall in the 2009 NFL Draft by the San Francisco 49ers but failed to put up head-turning numbers in his first three seasons. Normally, a Top-10 pick in any draft is expected to have an immediate impact, especially after holding out for some time in his rookie season.

Crabtree was written off.

In 2012, there was a flash in the pan. Crabtree had 85 receptions for 1,105 yards and nine touchdowns. He followed that with two subpar seasons with one and four touchdowns respectively. Because of the underwhelming campaigns, Crabtree hit the open market because inconsistency defined his game.

The wideout spent parts of six seasons with the 49ers and had moments that would make an average fan think: “Wow, he has the tools.” However, the hard work did not translate on a weekly basis. In the fantasy football world, Crabtree was nothing more than a FLEX/WR3 stream option. Occasionally, the receiver broke out. But, the games when Crabtree was a virtual nonfactor hurt his market in free agency.

Oakland took a flier on him in 2015 and signed him to a simple one-year deal with only $1.3 million in guaranteed money. Combined with Carr, Crabtree broke out to the tune of 85 receptions for 922 yards and nine touchdowns. He followed that with 89 catches for 1,003 yards and eight touchdowns last year. Teamed up with a legit quarterback, Crabtree blossomed into the receiver he was meant to be.

“He is a football player. Man, he is just … a football … player,” general manager Reggie McKenzie told The Athletic. “He makes plays and he knows how to do it. He’s a natural. I love Crab … I think with him and Marshawn (Lynch); it comes down to the environment.

“First, the locker room. Then the coaches getting their hands on them and making them feel like they are a part of something. Then the organization treating them well. It all goes hand in hand. It’s cool.”

Crabtree is 30 years old. Who would have thought? He’s been in the league since 2009. That’s the same year the Rex Ryan-led Jets marched to their first of two consecutive AFC title games. Feel old yet? However, age is just a number for this receiver. He is proving, game in and game out, that cornerbacks can’t sleep on Michael Crabtree. If he gets open, he’ll hurt you.

“Crab was the complete opposite of what was said about him in San Francisco,” McKenzie said.

What was said about him? We may never know. But, the Jets should understand this on Sunday and not take him lightly. He’ll be a threat lined up on the outside. Crabtree has some of the best hands in the NFL, according to former coach Jim Harbaugh.

On Opening Day, Crabtree registered six catches for 83 yards against the Titans. Tennessee is projected to be one of the better teams in the AFC this season. If the math is right, the possibilities seem endless for Crabtree against a young Jets secondary.

Buster Skrine or Morris Claiborne will have their hands full with Cooper. The other gets the joy of facing Crabtree. While Cooper is still young and effective, Crabtree seems to be getting better with age.

Around The Locker Room For Dolphins Part Ii,Jets Positional Preview Offensive Line,Coachs Decision Wilkerson Wont Play,Time Is Now For Sanchez And The Jets,Jets Have Offensive Weapons Its Time To Use Them,Three Stars And Three Disappointments Of Training Camp,Its Already Toxic Make The Change Now,Vacation Time Is Over Jets Get Back To Work,Fight Training Camp Has Officially Begun,Green And White Breakdown Jets Bills