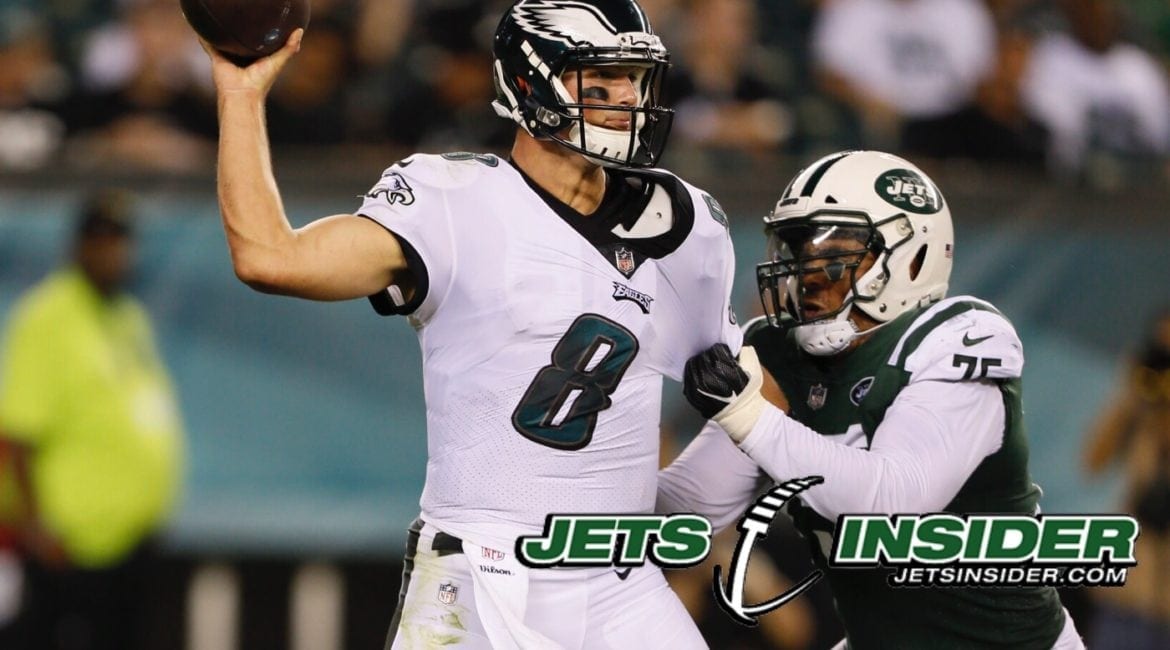 Philadelphia, PA – With the Jets just 11 days away from their season opener in Detroit, the fourth preseason game was a final test for position players battling for starting roles and roster spots. Prior to the game Head Coach Todd Bowles stressed the outside linebacker, safety, and tight end positions the most when discussing spots that were still up for grab. As expected, almost all of the starting offensive and defensive players did not play in this one. Rookie quarterback Sam Darnold did not play a single snap in the ball game. This comes a day after his competitor, Teddy Bridgewater was traded to the New Orleans Saints, ultimately signaling Darnold as the week one starter.

Josh McCown got the starting nod and wound up playing four sets. He threw 3-for-9 for 26 yards. On offense the wide receivers continued to battle for final spots with Jermaine Kearse, Robby Anderson, Quincy Enunwa and Terrelle Pryor rounding off the starters. Charone Peake, Chad Hansen, Tre McBride, Charles Johnson, and ArDarius Stewart would all compete for backup spots in this one. None of them particularly shined with John Wolford at quarterback. Peake nabbed three catches, McBride one, and Hansen one.

As for the tight ends the talent level has been well documented all preseason. Eric Tomlinson’s ability as a blocker makes him a lock to make the roster but the rest behind him is up in the air. Rookie fourth-round pick Chris Herndon has shown flashes during training camp and is well liked by management, so it would be a shock to see him get cut. Behind those two Jordan Leggett, Neal Sterling and Clive Walford were all competing for a spot as well. While it is unclear whether the Jets take three or four tight ends, the truth is they are all talented enough to get picked up by another team if they are cut. Walford stood out the most during the game. He reeled in three grabs for 40 yards, including a nice 20 yard catch up the middle with contact. Following that play he went to the sideline limping, but continued to ride the bike the rest of the game. With seven seconds left in the fourth quarter Jordan Leggett went down after taking a hit to the mid section. He walked off on his own power.

Among the crowded secondary, a few players made their mark in the final game of preseason. Cornerback Juston Burris picked off former Jets quarterback Christian Hackenberg midway through the second quarter. He made a great read on a slant route and stepped in front of it for his first interception of the preseason. Safety J.J. Wilcox got in the action as well when he picked off Hackenberg on an overthrow late in the second quarter, setting the Jets up in redzone territory. He later victimized Hackenberg again in the third quarter, forcing a fumble that ended up in the hands of the Jets. Derrick Jones added another interception to the list in the fourth quarter, picking off Joe Callahan in the endzone.

With Cairo Santos cut last week, the Jets brought in Jason Myers to compete with Taylor Bertolet for the starting kicker job. Myers connected on a 58 yard field goal with plenty of leg left early in the first quarter. That impressive kick may have been the deciding factor if Myers presumably ends up winning the starting job.

As for the outside linebackers, searching for a pulse of new pass rush has been a struggle in training camp. The biggest story has been whether the Jets will keep fourth year player Lorenzo Mauldin. After tonight’s game it seems more likely than not that he will not be on the opening day roster. His snaps were limited, and so was his impact during the game, recording just one tackle.

The return of Hackenberg against his old team was a fun story coming into the final preseason game. He looked very Christian Hackenberg to say the least, throwing for 69 yards, two interceptions and one lost fumble. A few scrambles helped him move the ball but other than that he looked as lost as he did when he wore a Jets uniform.

Throughout the ball game there was not much offense, which is to be expected in a fourth preseason game. The Jets had 186 total yards on 9 points. They led 3-0 at half on the lone field goal from Myers.

In the second half the Eagles tied it up early in the third quarter with a Jake Elliot 55 yard field goal. The Jets responded with a 43 yard field goal from Myers to lead 6-3 going into the fourth. The Jets would add another field goal but it would not be enough. A Matt Jones catching touchdown with 18 seconds left gave the Eagles a 10-9 lead. That touchdown was the first touchdown given up by the defense all preseason. Now Gang Green turns their attention to the regular season, where they await a week one matchup with the Detroit Lions on September 11th.