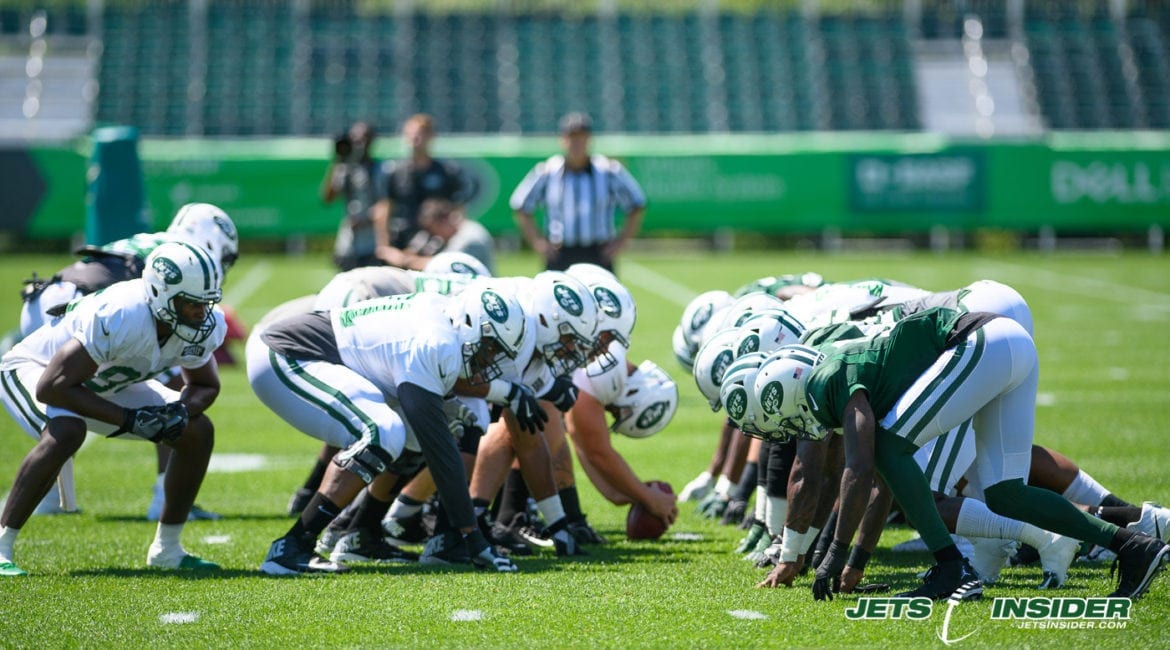 Richmond, VA– The Jets were hosted by Washington today for the first of three joint practices. Preseason is a grueling process, and sometimes tensions can boil over. Today was one of those days.

There were several large brawls today and many smaller disagreements. The first fight came during one-on-one drills between the Jets defensive line and the Washington offensive line. Brandon Copeland, who’s been working hard to prove he’s worthy to make this roster, and has played well so far and had a strong game against the Falcons, was working with the first-team over Josh Martin. He got beat cleanly in the drill by back-up left tackle Ty Nsheke, who was shoved by Copeland after the whistle. Nsheke slapped his chest and two charged each other. Before anything more than shoving could ensue, both teams lineman came in and broke them up.

The second fight was much more violent and inclusive, it happened after a late hit on right tackle Morgan Moses, who was taken to the locker room afterwards. The Washington offensive line came to the defense of Moses, which led to a sideline brawl that made its way into the fan section. Not two minutes later another fight broke out on the other sideline, this one a little smaller and quicker to break-up, and it appeared to be a follow-up to the first fight.

On the other side of the field, the two teams coexisted mostly peacefully, although Josh Norman and Terrelle Pryor went at it for a second with Norman pulling at Pryor’s jersey, but the two walked back to the line of scrimmage with their arms over each others shoulders. Later on during team drills, Antonio Garcia knocked over Washington defensive end Dante Sawyer well after the pass was thrown in what was a clear cheap shot. Sawyer stood up, said a couple words to Garcia, and Garcia squared up and put up his fists. Jets lineman were quick to grab him, and he returned to the sideline to cool off.

All in all there were two brawls that could be called “bench-clearing”, and five or six smaller disagreements that were on the verge of being physical. Not what you want out of day one.

You can watch footage of the fights here.

Despite the Copeland altercation, the Jets looked very strong in the one-on-one drills. Trent Williams is an absolute beast, and bottled up most of the Jets he went against, including Josh Martin three times.

When it came time to for Leonard Williams and Trent Williams to go at it for a little best-on-best action, the crowd got into it. Leonard burnt Trent for what would have been an easy sack then turned around to the largely Washington crowd and cupped his hand around his head as if to say “I can’t hear you!” which received a cacophony of boos. The next time the two were slotted to face each other, the crowd became involved again. This time, Trent stymied Leonard and the Washington fans let loose a big cheer as the two big men slapped each others helmets in respect. Brandon Scherff could not come close to handling Leonard Williams, and was beat twice soundly.

Frankie Luvu showed off his speed, recording two would be sacks on the outside on only two attempts, and Nathan Shepherd showed off his strength, using his hands like clubs and slapping away any limb that tried to block him and got a sack on Brandon Scherff.

Quincy Enunwa, who sat out of Friday’s game against the Falcons and the last couple days of practice leading up to the game, was suited up and looked ready to go. He made a couple tough grabs look easy during route drills, and then was back to sideline. He looks more than ready to go, but the team is taking his return very slow. Jordan Leggett missed the game as well, but came out today ready to work. In individual drills, Leggett worked hard with Eric Tomlinson to improve his blocking. For about 15 minutes the two did almost non-stop repetitions, only taking a break to hear instruction from tight ends coach Jimmie Johnson.

Ben Ijalana limped off the field but came back to watch the rest of practice without his pads. Buster Skrine and Isaiah Crowell, who were injured Friday, were not in attendance. Neither was Chris Herndon, who was banged up last week during practice.