One day following the Jets’ season-ending loss to the Dolphins, Eric Mangini took the fall for the team’s stunning collapse.

But Mangini has found his next opportunity, as the Cleveland Browns have agreed to hire Mangini as their new head coach. Mangini agreed to a four-year contract ESPN is reporting, and he will be introduced at a news conference today.

Mangini replaces Romeo Crennel, after amassing a 24-40 record over four seasons in Cleveland. The Browns entered 2008 as playoff hopefuls after finishing 10-6 in 2007, but they finished 4-12 last season and did not score an offensive touchdown in their last six games.

Mangini began his career in football in 1994 as a ball boy with the Browns and later served as an intern in the team’s public relations office.

Mangini will begin to assemble his coaching staff and ESPN is reporting that he could target Jets quarterbacks coach Brian Daboll as his offensive coordinator and Raiders defensive coordinator Rob Ryan for the same position. Both are in the final year of contracts with their respective teams.

General manager Phil Savage was fired along with Crennel and the Browns search for his replacement continues. Patriots director of player personnel Scott Pioli was interviewed by the team, but his relationship with Mangini eroded following “Spygate” last season. The Browns plan to interview Eagles personal director Tom Heckert and Ravens personal director George Kokinis.

In three seasons with the Jets, Mangini went 23-25 and led the team to a surprising wild card berth in 2006. 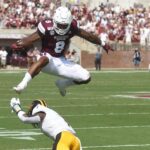