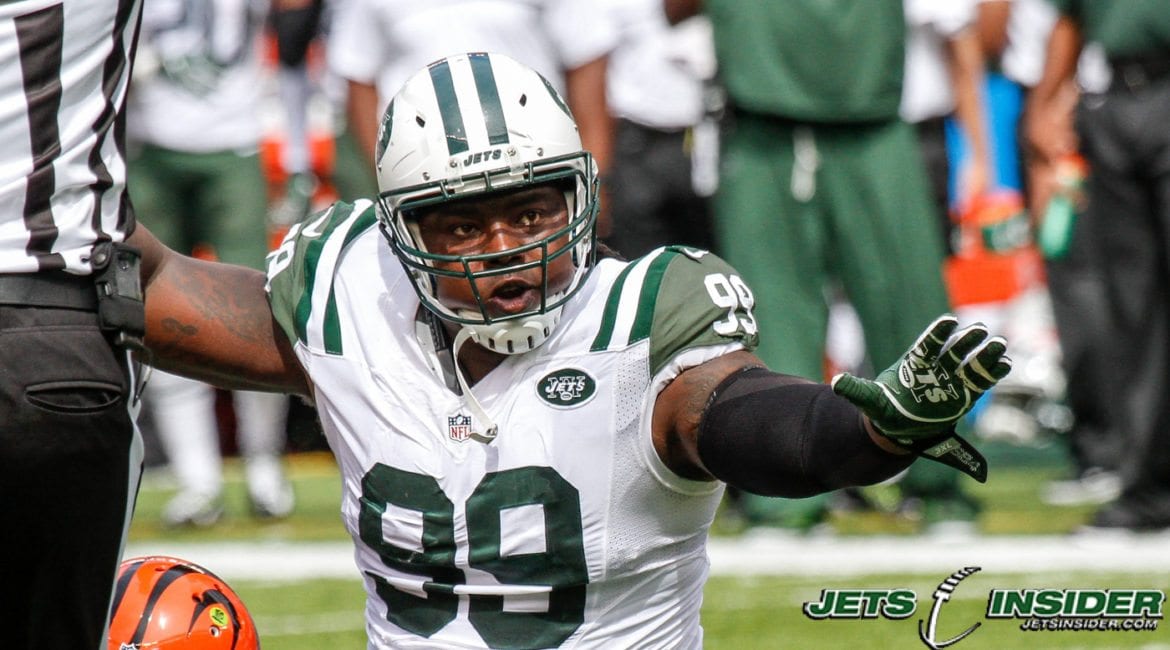 Florham Park, NJ – Steve McLendon doesn’t like to focus on the past, regardless of how successful it was. In his mind, you live, learn and move on. There is no time to feel sorry for yourself if something goes wrong or pat yourself on the back when something good happens. According to the Jets nose tackle, if you do that, you’ll lose a focus and won’t play smart.

“We’re moving on,” McLendon said when asked about his stout rushing unit last Sunday. “We are focused on this week – playing the Jacksonville Jaguars, stopping their run, and at the end of the day we’re going to come out victorious.”

Smart move, Steve. The task that awaits: an electric rookie running back in Leonard Fournette and veteran power back Chris Ivory. For McLendon, it’s just another day at the office. The nose tackle sees this as another opportunity to show the league how robust the Jets rushing defense can be in 2017.

“It’s just another group of NFL running backs,” said McLendon. “The Oakland Raiders had some. Miami had them. That’s the NFL now – have more than one running back that can carry the load. It’s just another task and another challenge for us. We’ve got to go out there and focus.”

While Fournette has not lit up the box score through three weeks, he and Ivory are doing the little things to move Jacksonville’s offense in the right direction. It isn’t a glamorous job but getting necessary yards on first down – for example – helps a unit make potential third downs easier to convert. Besides, with this much talent, it is only a matter of time Fournette finds open space into a secondary.

For Fournette, he has to realize statistics will eventually come his way. While he patiently waits, the team comes first. That is something McLendon believes very strongly in.

“It’s all about the team. It’s not about the stats,” McLendon said. “The stats are going to come if you just continue to do the little things that you’re coached to do each and every day.

“There are three things we are coached to do,” he continued. “Play fast, play hard and play smart. Those are the things [head coach Todd Bowles] ask for. Those are high standards that we are coached to do. In this type of scheme, you’re not going to make a lot of plays but then you’ve got to make the plays when they come to you.”

Entering Week Four, the Jets are tied for 27th in the league in sacks recorded with five. Only the Miami Dolphins, San Francisco 49ers and Tampa Bay Buccaneers have fewer. What was once considered a strength of the team, is now a major concern. Muhammad Wilkerson is not putting up the same numbers, especially in the sacks category, he once had and Leonard Williams and McLendon are also held sackless.

Time to panic? McLendon says no. His goal is to make the Jaguars one-dimensional. Then, the rest will come their way.

“Once you get a team into something one-dimensional, the sacks will come,” McLendon said. “Other big plays will come. You got to be patient with the game, understand that this game will be a long season and don’t get caught up in the sacks and stats because there going to come.

The defensive line hasn’t put up the numbers it once produced and Wilkerson, in particular, isn’t going to replicate the 12-sack season he put up in 2015, especially with a bum shoulder. But, the Jets will find their way and open opportunities for the rest of the unit if the defensive line focuses on their alignment, assignment and technique.

According to McLendon, that’s priority number one.

“If we do that, put some pressure in [Blake Bortles’] face, we’ll be alright,” the lineman said. “Just have to push the pocket and do the necessary things that our coaches coach us to do. We’ll be alright.”