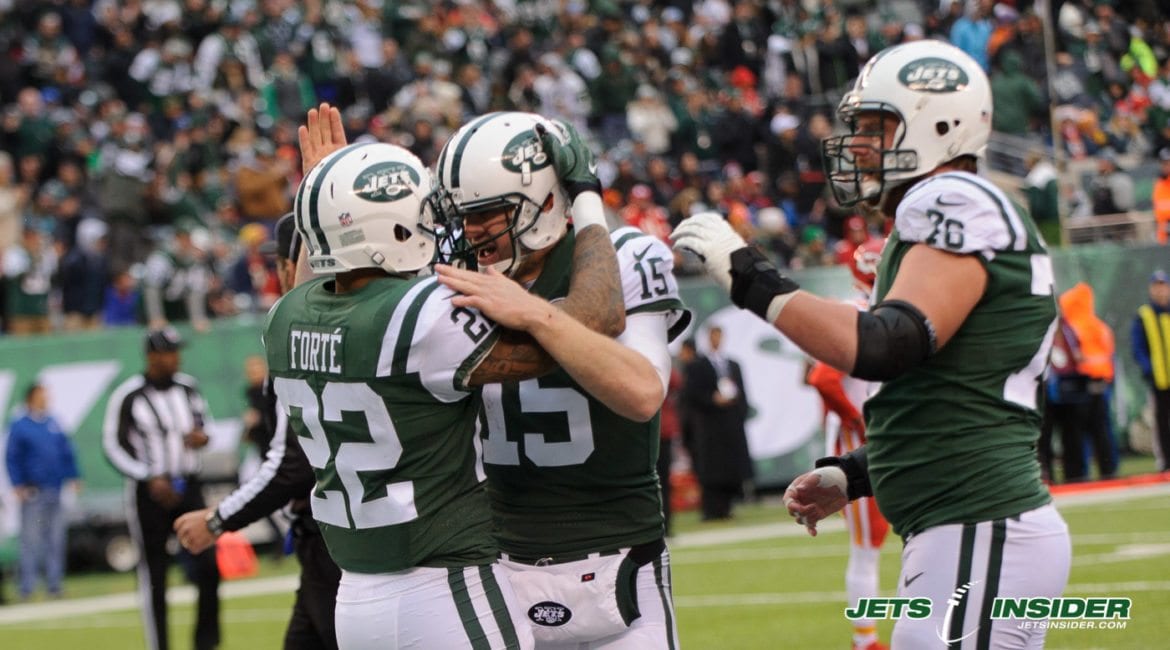 Florham Park, NJ – Behind head coach Todd Bowles is offensive coordinator John Morton and defensive coordinator Kacy Rodgers. The coordinators don’t receive much attention, but they’re vital to putting together an offensive and defensive game plan against upcoming opponents. We look back at last Sunday’s matchup against the Kansas City Chiefs and grade Morton and Rodgers based on how the offense and defense performed in the game. For Morton, we’re grading him based on how many points the Jets scored and how the Jets did in the rushing and passing game. For Rodgers, we’re evaluating him based on how many points the other team score and how the Jets pass and rush defense did.

Strength: Pass Offense – Josh McCown winning the AFC Offensive Player of the Week honor for Week 12 speaks volume as to how well the Jets offensive game plan through the air was executed. McCown went 26/36 for 331 yards and a touchdown. Of those 331 yards, 264 yards were gained by Robby Anderson and Jermaine Kearse. If you average that out, Anderson and Kearse would 132 yards each, which is a solid day for the passing offense to have two receivers over 100 yards receiving. In addition, there were no interceptions thrown by McCown or sacks on him. All-around, the pass offense played well.

Weakness: Rush Offense – Matt Forte, Bilal Powell, and Elijah McGuire didn’t have a bad day collectively against the Chiefs, but compared to the pass, the individual performance was lackluster. This is the fault of the system. Fans know that all three can have a huge impact in the offense alone, but when they’re forced to share playing time amongst themselves, it limits their productivity. Forte had 58 yards on 15 carries, Powell had 48 yards and a touchdown on 18 carries, and McGuire had 20 yards on five carries. Collectively, they rushed for over 100 yards, but individually, neither running back stood out. It also didn’t help them that McCown rushed for two touchdowns.

Focus for Denver: Broncos’ Secondary – The Jets have gone up against teams with a top-level safety or cornerback, but they never faced a defense like the Broncos, which has multiple defensive weapons. Not only is Von Miller a threat to pressure the quarterback, but the coverage of Aqib Talib, Chris Harris Jr., and Darian Stewart is extraordinary. Harris and Talib provide smothering coverage that forces the QB to hesitate before throwing, giving Miller time to get to him. Look for Talib and Harris to create problems for McCown, Kearse and Anderson.

Overall Grade: A – The passing game is clicking right now. The rushing game is collectively doing their jobs, shrinking the field early on in drives. The only thing keeping Morton from an A+ is individual performances at half back. We know what Forte, Powell, and McGuire can do and with the Jets going up against a defense like the Broncos that can blanket receivers, their impact will determine if the Jets improve to 6-7 or fall to 5-8.

Strength: Front Seven – The early-season struggles that plagued the Jets’ defensive linemen and linebackers seem to be a thing of the past. Muhammad Wilkerson, Leonard Williams and Mike Pennel combined for nine tackles, half a sack for both Williams and Wilkerson. Demario Davis, Julian Stanford, Josh Martin and Jordan Jenkins combined for 14 tackles and Jenkins had a sack against Alex Smith. The only mistake by the front seven was allowing Smith to break out for a 70-yard rush, but other than that, they did their jobs by limiting Kareem Hunt’s productivity.

Weakness: Secondary – This was a tougher pill to swallow for Rodgers. The Chiefs’ offense exploded through the air, with Smith throwing for 366 yards and four touchdowns and Travis Kelce and Tyreek Hill burning the secondary downfield for a combined 294 yards.

Focus for Denver: “Their personnel.” – “The thing that’s stood out, when you watch those two receivers out there with (Demaryius) Thomas and (Emmanuel) Sanders, this team is really close,” Rodgers said. “Then a three-headed monster at the (running) backs, because they use those guys all over the place. That’s the thing to really look at them. They’re an extremely talented team.”

Overall Grade: B- Giving the defense credit where credit is due, they had to keep the Chiefs from tying the game in the last two minutes. The most stressful part of any NFL is the last two minutes in a game, and the Jets’ defense held their own. Still, there’s no excuse for allowing a team to score 31 points in a game. The Jets defense will have their hands full winning the game against Denver if they can’t contain both Thomas and Sanders.