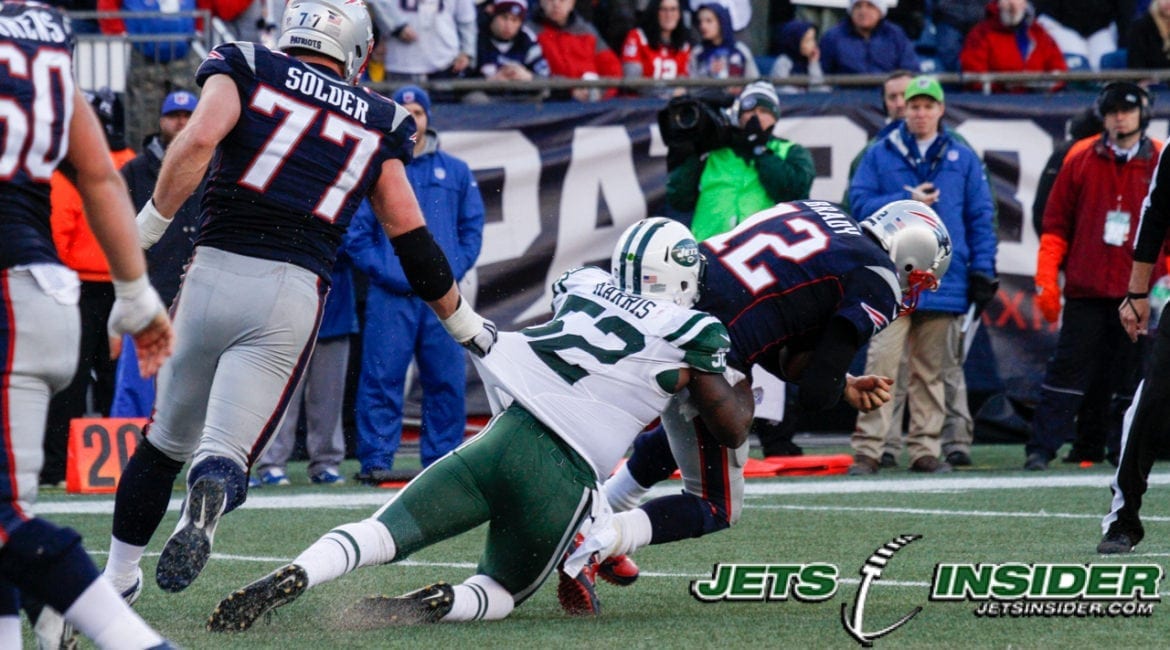 The New York Jets played a memorable night in Foxboro in the 2010 playoffs.

It’s time for this week’s look back, New York Jets fans. If you would like to read the first two installments of this series, check out the Bills look back and the Browns look back.

With all of the worry and the anger that has come over the last couple of weeks thanks to all of the injuries, I thought this week we bring it back to some pure joy. So, with it being Patriots week, we go back to the 2010 divisional playoffs.

I think you all know where this is going.

The date is January 16, 2011. The Jets had come off of beating the Colts in the Wild Card game on a late Nick Folk field goal. They headed up to Foxboro to face the vaunted Patriots. Rex Ryan and his bunch were facing an uphill battle. I mean, nobody beats the Patriots on their home turf in the playoffs. Right? Right?

Leading up to the game, coach Ryan brought in Dennis Byrd to motivate the team. The team brought his jersey out to midfield for the coin toss to let some of that mojo spread over the team on this night. They knew they were going to need it to have a chance. As much as we all dislike the Patriots, part of the reason is that they win all the time, and all eyes were on the Jets, coming off of an AFC title game the previous year to try and get back there again.

The Jets punted after only five plays on the first drive. On the next drive, we learned how it just might be a different night. The Patriots drove inside the Jets 30, and then…

Brady throwing an interception in the playoffs? That never happens. Is something in the water on this night? It didn’t turn into points, ask Nick Folk missed a 30 yard field goal, but the night was far from over yet.

On the ensuing drive, the Patriots went up 3-0 on a Shayne Graham 34 yard field goal. Could this be the beginning of the end? Are the Patriots about to take this game over?

It turns out that this Jets team was not about to let that happen. They went ahead in the second quarter when a five play, 54 yard drive ended with a Mark Sanchez seven yard touchdown pass to Hall of Fame running back LaDainian Tomlinson. Before the end of the half the Jets scored again on a four play drive that ended with Sanchez’s second touchdown pass, this time 15 yards to Braylon Edwards. The Jets led 14-3 at halftime.

In the third quarter, Brady and the Patriots were able to close the gap to within three. Tom led an eight play, 85 yard drive that ended in a touchdown pass from Brady to Alge Crumpler two yards out. The two point conversion brought New England to within three at 14-11, but that was as close as they got the rest of the night.

On the very next drive was a pass from Sanchez to Santonio Holmes. It needs no introduction, just watch it and smile:

This put the Jets up by ten early in the fourth. A second Graham field goal closed the gap to seven, but it was all over when Shonn Greene ran it in from 16 yards out to extend the lead to 28-14. Remember when Rex Ryan rumbled down the field to celebrate with Greene? Him running down the field was a bit hard to watch, but nobody cared as the Jets were about to eliminate the Patriots.

A late Deion Branch touchdown reception made it close, but it was not enough as the Jets set a date with Pittsburgh in the title game. The Bart Scott interview came up right after, and that lives on, as does the memory of a great win.

Smile Jets fans. We will be OK.

Green And White Practicescrimmage Three Observations,Training Camp Day 15 Update,Sounding Off Defense Edition,New Gm John Idzik Focused On Reality Not Perception,Cromartie Landry Named To Afc Pro Bowl,Jets Full Schedule Leaked,Friday Notes From The Complex Get Back,Six Million Ways And One Ways To Lose,Choosing Between Jets Either Or Scenarios At No 11,Schotty Out As Oc Dynamic Duo Coming To Replace Him