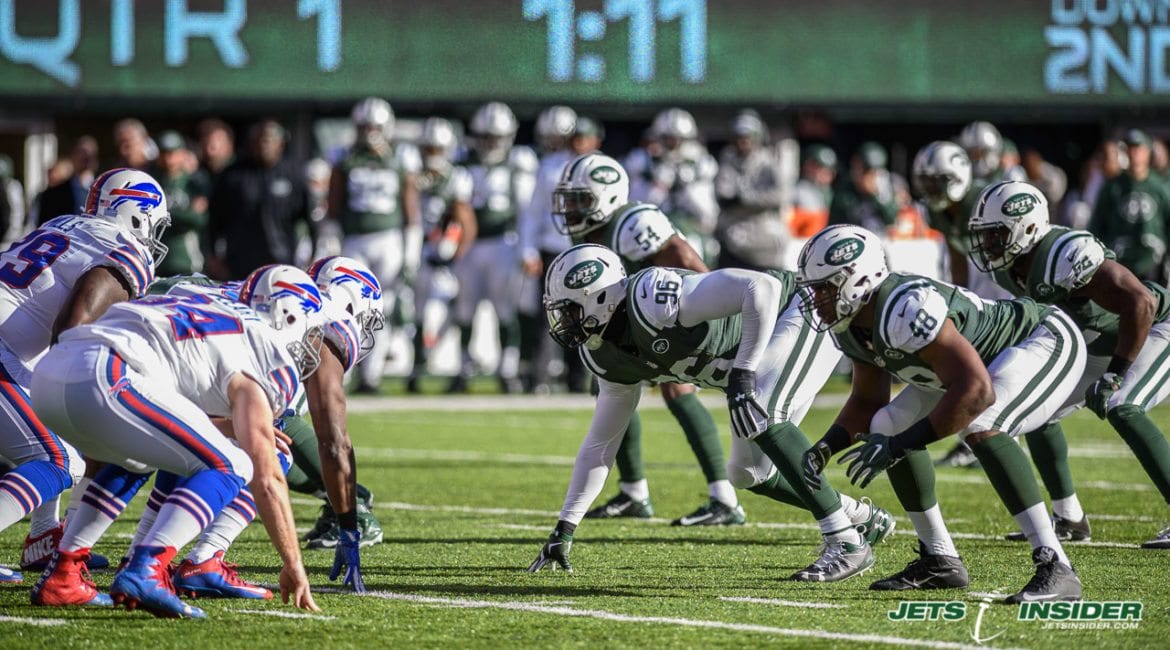 Now that Thursday’s matchup between the New England Patriots and Kansas City Chiefs ended, fans can look forward to Sunday and enjoy lots of NFL games. One of those games is New York Jets against the Buffalo Bills at New Era Field in Orchard Park, NY.

When the Bills and Jets face each other on Sunday, it’ll mark the 113th time the teams played against each other. Buffalo and New York first met on September 11th, 1960, which the Jets won 27-3. Since then, the Bills lead the regular season match ups against the Jets 59-53. The longest winning streak for the Bills was 10 from 1988 to 1992. For the Jets, their longest winning streak against the Bills was seven between 1984 and 1987. Last season, it was the Jets sweeping the season series with a 37-31 overtime victory at New Era Field and a 30-10 win on the last game of the season at Metlife Stadium.

Three Keys to the Game

JetsInsider writer Nick Faria wrote on Wednesday that newly-acquired wide receivers Jermaine Kearse and Jeremy Kerley can be a 1-2 punch for the Jets. He hit on a good point. Kearse and Kerley have the most experience of the Jets receiving core. Kerley was drafted by the Jets in the fifth round of the 2011 NFL Draft. He was a solid slot receiver, but never became that reliable target. He started last season  with the Detroit Lions before getting traded to the San Francisco 49ers. Kerley recorded one of his statistically-best season with the 49ers, tallying 667 yards and three touchdowns on 64 receptions.

As for Kearse, he not only brings experience to the Jets, but also brings championship-winning experience. He won Super Bowl 48 with the Seattle Seahawks at Metlife Stadium. Kearse’s career highlight came the following NFC Championship game. In an overtime thriller between the Seahawks and Green Bay Packers, Russell Wilson found Kearse in the end zone to send Seattle to Super Bowl 49. So Kearse has the ability to deliver in clutch situations. How much of an impact Kearse and Kerley make in the game will decide the winner.

There’s no doubt that LeSean McCoy is one of the best running backs in the NFL. He was the rushing leader in 2013, and the Bills have topped the NFL in several rushing categories since McCoy joined the team in 2015. When McCoy ran for more than 100 yards in a game, the team is guaranteed to win. But last year’s Jets wasn’t one of those teams. In fact, McCoy only totaled 66 yards in the two match ups against the Jets, and New York won. So containing McCoy is a top priority.

In addition, the Jets defense has to keep their eyes on Tyrod Taylor. He’s a dual-threat quarterback that can throw deep down the field. But if Taylor can’t find anyone, he has the speed to run out of the pocket and get some yards on the ground. Taylor doesn’t have Sammy Watkins anymore, and Jordan Matthews isn’t that deep-threat receiver, so expect a lot more short-to-medium passes from him this year. However, if the Jets can keep Taylor within the pocket and put great pressure on him, New York has a great chance to win on Sunday.

It’s very rare rookies come into the NFL and have an immediate impact on the team. It’s even rarer that those rookies come in with leadership qualities, but that’s what Maye and Adams have been doing. Throughout the off-season and training camp, there’s been nothing but praise from players and coaches regarding Maye and Adams. Great work ethic, great communication, and great leadership were just a few common comments when the topic came up.

However, the first game of an NFL season has a different feel to it, and fans can expect Adams and Maye to be nervous. In the second preseason game against the Detroit Lions, Adams looked like a rookie as he missed a couple tackles. It will be interesting to see how Adams and Maye play against the Bills. Will they play aggressively and put some pressure on Tyrod Taylor or will they play conservatively in the defensive backfield and keep Taylor from throwing it deep? We’ll find out come Sunday, and how the play will set the tone for the defense.