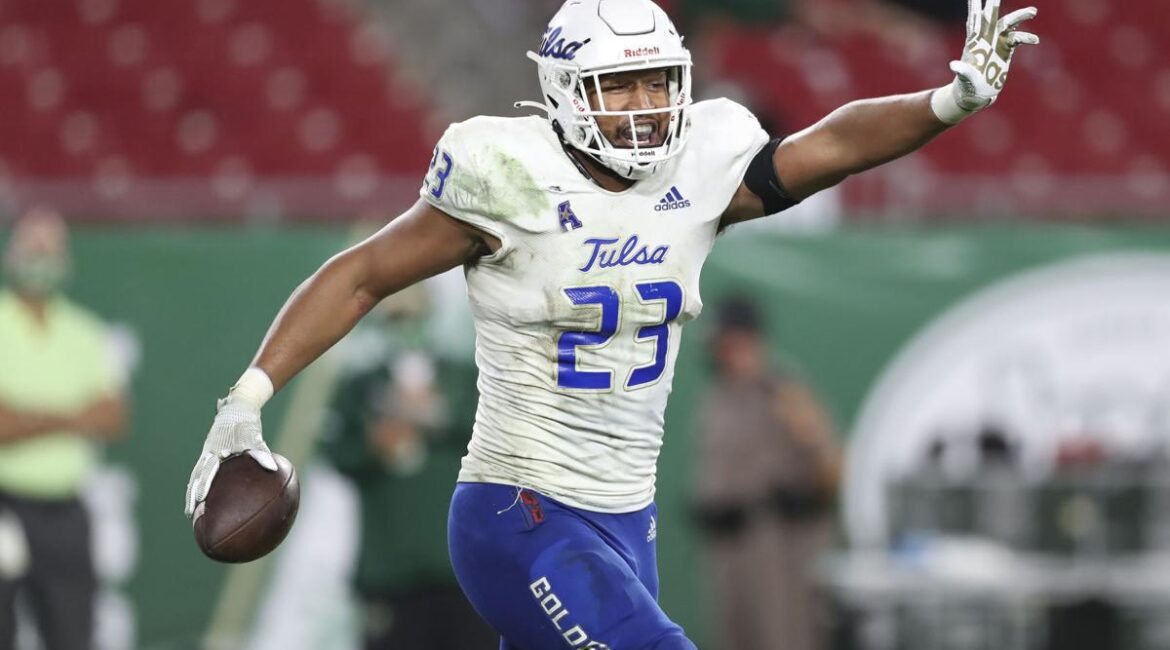 Well it’s Draft Day, Kevin Costner be praised. Last year the Jets had the luxury of having their needs line up perfectly with the various strengths of the draft (offensive tackle in the top ten, wide receiver in the second round). This year, they aren’t so lucky. The top edge rushers are projected to go before the Jets pick. As are the top corners. Ditto for most of the offensive lineman. Honestly, unless the Jets move 23rd pick, it’s unlikely that’d be able to address their biggest needs without reaching…except linebacker, I guess. Can you imagine if the Jets took a linebacker in the first round? The fanbase would riot. But that would never happen…right? Right??? Don’t be so sure. The Jets are a lot likelier to take a linebacker early in the 2021 draft than you think, and honestly? That’s not a bad thing. I’ll explain.

As the defensive coordinator of the San Francisco 49ers, Robert Saleh was applauded for his ability to produce a good defense despite losing a ton of starters to injuries. A huge part of his success? Fred Warner. One of the best linebackers in the NFL, Warner’s prowess and fluidity in coverage allowed Saleh to deemphasize his depleted cornerback room and make their job easier. Linebacker is a hugely important position in this defense; which is partially why the Jets tried to swing for the fences with Jarrad Davis. But the job isn’t done. CJ Mosley hasn’t played football in almost two full years since being paid the GDP of a small country. The aforementioned Jarrad Davis is poo poo. Blake Cashman hasn’t been able to stay on the field. The Jets have nothing but (to put it charitably) question marks at what we know is a very important position in this defense scheme. It’s not a need anyone wants to talk about…fans don’t want to hear it, but the Jets desperately need a linebacker…preferably a good one. So what does this linebacker class look like and where are they going to be picked? Lets dig in.

The best way I could describe Zaven Collins is: imagine if someone found a 300lb silverback gorilla and gave it a jetpack. He is a monster truck with a Ferrari engine; a 6’4” 260 pound thoroughbred that can gallop across the field with astounding speed. So what is he good at? Honestly, I’ve watched just about every game and I’ve yet to find anything he can’t do. Is he strong enough to take on linemen at the point of attack?

Check. Is he fluid in coverage?

Yeah, I’d say so. Watch the much smaller QB disappear off the screen as Collins rumbles past him for a game winning pick six. He’s also got one of the most important traits any linebacker can have: intelligence. Collins often seems to know where the ball is going before anyone else. He’s a football junkie who evidently puts a lot of time and effort into studying opposing offenses. When you combine that with his insane speed, the results can be devastating. He practically teleports to the ball.

He’s also special as a blitzer too. And not just in the way that linebackers typically are; sure, he can come screaming through the B Gap on a designed blitz like Donte Hightower. But I’ve actually seen him dip and rip around the corner against offensive tackles like a full blown edge rusher! It’s unbelievable.

I’ve heard some people refer to Collins as being scheme specific, but honestly if your scheme can’t make room for a Beast Titan touched by the hand of God, then your scheme is trash. Zaven Collins is probably my favorite player in the draft to watch and if he’s on the board at #23, I hope the Jets take him. That’s right, I said it. I don’t care about your dumb list of team needs. Would you pass on Brian Urlacher??? You would? Oh. Well…would you pass on Brian Urlacher if he wasn’t a psychotic weirdo? No? That’s what I thought. #CollinsClan rise up.

So…ahem. The other linebackers! Jeremiah Owusu-Koramoah! It’s a lot to type, so we’re gonna call him “JOK”. A Tasmanian devil; a blazing fast, vastly undersized linebacker-safety hybrid who excels on blitzes and in coverage as what I like to call a “mismatch eraser”. Offensive coaches spend hours game planning how to get their best playmakers isolated against what they assume to be a plodding linebacker only to see JOK run stride for stride with their fastest player down the field.

Sure, 215lbs is alarmingly light, but he certainly doesn’t play like it. He’s strong for his weight. He showed some ability to take on blocks from much larger players and can deliver some absolutely crushing hits when he’s coming downhill. In fact, I’d go as far as to say that despite being almost 50lbs lighter, he hits with more viscousness than my paramour Zaven Collins. His speed also makes him a terrifying blitzer.

He isn’t going to be the apple of every teams eye. He’s actually thirty pounds (!!) lighter than last years linebacker-safety hybrid, Isaiah Simmons. He’s not a do-it-all LB prospect. If you’re drafting him, it’s to fill a specific role in a specific scheme. Do the Jets have a place for him? Perhaps. It was reported during last months free agency period that the Jets pursued signing former Falcons safety Keanu Neal and playing him as a hybrid WILL linebacker. That suggests that the Jets are in fact looking to add an undersized coverage linebacker who can blitz and cover athletic tight ends. Honestly, if he’s there at #23, Owusu-Koramoah could make a lot of sense as a plug and play WILL linebacker. I think there’s a fit for him in Saleh’s defense.

Imagine all the athleticism of Zaven Collins without the bulk or the instincts. Davis has eye-popping measurables but I worry that he can get washed out of run plays (even the undersized JOK seemed to take on blocks better) and he seems a step slow to react to whats in front of him. In coverage, he’s had some exciting flashes. I mean, just look at these testing numbers. The athletic potential is off the charts (almost literally). Davis is an alien.

The only blemish on his athletic profile is that aforementioned wiry frame. You have to wonder if he can add muscle without losing some of that ridiculous fluidity and burst. Davis seemed to truly emerge as a first round prospect after he matched up with Florida tight end Kyle Pitts perhaps better than any SEC defender all season: a pretty impressive feat, especially for a linebacker. I talked earlier about mismatches, and Pitts was a matchup nightmare all season. Seeing Davis run stride for stride with him really demonstrates what a freakshow athlete Davis is in coverage.

The potential is definitely there. Davis is a raw, exciting ball of clay who’s already flashed a ton of ability in coverage. However when you combine Davis’ concerning lack of functional strength, instincts, as well as rumored character concerns, JOK and Collins would be wiser investments for the Jets should they want a first round linebacker. Not to mention, drafting Jamin would mean the Jets have four players on the team who are Davises, including two Davises in the linebacker corps alone. Call me old fashioned, but that’s just too many Davises.

We’ll also take a cheeky look at some of the Day 2 linebackers as well. Baron Browning (Ohio State) & Nick Bolton (Missouri) are two highly touted prospects who unfortunately both suck, but for different reasons. Bolton is a heat seeking missile against the run but that’s about all he can do…he might be a two down player in the league. Browning is a much better athlete but hasn’t figured out how to actually play football yet. His instincts against the run and in coverage are suspect at best. Not to mention, it’s easy to have success when playing next to an athletic marvel such as Tuf Borland, the number one player on my Big Board.

On the other hand, I’m a fan of LSU linebacker Jabril Cox. He’s a solid all around player with upside. For most of his career, Cox has been a big fish in a small pond at FCS powerhouse North Dakota State, where he won three FSC championships. However, he wanted to prove he could hang with the sharks in the SEC. He responded with the best year of his career. As a graduate transfer, he’s an older prospect but that shouldn’t take away from what he was able to accomplish this year. If he’d played at LSU from the start of his career, we might be talking about his draft stock being way higher than it is. I’m not sure when on Day 2 he’ll ultimately go, but he’d be a good pickup if the board falls the right way.

But okay, let’s say all of the naysayers out there get their wish and the Jets don’t spend an early pick on a linebacker. Now what? Well, there are still some opportunities to take some swings very late in the draft where the Jets will almost certainly finish with more picks than they started with. I’ve scouted two guys to keep an eye on: Buddy Johnson & Derrick Barnes. And by scouted, I mean I asked Bleacher Report’s Connor Rogers for some sleeper picks and he told me about them. That’s just my personal scouting method but everyone grinds tape differently. Buddy Johnson is a four year player from Texas A&M. He’s a adequate run defender with decent instincts (which as we established is very important!). Unfortunately he really hasn’t put it together in coverage, although his athletic profile hints that he might have some of the requisite fluidity and explosiveness that allows some of the early round guys to succeed in coverage. As it is, he’s a decent stash and develop player who may be able to contribute right away as a gunner on special teams.

Derrick Barnes is an NFL longshot from Purdue, where he primarily played as a rush linebacker but also showed some potential off ball. He’s strong enough to come down and bang in run game and obviously his experience as a rush linebacker gives him some tantalizing upside as a blitzer in sub-packages. He also has some special teams experience. As I said, Barnes will have to fight to make an NFL roster but his somewhat diverse skillset could make him a worthy swing of the bat towards the end of Day 3.