JetsInsider.com > News > Blogs > No, Trevor Lawrence shouldn’t go back to school to avoid the Jets…you dummies 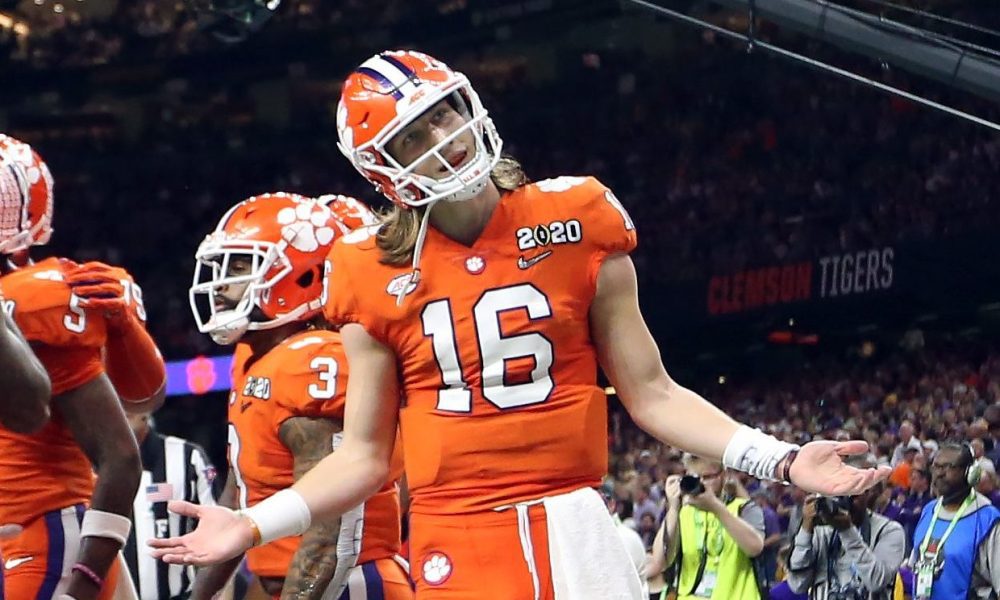 There’s usually just one silver lining to being a terrible team in the NFL: the worst team in the league gets to draft the best player in college football. This year is no different; the only thing keeping Jets fans from hurtling down a pit of despair is the hope that they will lose every game and have the opportunity to draft Clemson standout and future Head and Shoulders endorsee Trevor Lawrence. But lately, Jets fans haven’t been able to enjoy even that. There has been momentum building among the press and former players for this idea that Trevor Lawrence should return for his senior year at Clemson in order to avoid playing for the pathetic Jets.

That tweet garnered 39 thousand likes and almost five thousand retweets. It’s clearly a very popular view that this would be Lawrence’s most prudent course of action. Adam Gase’s tenure in New York has already drawn comparisons to the Rich Kotie era; it would be an absolute gut punch for the Jets to endure a brutal season only to watch the apple of their eye spurn them and return to college…just as Peyton Manning did to Kotite’s Jets so long ago. Will history repeat itself? I’m highly skeptical. Let’s break this down and discuss why I think this increasingly prominent theory is almost as garbage as the Jets themselves.

Firstly: let’s talk about what Lawrence would be risking by returning to Clemson: guaranteed money. This year’s first overall pick, Joe Burrow, was awarded with a slotted contract worth $36 million, with a signing bonus of almost $24 million. If Lawrence were to get catastrophically hurt during his senior season, the most he could hope to recoup with an insurance policy would be roughly $10 million dollars. So we’re talking about risking twenty six million dollars just to go back to school and specifically avoid the Jets. Whew. If I’m advising Trevor Lawrence, I’d better have a really good reason to take a risk that gargantuan. So, what is the case for avoiding the Jets?

As far as I can tell, it’s rooted in the belief that the Jets are such a cesspool, such an incinerated clown car, so uniquely terrible, that they will “ruin” Trevor Lawrence’s career before it even starts. Holding out would hypothetically allow him to go to a more structurally sound team and have a long, successful career. Again, Lawrence would be taking a huge risk by returning to Clemson. I think we’d need some irrefutable, solid proof that the Jets are a uniquely terrible team in order to justify that kind of a gamble.

There are currently a few teams in the running for the first overall pick, but there’s been nary a peep regarding a holdout for any of them except the Jets. Is Gang Green really that uniquely terrible? Could these other Lawrence suitors be entrusted to develop his considerable talents? Let’s take a look at just some of his other options:

They chased away their star LT Trent Williams by misdiagnosing a tumor that later turned out to be a rare form of cancer. Williams blames the team for almost costing him his life.

Just a few months ago, practically their entire front office was embroiled in a massive sexual harassment scandal where women were harassed, ogled, groped, and then threatened into silence. Despite this, owner Dan Snyder denied any sort of evolvement in the toxic culture he clearly created. He spent years refusing to fire Bruce Allen, one of the worst general managers in sports, simply because he and Allen were friends. After firing the previous general manager, Scot McCloughan, Snyder exposed McCloughan’s struggles with alcoholism to the media in an attempt to smear his former employee. He then restored his buddy Allen back to the position of general manager.

But it’s just not the front office where Washington is incompetent. Want to talk about “ruining” quarterbacks? Do the initials “R G 3” ring any bells? After one of the most promising rookie campaigns in the history of sports, Robert Griffin III was utterly smashed to smithereens by the incompetency of the Washington Football Team. After another brief public feud with their one time star, Washington tossed him in favor of Kirk Cousins…who’d they’d ultimately force to play for two years without a longterm extension. After alienating both Cousins and Griffin, Washington is currently in the process of ruining the confidence of their latest sacrificial lamb: Dwayne Haskins. So to recap, Washington has demonstrated the propensity to ruin the careers of talented young quarterbacks and the one time they actually got a good one, they flat out refused to pay him…and yet there isn’t a single person suggesting Lawrence should return to school in the event they are picking first.

When it comes to incompetent management, the Giants are true to their name: they tower above the competition. Over the last five years, the Giants have the worst record in the NFL despite competing in the league’s easiest division…they are 5-16 in said division over that same time period.

Lawrence would have to play behind the worst offensive line in football, according to Football Outsiders data. They currently employ one of the worst general managers in the league who has mismanaged both his draft capital (most recently selecting the struggling Andrew Thomas fourth overall) and his financial capital…bogging the team down with backbreaking contracts such as the $30M he shoved into the chest of retired gym teacher Blake Martinez. The Giants have the distinction of being both a terrible team and a highly expensive one, and for this reason, it’s difficult to see them improving anytime soon.

The Jaguars were good once. There was a time when they seemed like the the most exciting young team in the entire NFL. That time was 2018.

Since then, just about every young player involved with that championship caliber team have forced their way out. In a show of sterling professionalism and class, the ownership group has publicly feuded with a few of these players in the process. Is there a greater sign of organizational incompetence than a promising young core of players being so alienated that they literally refuse to play for the team ever again? Why would Trevor Lawrence want to play for a team that has, in the words of Jalen Ramsey, “disrespected” and self-sabotaged their only successful season in the last decade?

You could make a strong case against every single one of these teams being just as much of a disaster as the floundering Jets. Perhaps it isn’t the most shocking thesis in the world: teams that lose a lot of games tend to be poorly run. It’s exceptionally rare that a well run team is unlucky enough to secure the #1 overall pick; should Trevor Lawerence return to college, he’d certainly find an equally unappealing slate of potential suitors waiting for him in 2021. Heck, it might even be the Jets again! Unfortunately, that’s life as a top draft pick in the NFL.

The hysteria over the Jets “ruining” Lawrence isn’t based on fact…it’s just a hazard of playing in the New York media market. When you play in the Big Apple, you unfortunately have to deal with the Big Apple Circus. People will continue to pretend that the Jets are uniquely terrible situation for a young quarterback, however, they are likely to be just the latest in a long line of terrible teams to land the first overall pick. I hate to rain on anyone’s parade, it’s a great discussion for generating clicks and comments, but the idea that Trevor Lawrence would risk his financial future just to avoid the Jets makes no logical sense. I would be stunned if it happened.