Cortland, NY – After a day off, the Jets came back to the practice field NOT looking rested and ready to go, but sloppy. Coach Rex Ryan expressed disappointment in the team’s performance on both sides of the field today. Ryan said, “Not a whole lot going for us…the focus wasn’t there.”

In a blur of bad play today, there was good news for Team Sanchez. “One guy I will say who came out to practice was Mark Sanchez,” Ryan said. “I thought he looked sharp…I liked the way he was in the huddle. He was ready to go today. There is no question about that.”

“I felt good. I felt good,” Sanchez said about his performance. Never one to credit himself, he praised the rest of the offense for helping to make him look good, especially on one nice drive that resulted in a touchdown.

It was the highlight of today’s practice. “It was a good mix of passes, screens, everything,” Sanchez said. “It’s kind of the way we want to run things in a nutshell in one drive.”

You can tell it’s the kind of drive that gets him excited about playing in Marty Mornhinweg’s system this season.

“That one drive we had today looked like the way you want it,” Sanchez said. “We mixed in a whole bunch of personnel, whether it was three tight ends, two tight ends, two running backs, 5 wide receivers…we had receivers in the back field, running backs lined up at receiver. That’s the kind of stuff you want to do.”

Sanchez got a reminder of how unhappy Jets fans sound on Saturday at the team’s Green v. White scrimmage after throwing an interception into Cromartie’s hands.

However, Ryan wants fans to look at this new season as a blank page and forget about last year’s ghosts. (That sounds a bit cliché, but NFL press conferences are a goldmine for clichés…oops, there’s another one.)

“I think we need to move forward,” Ryan said. “The things from the past are from the past. Let’s just focus on what’s going on in front of us.”

Ryan also said he’d never tell Jets fans what they can or cannot do, so I guess if you want to stay hung up on last season you can (but that would just make you sad). 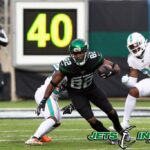 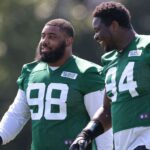 Setting the Tempo: The Jets Defensive Line is Creating a Menacing Presence 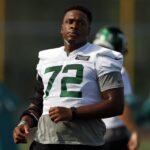