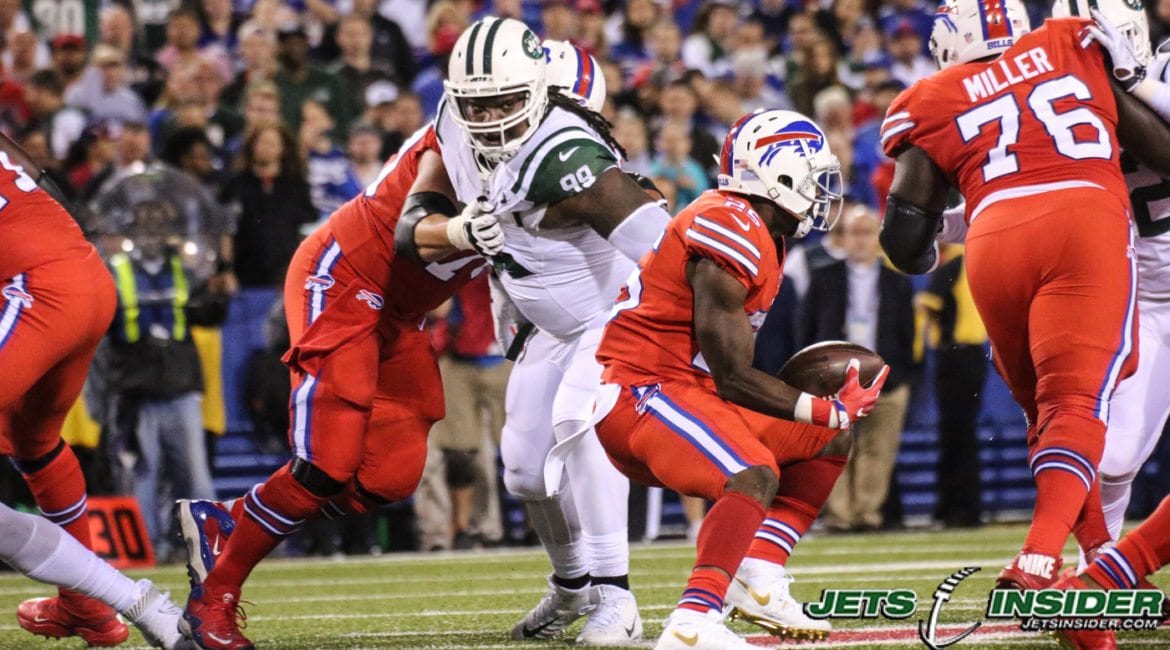 The New York Jets host the Buffalo Bills for their annual Thursday Night Football matchup on November 2. This is the second meeting between the divisional rivals with the Bills taking the first game Week 1, 21-12.

The Jets are on a three-game losing streak following their 25-20 loss to the Atlanta Falcons. They stand at 3-5, seeding them at the bottom of the AFC East. The Bills, meanwhile, come off a 34-14 win over the Oakland Raiders. Their record is 5-2, a half-game behind the New England Patriots in the division. Here what to watch for in the game:

LeSean McCoy vs Jets Rushing D- In the first matchup between the Bills and Jets, McCoy rushed for 110 yards. While he didn’t score any touchdowns, McCoy shortened the length of the field, putting the Bills in good position to score. In addition, he rushed for 157 yards against the Raiders last week, proving he hasn’t slowed down. However, the Jets rushing defense wasn’t as good in the beginning as it is now. In fact, no other running back has rushed for 100 yards against New York since McCoy did it Week 1. The defense has improved a lot, so McCoy will have a tough task if he wants to continue his success.

Rashard Robinson vs Bills Receivers- The Jets traded their fifth-round pick in the 2018 NFL Draft with the San Francisco 49ers for Robinson just before the 4 pm trade deadline Tuesday. With Morris Claiborne (foot) and Buster Skrine (concussion) coming off of injuries, Robinson will likely be asked to do a lot against the Bills’ receiving core. That might be too much to ask from a guy who has only had one day to learn the defense. Still, Jeremy Kerley, who played with Robinson on the 49ers last year, complimented his work ethic.

“He’s a dog,” Kerley said. “I think he fits any defense. He’s a ball player, so he can adjust. He just brings a lot of energy to the game.”

Jamal Adams, who was Robinson’s teammate back at LSU, agreed with Kerley, claiming Robinson brings “a lot of swagger and energy.”

Josh McCown- When McCown completed his first regular season game as a Jet, his stat line was less than spectacular. He completed 26 of 39 passes for 187 yards and two interceptions. Since then, he’s gotten better, throwing for less than 200 yards in two games (166 yards Week 2 at OAK and 194 yards Week 5 at CLE) and completing two-thirds of his passes in six of the following seven games, putting him as one of the top-10 most accurate passers in the NFL. This game is all about redemption for McCown, not just for Week 1, but also the last three games the Jets let slip away.

Matt Forte- Forte came out frustrated with his role in the offense after the loss to the Falcons. He only had four carries the entire game as Todd Bowles continues to split the workload in the backfield between Forte, Bilal Powell, and Elijah McGuire. Against the Bills Week 1, Forte carried the ball six times for 16 yards. The one thing that will be on Jets’ fans mind Thursday is if Forte can produce in the rushing game and prove he deserves more than four carries or will his frustration cause trouble.

Jamal Adams- With Skrine and Claiborne hurt, the Jets’ secondary will be at a disadvantage. But with that disadvantage comes opportunity. Throughout the season, the coaches and players have praised Adams’ leadership, especially considering he’s only a rookie. He’ll be the one the secondary looks to for weaknesses with the Bills’ offense.

This game will be closely contested, but the Bills get the victory. They traded Marcell Dareus to Jacksonville, but the Bills defensive line is still a threat to get to the quarterback. McCown has been sacked 25 times this year, and the Bills will only add onto that. Giving a new player a day to learn the defense is bad enough, but putting him as the second- or third-string cornerback after one day won’t bode well for Robinson or the Jets. The Jets have kept games close, but haven’t been able to close out the game when they had the lead. All these factors point to Buffalo getting their seventh win in the last nine meetings against the Jets.