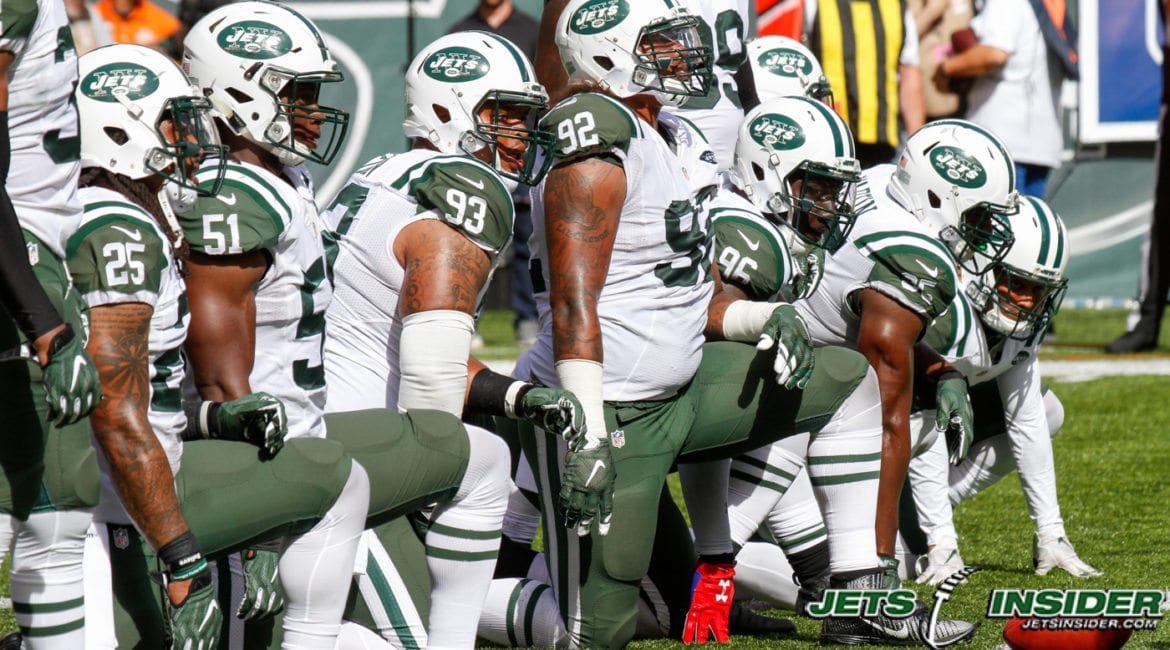 “Shocking the world” is usually a term for postseason sports. You normally don’t expect a team to “shock the world” in a Week Six match up between two division rivals. Yet, when the New York Jets host the defending Super Bowl champion, Patriots, Gang Green has a chance to do just that. Both teams sit at 3-2 and both teams have a chance to get to first place in the AFC East with a win on Sunday. The only thing that stands between the Jets and first place? Oh, just Tom Brady and Bill Belichick.

There is room to be positive for the New York Jets heading into this game. Riding a three game winning streak, and a defense that continues to improve by the week, the Jets return home after their 17-14 win over the Cleveland Browns. Having this game at MetLife Stadium should be good news for the Jets. In the last four match-ups between the two teams, the Jets are 2-2 at home. Each game has been decided by six or fewer points. Buckle up Jets fans, here is what to watch for:

Jets Front Seven vs. Patriots O-Line- To say the Patriots Offensive Line has been bad this season is not enough. If there is one major flaw that this offense has, its their inability to protect this future Hall-of-Fame QB. Through the first five games, Tom Brady has been sacked 11, 17 quarterback hits and 77 total pressures this season. The New York pass rush is one that can easily get pressure against Brady even if Wilkerson does not play Sunday. The largest key will be getting pressure up front. Throughout his career, Brady has struggled when the pressure has come up in his face as opposed to from the outside. If Leonard Williams has a big day, then do not be surprised if the Jets are in a position to win.

Jets Secondary vs. Patriot Weapons- Five different pass catchers for the Patriots have over 20 catches. Four have over 200 yards receiving. The Patriots have an incredibly deep array of weapons on the offensive side of the ball that has caused nightmares for some of the better defenses this season. Head Coach Todd Bowles spoke about the challenge of playing against so many weapons on offense by saying “Well, it’s hard because you cant get a beat on them. All of them can do everything. It’s not like one is a catcher, one is a runner, one is a blocker. They all can do all phases of the offense, so it makes it tough on you and they all have a different skill set. But they’re similar in what they do, but they all have different skill sets that set them apart that they use very well.” If the Jets have any chance of at least limiting Brady and Co. it will be because they do not give up any big plays. A tall task for a young defense.

Todd Bowles: I know he isn’t a player but this is a huge game for Bowles. Over the course of Bill Belichick’s career, on many occasions opposing head coaches would try to over-analyze the match-up and try to one-up him. Bowles cannot do this on Sunday. There are favorable match-ups on both sides of the ball, but if Bowles tries to over-analyze Belichick’s team then Bill and the Pats will feast on the Jets. As long as Bowles keeps it simple, and tries to exploit the Patriot weaknesses, then the Jets will be fine. Easier said than done, but this will be huge for Bowles’ career if he doesn’t overthink the matchup.

Bilal Powell: Pass rush, and a ball-control offense. That is the proven formula to beat the New England Patriots. That means the Jets will have to run the ball effectively for the entire 60 minutes of this contest. Powell will be the bell-cow in this game. Whether that is in the pass game, or Morton and Bowles decide to give him 30 rushes, it does not matter. the Jets win games when they run Powell effectively. The only way they beat a juggernaut like the Patriots, is to run Powell all game long.

Make no mistake, this will be a close game…for a half. The New York Jets will trail 7-6 at the half thanks in large part to a ball-control offense and a defense that hits home early. However, there is no way the Jets hold Brady’s offense for a full four quarters. Brady will always get his in the end and no-one on planet Earth should expect Josh McCown to have the tools to match the Hall-of-Famer. The Jets will have many personal victories throughout the game, but they just do not have the talent yet to compete with Tom Brady and Bill Belichick. It will be close early, but mistakes from McCown and the defense will make this game a late laugher.