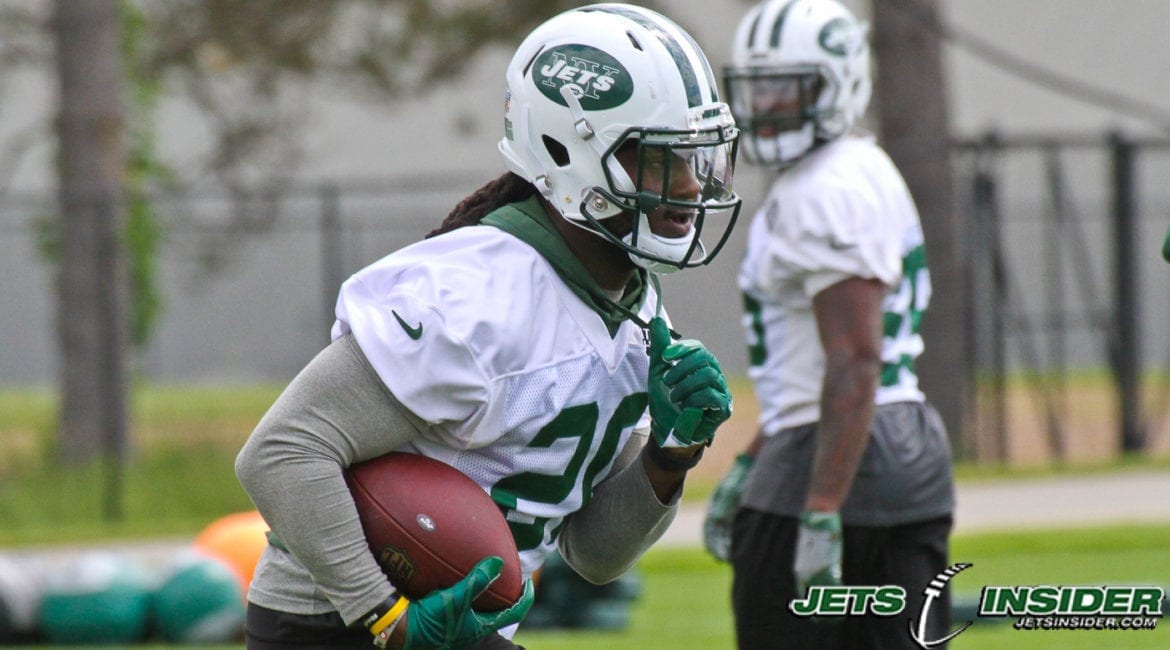 FLORHAM PARK, NJ – With the 2018 season right around the corner one of the most interesting positions to keep an eye on is running back. With two new incomers and a drafted rookie, the Jets backfield is loaded with young talent. Here’s an in depth look at how the rotation should pan out and who looks to shine in green.

Isaiah Crowell – After signing a three-year, $12 million deal this offseason, Isaiah Crowell looks to carry the load as the main tailback in a backfield full of quality pass catchers and young guns. Last season Crowell played in all 16 games for the winless Browns, rushing for 853 yards on 206 attempts. For his four years in the league, Crowell has consistently hovered around four yards per carry for one of the worst teams in the league. The power running style he brings will remind Jet fans of the Thomas Jones days. He also managed to catch 28 balls out of the backfield last season, while having a rotation of quarterbacks throwing to him. This year looks to be different for Crowell. With the Jets committed to the run, he will get all the opportunities to shine. The outside threats of Robby Anderson, Quincy Enunwa, Jermaine Kearse and Terrelle Pryor should help expand the field and give Crowell even more lanes to work with. If the offensive line can hold up, expect Crowell to dazzle in his first year with Gang Green.

Bilal Powell – Entering his eighth season with the Jets, Bilal Powell will continue to provide quality work but this time as mainly a pass catcher/third down role. Powell handled most of the running back duties for the Jets last season, rushing for 772 yards on 178 attempts. His five touchdowns led all New York runningbacks. With Crowell signed you can expect him to handle the power/inside running with Powell being used more as a playmaker in space. Assuming he plays like last season, he should have no problem commanding targets in catching situations, especially on third downs. The 29 years of age may be concerning for some fans, but the veteran leadership is important to have. Powell is a proven vet who always exceeds the role he is given. The one-two punch of Crowell and Powell is going to be a nightmare for linebackers, so get your popcorn Jet fans.

Elijah McGuire – When Elijah McGuire was picked in the sixth-round of the 2017 draft most fans were quick to write him off as to whether he would have any impact at all. In his rookie season, he showed glimpses of underrated speed and agility. He carried the ball for 315 yards and one score in his rookie season. McGwire’s numbers don’t jump off the page but his most impressive game came against the Jaguars in week four, where he rushed for 93 yards on 10 carries, including a 69-yard touchdown run. McGuire struggled at times to find lanes, but part of that was due to the poor offensive line play. Though McGuire should be the third string back, a strong preseason and start to the season might earn him enough playing time to slip into the number two role.

Thomas Rawls – The Jets inked Thomas Rawls to a contract this offseason in hopes that he can return to his old form. After rushing for 830 yards in his rookie season, he has slowly declined in the two seasons following. Rawls yards per carry dropped to 3.2 in 2016 and 2.7 in 2017. Several lagging injuries have played a part in his decline. Since entering the league, he has been on the injury report multiple different times, most notably in 2016 with a fibula problem. When healthy, Rawls has shown flashes of a quality lead back, but for now is not trustworthy until proven. His chances of making the team are slim, but still on the table. A strong preseason may land him more playing time over McGuire, but it is hard to see the Jets giving up on their second year runningback.

Trenton Cannon – Cannon was taken with the 30th pick in the sixth-round of the 2018 draft out of Virginia State. At 5-foot-11, 185 pounds, he operates like some of the other jets backfield. Small, elusive, and a great tackle breaker, Cannon has big play ability written all over him. Scouts noted his lack of size as his biggest flaw coming into the NFL. An offseason in the weight room and studying film are Cannon’s best options for now. Teams often tend to cut late round picks, so with a crowded backfield it wouldn’t be a shock to see Cannon gone before week one, but Cannon could solidify a roster spot by contributing on special teams and winning kick/punt return duties.

Naming Sanchez The Starter Is A Mistake,Draft Talk Jets To Look At Fresno State Rb Matthews,And You Thought It Couldnt Weirder Than Tripgate,New York Jets Vs Jaguars Look Back Divisional Playoffs 1998,Friday Fantasy Focus Be The Best Loser You Can Be,Meet The Late Round Picks,The Chicken Or The Egg,Mini Camp Day 2 Notes,Jets Positional Preview Offensive Line,Westhoff Divulges Details From Leg Injury