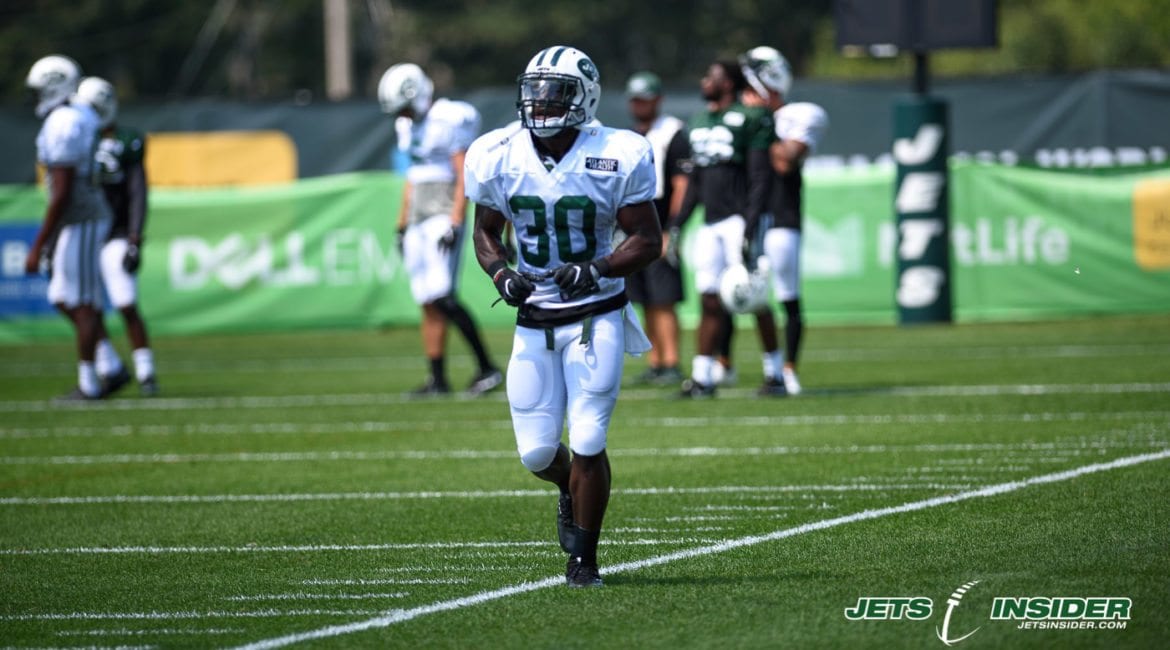 Romar Morris stands a few feet behind Josh McCown. He knows the ball will be handed off to him and will only have a few seconds to figure out how to get by the defensive line. He could run left towards Sheldon Richardson, or run to the right in the direction of Muhammad Wilkerson, or take the ball up the middle against Steve McLendon. He can’t think about it too long, or he’ll be swarmed by the Jets’ defense in the backfield. McCown yells “Hike!” and backs up a few steps to hand the ball to Morris. Morris takes it, and in a split second, makes a choice.

With Matt Forte (hamstring) and Bilal Powell (sore neck) sitting out, it’s opened the door for running backs like Morris to show what they can do. Continuing the New York Jets’ training camp theme of position battles, Romar competes against Elijah McGuire and Jordan Todman for the third-string running back position. He isn’t bothered by the battle. In fact, Morris welcomes it.

Morris came to the Jets in 2016 as an undrafted rookie from the University of North Carolina. In four years as a Tar Heel, he totaled 1,024 yards and 12 touchdowns on 213 carries and 499 yards and two touchdowns on 54 receptions. Realizing the numbers weren’t as impressive as some of the other running backs in his class, Romar turned his attention to special teams, where he said he enjoys playing and felt there was a much better chance for him to make it to the pros as a return specialist. What Morris had going for him was his speed. He recorded 40-yard-dash times of 4.30, 4.35, and 4.36 at pro day for UNC, and also claimed he ran a time of 4.28. The Jets waived him at the end of training camp 2016 because of a shoulder injury that required surgery.

Now Morris has another chance to play football, and not just as a return specialist, but also a running back. He credits his improvement from feedback he received from Forte and Powell.

“Every time I come off the field, they’re always critiquing me or telling me something that I need to work on. I use it as a helpful tool so I can improve my game. Those guys have been like brothers to me.”

No one, however, said it was going to be easy once a player gets an opportunity to shine. In fact, that player may take a few knocks along the way. That’s what happened to Morris during practice not once, but twice. His first hit came from Demario Davis during 11-on-11 drills, to which Morris came face-to-face with Davis, but all that could be heard was Davis yelling, “what are you gonna do about it?” repeatedly then shouting “woooo!”. The second hit came during red-zone drills courtesy of Freddie Bishop. But he merely brushed those incidents off as nothing.

“It’s just football,” Morris said. “I take a lot of hits. It’s all about how you get back up and react to it. I am a running back so I expect it. Whatever hits come, you just have to absorb them and get up and run the next play.”

Until Forte and Powell return to the backfield, they can expect to see Morris, Todman, and McGuire lining up behind the quarterback of the play. It should be a fun battle to watch moving forward in training camp.