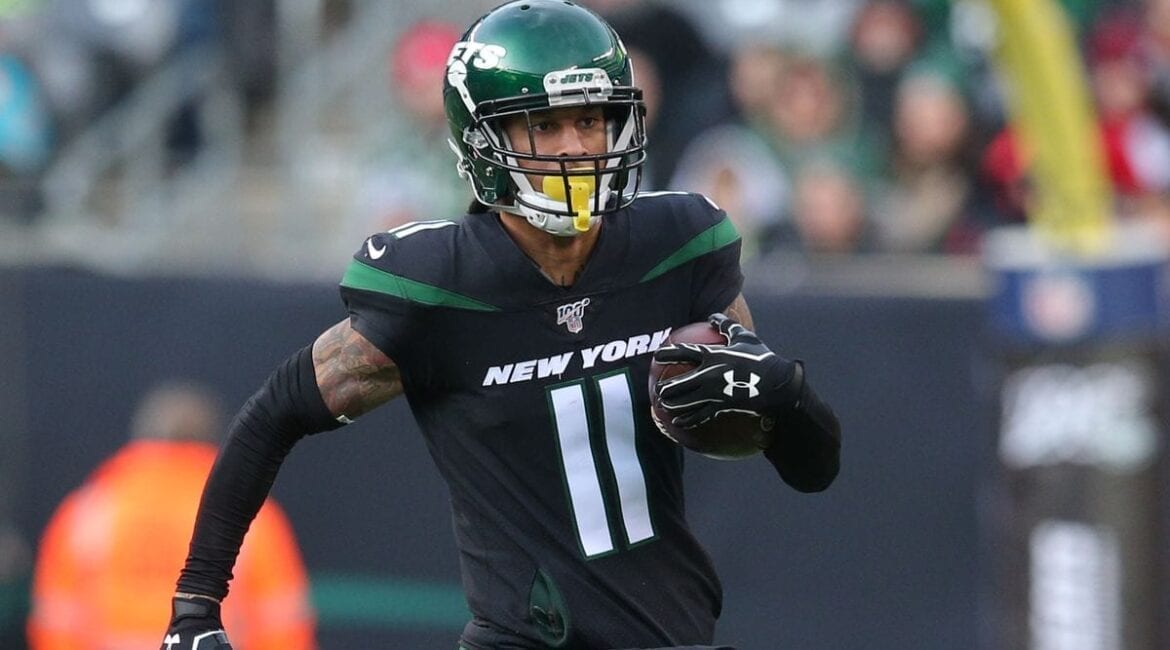 I recently waded through every penalty by a Jets opponent in 2019 and charted which Jet was responsible for drawing each of them (if the penalty was not of the “unforced” variety). Here are the top five Jets who drew the most opponent penalties:

Robby Anderson takes the throne by a mile, drawing three more penalties than any other Jet and creating more than twice as many penalty yards as any teammate.

If you added that hidden value into Anderson’s raw stat totals, it substantially changes the status of his production. Anderson’s 35 first down grabs ranked 54th in the league. If you add in the seven first downs he drew via penalty, he would have created 42 first downs, shooting him up to 34th. Anderson ranked 44th with 779 receiving yards. If you tossed in the 96 penalty yards, he would have 875 yards, good enough for 35th.

Of course, we could make these adjustments for every wide receiver in the league, and if we did, Anderson would not leap quite as high. The point here is, when you are evaluating a player, it is essential to keep in mind how they have impacted games beyond the simplicity of the box score. Anderson’s ability to draw penalties at a high level (he ranked ninth in pass interference yards with 82 and 12th in pass interference calls drawn with four) is a positive-impact trait that requires more than a simple statsheet scan to discover.

Let’s take a look at a few of Anderson’s flag-drawing moments in 2019.

Anderson’s longest drawn penalty was a 33-yard pass interference courtesy of Giants rookie cornerback DeAndre Baker in Week 10. Anderson flies right by Baker, then shows good awareness to come back towards the errant Sam Darnold pass, fighting through Baker to draw the foul as the rookie fails to get his head turned around.

Anderson’s intermediate game has come a long way. He has been able to develop that facet of his game by feeding off of the respect opponents have for his deep route running, which he has earned through plays like this one. Anderson gives Tre Herndon a hesitation move and then blows by him, drawing a 15-yard pass interference as Herndon tries to save face after being toasted. Had it not been for that makeup grab by Herndon, Anderson may have gone to the house for his second 92-yard touchdown of the season.

On this play, Anderson (right side) beats Craig James to the outside with a double move, prompting some blatant grabbing by James to prevent Anderson from gaining major separation. Anderson was unable to haul in a jump ball from Luke Falk, but the Jets move the chains thanks to Anderson’s win off the line of scrimmage.

Reinforcements Have Arrived,Afc East Draft Spotlight,Running Back Roulette,Three Observations Day Five Of Training Camp,How You Can Attend Santonio Holmes Charity Event On Sept 10Th,Time For Changes,Around The Locker Room For Dolphins Part Ii,Why So Quiet On The Jetsern Front,Jets Falcons Live Blog Direct From The Meadowlands,Made It Here In One Piece
share