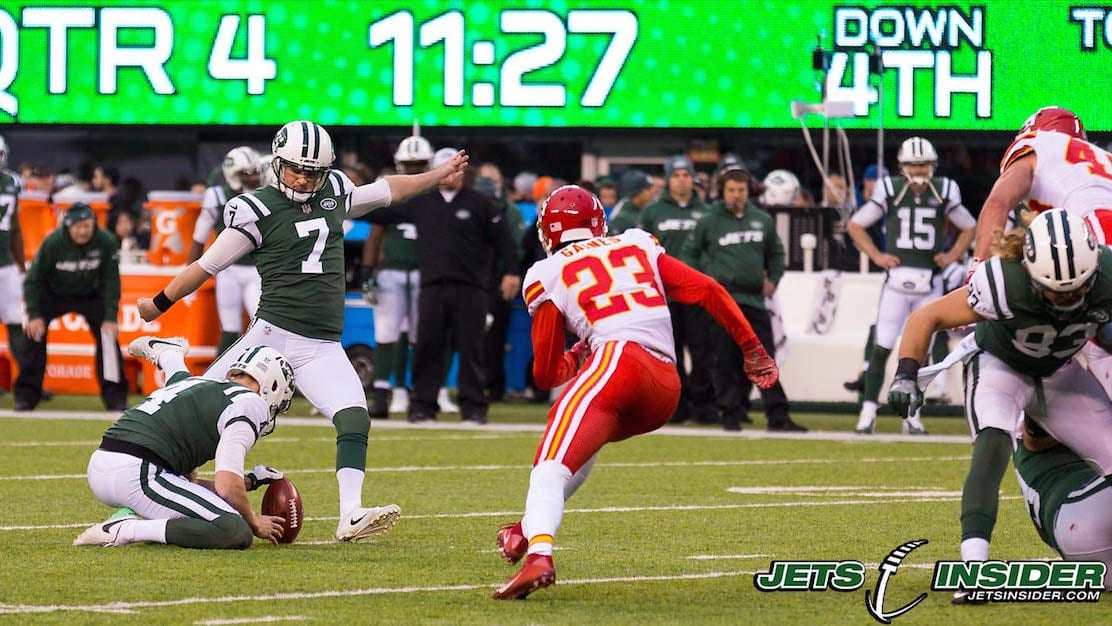 Florham Park, NJ: As you dust the first snowfall of the year off your car the New York Jets prepare to keep their slim playoff dream alive in sunny, warm Denver. Wait, does any of that lede besides snow in New York and New Jersey make sense? Either way, the Jets are preparing to visit the stadium with the highest altitude in the National Football League – Sports Authority Field.

Residing at 5,280 feet, Denver’s football home is the sport’s equivalent to baseball’s home run hitter’s park, for kickers. It has seen three of the five longest field goals in NFL history, the most recent one coming a little over exactly four years ago to the day – December 8, 2013 – a 64-yard field goal off the leg of former Denver Broncos kicker, Matt Prater.

That evening, Denver’s temperature was a bone-chilling 13 degrees. This Sunday it’ll be 62 degrees with sunny skies.

“It definitely doesn’t hurt,” Jets kicker Chandler Catanzaro laughed. “Denver could get anything: snow, sleet, wind. You’ve got to have respect for their kickers.”

Catanzaro has played in Denver three times. The kicker has gone 6-for-6 on field goal attempts and nailed a 59-yard bomb while playing for the Cardinals last preseason. Other kicks were good from 33, 34 and 48 yards. He knows that although the conditions favor a kicker, you can easily lose sight of your job.

“The ball carries a bit better but my routine, my processes have been going great,” he said. “I’m focused on that. I’m keeping my fundamentals strong. The altitude doesn’t help if your fundamentals are poor. It doesn’t make up for that. We had a great week of preparation, so I’m looking forward to a great game.”

Like every kicker, before every game, Catanzaro hits the field to test his leg strength to see how the ball will carry. When asked if a 60-yarder would be out of his realm, the kicker said:

“It would be pretty cool to have a long one but we’ll see what happens. I always tell the coaches, in each direction the yard lines I need to be at to have a shot at a field goal. I just test that out pregame and see how the ball is flying.”

Kicking field goals and kickoffs are just two aspects of the special teams battle that will be impacted by Denver’s thin air. Punter Lachlan Edwards is looking forward to his first trip to the Mile High city as an NFL professional.

“I remember when I saw the schedule come out, I saw Denver in December and I immediately thought three feet of snow,” Edwards joked. “So, we actually got pretty lucky that it’ll be pretty warm. Just excited to get out there and see how the ball flies.”

Edwards’ eyes lit up when he said the temperature would be a comfortable 62 degrees. It also helps that the wind should remain calm between 5 to 10 mph on Sunday.

“Really, if you keep it in the good spots and right direction, the ball will fly a bit nicer being there is a high altitude,” he said. “Hopefully this week we can get back to what we were doing the first five/six games of the year and really keep hitting them deep, inside the 20, and help out the defense as much as you can.”

Edwards and Catanzaro have provided solid production from the Jets’ special teams unit this season. Against a Denver offense that seems unable to get out of its own way of late, pinning the Broncos deep on a punt or kickoff will work largely in New York’s favor.

The last Jets victory in Denver came on October 17, 2010, 24-20. That game saw punter Steve Weatherford have five punts gain a combined 243 yards, averaging 48 yards per kick. His longest was a 54-yard-punt. New York’s kicker, Nick Folk, went 3-for-3 on PATs and nailed his lone field goal – a 56-yard shot.

Joe Barone is a staff writer for JetsInsider.com. He can be reached on Twitter (@28JoeBarone) or via email (joebarone28@gmail.com).