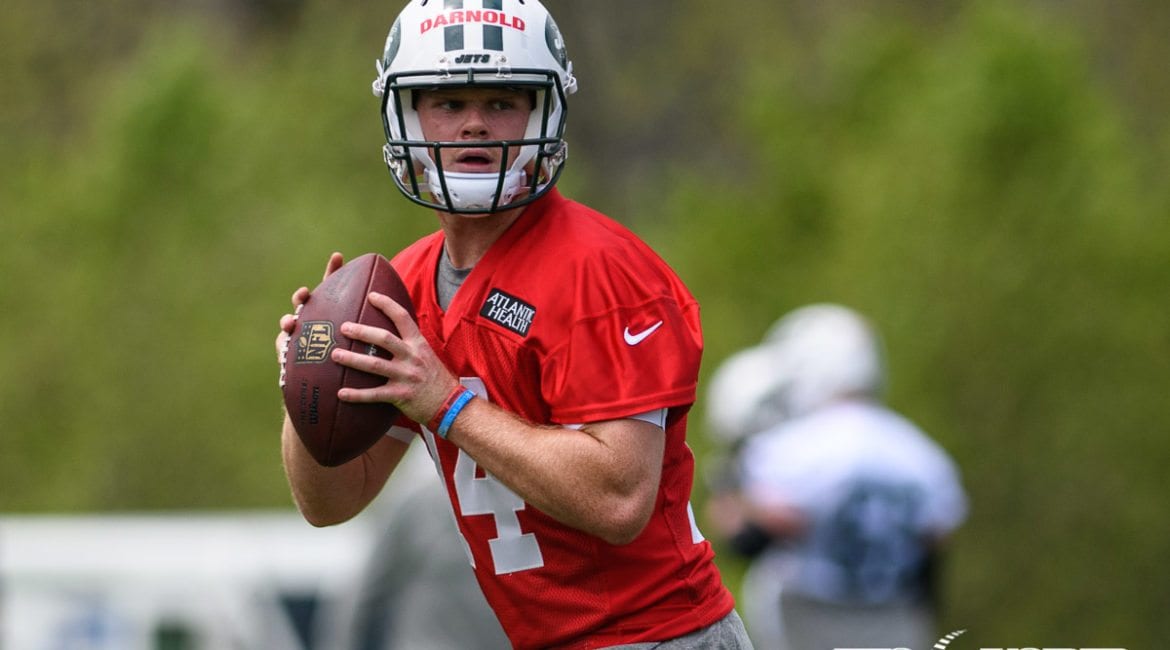 FLORHAM PARK, NJ – For the first time ever Sam Darnold stepped on a football field wearing New York Jets gear (practice gear of course) and threw a football in front of the New York media. Sure, that’s a lot of qualifiers on this debut, but with those qualifiers today counts as a debut of sorts for the rookie quarterback.

The day started with Darnold talking to a gaggle of reporters in the locker room, telling everyone that his main focus was learning the playbook then literally showing everyone that he meant it as he took a seat at his temporary locker and actually studied the playbook while reporters talked to his teammates. From there we took to the field and well, it went about exactly how you’d expect a 20-year-old, talented rookie’s first practice to go.

“Just knowing that, knowing that (the first day) is going to be a challenge (and) if something happens on one play just being ready to move onto the next,” Darnold said before his first practice. “Whether it’s a check-down or whether it’s a pick, you just want to be able to be poised throughout the whole practice like I really have been throughout my whole career.”

Darnold took every rep in team drills except one, when the coaching staff seemed to want to make sure he was hydrated, and he looked comfortable and in control the entire practice. He did botch three different snaps and threw an interception, which might have led to some jokes being made on Twitter, but the sloppiness of those exchanges weren’t just on Darnold as the center wasn’t exactly giving him clean snaps to work with on those three plays and the interception was because the ball deflected off of his target’s hands and bounced into a defender’s. Still those mistakes are exactly what to expect on day one of rookie camp and as the man said he would, he remained poised and responded by shaking the mistakes off and moving on to the next play.

He made some really good throws and some not good throws, more good than bad, but with it being the first day of rookie camp, no more than a handful of players practicing that even have a shot at making the final 53-man roster and no pads there’s no real point in bothering to dissect each and every throw. The takeaway from today was all about how Darnold carried himself throughout the day. He was calm, controlled, comfortable and in-command of the offense. He made some mistakes with accuracy, but he didn’t seem lost or confused for even a single second.

No one would blame you if you were to wonder if a 20-year-old rookie was ready for everything that’s about to come his way playing in New York and for the Jets (a team that has been quarterback starved for as long as many fans can even remember), but he’s not about to run from the challenge or the pressure. He’s ready to embrace it and make you a believer in the process.