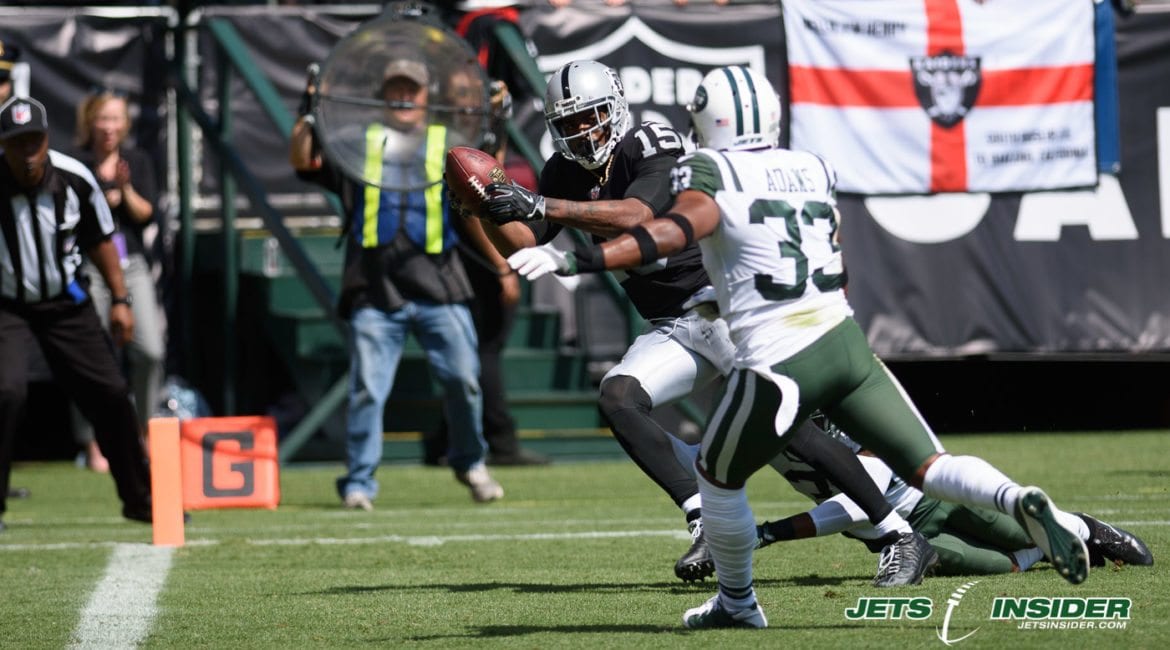 There were several factors that worked against the Jets. The Raiders were the overwhelming favorites to win, they were playing in O.CO Coliseum, which usually draws large crowds at football games, and they had the task of slowing down an offense that could dominate in either the passing or rushing game, or even both. Michael Crabtree was the star receiver in the game with six receptions for 80 yards and three touchdowns. In addition, Amari Cooper and Jared Cook each caught four passes.

Rush defense was a struggle for the Jets last week against the Bills, and it continued today. Marshawn Lynch rushed for 45 yards and one touchdown on 12 carries. However, even when Lynch wasn’t rushing the ball, the Jets defense was still getting burned in the running game. Cordarrelle Paterson pushed Oakland’s lead to 15 when he rushed the ball 43 yards to the end zone. Then Jalen Richard added another score to the lead with a 52-yard rushing touchdown.

The bright spot for the Jets in this game was Jermaine Kearse. Josh McCown found him open in the end zone twice for the Jets’ only touchdowns in the game. The first touchdown catch was crucial in the game. After the Raiders got out to a 14-0 lead, the Jets moved the ball to the Raiders 34-yard-line. McCown lobbed the ball to Kearse near the sideline, and he grabbed it and ran it into the end zone to bring the Jets back to within seven. It’s impressive to see how involved Kearse has been in the offense, especially considering he’s been on the Jets for only two weeks.

“[The chemistry] is going well, but we still lost the game, so that doesn’t really matter,” Kearse said.

More importantly, Kearse’s first touchdown swung momentum in the Jets’ favor. Fans could feel the shock of the Raiders when the Jets scored, and the confidence in New York rise. The Jets defense forced the Raiders to go three-and-out on two drives, and the Jets found themselves within four heading into the two-minute warning of the first half. However, that all changed when Kalif Raymond muffed a punt that set up Oakland at New York’s 4-yard-line. Head coach Todd Bowles spoke about the muffed punt following the loss.

“You can’t turn the ball over in your territory right before halftime. We still had momentum,” he said. “We can’t have the mistakes here and there.”

Next Sunday will be the Jets home opener as they host division rival Miami Dolphins. Kickoff is at 1:00 PM.

2019 Nfl Draft Qb Rankings,Jets 17 Panthers 6,The Talkative Reign Of Rex,Jets 1 2 0 At Jaguars 2 1 0,Is A Change At Running Back In Order,Moss To Jets I Prided My Offseason To Staying Off Revis Island,Another Playoff Less Season In Jets Land,Meet The Prospects Akeem Ayers,Rex Ryan Deserves A Contract Extension,Jets Survive In Ugly Fashion And Other Thoughts