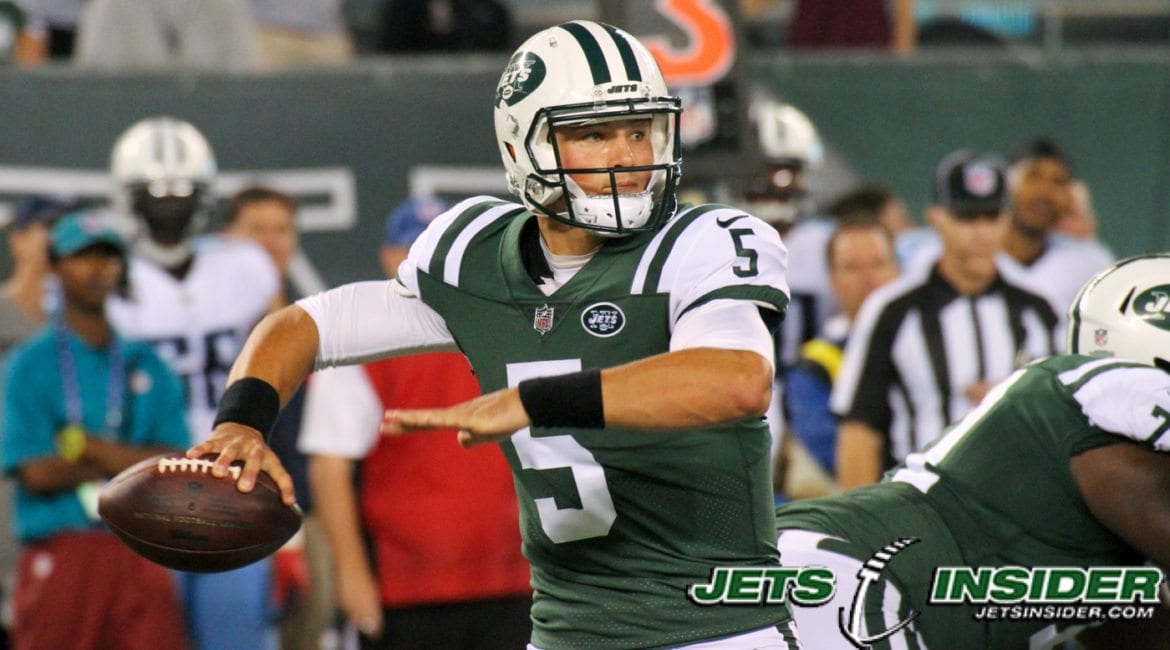 Florham Park, NJ – We are more than halfway through training camp and now I bring you good news. News that all Jets fans have been waiting. Forgive me when I eventually rain on this parade and try to temper your excitement, but even as I do that know that there does seem to be actually progress. So while I will try to encourage you fans to not get too carried away, I will understand if you want to get a little carried away just for this moment. After all you’re Jets fans, you’ve earned at least that much.

Since I’m not evil I will skip the suspense and jump straight to the observations and I’ll start with the one you want to hear most.

1) Hackenberg has had his best back-to-back practices yet – If you’ve followed me on Twitter or paid attention to my writing you know that I have never been sold on Christian Hackenberg becoming a franchise quarterback. Despite the constant people in my mentions claiming that I’m biased or I have something against the kid, I have always said I’m open to having my mind changed if he proves me wrong. I’m not infallible in any aspect of life and certainly not when it comes to judging quarterbacks and don’t mistake this as me admitting I was wrong, because we still have a ways to go before I even start to think about that, but there are signs that maybe, just maybe he is making actual progress.

Reporters have been talking about his progress from last year all camp and that sounds great until you realize what he looked like last year, all it really meant was he didn’t look completely lost and overwhelmed. While plenty of people got excited about his preseason performance myself and others were there to point out his incredibly low yards per attempt and how he missed badly on his two throws that traveled more than 10 yards downfield in the air. Admittedly there were encouraging signs in that game, mostly his quick and decisive decision making, but not enough worth actually getting excited about. Again I will warn you to preach patience and not get carried away, but what we saw these last two days of practice is more important than what we saw Saturday night.

For the past two practices Hackenberg has been the best quarterback on the field. Yesterday he was pretty good, but mostly won the day by default. Today he still would have won the day by default, but he turned in a really good practice without grading on any type of curve. It was far from perfect, but he showed a little bit of everything. The highlight of the day was on a go route to receiver Dan Williams. Williams darted straight down the left sideline and Hackenberg threw a gorgeous dart around 40 yards in the air, Williams got away with a tiny little push off, but that’s not to take away anything from the pass as it dropped perfectly over Marcus Williams’ head and into Dan Williams’ arms.

But we’ve seen those passes before, the problem is they are usually followed up by a handful of inexplicably awful passes. That didn’t happen today and in fact they have been happening less. It does look like Hackenberg has an actual grasp of the offense, though he and both the other quarterbacks are still having too many problems getting plays in and set, and he is noticeably more confident.

This could all mean nothing, I’ve seen Geno Smith and Mark Sanchez have even more impressive practices, I thought after seeing enough of those strung together that it might have meant something only to be proven wrong. Maybe this just means Hackenberg has improved, but still not enough. But maybe, just maybe it’s the start of a starting caliber quarterback getting into a rhythm. Stringing together good practices is a good sign, but it’ll be stringing together good games that matter.

2) THE JETS STOPPED A WHEEL ROUTE – The first observation was guaranteed to get everyone excited, this one is guaranteed to get at least a healthy portion of the more defensive-minded fans excited. It’s no secret that the Jets have struggled with pass coverage from their linebackers since the dawn of time, or at least the dawn of defenses needing linebackers capable of pass coverage. All coverage from linebackers, but specifically the running back wheel route. Well today, for the first time in my memory I saw a Jets linebacker successfully break up a wheel route and it was every bit as glorious as you are imaging.

Bilal Powell returned to team drills today and looked every bit as good as you’d hope/expect, but when he ran a wheel route up the left side he didn’t have an automatic catch like we all assumed and it wasn’t because of a bad pass either. It was because Darron Lee played it perfectly, he turned up field with Powell while staying between him and the quarterback, turned his head and swatted the pass away. It was what I imagine seeing a unicorn felt like, I was in shock. It also wasn’t the only good play in coverage by a linebacker, earlier in practice Demario Davis had underneath coverage as Charone Peake came across the middle, McCown thought he had Peake for an easy completion but Davis kept up and knocked the ball to the ground.

3) Jamal Adams continues to do grown man things – It’s been a little while since I’ve talked about Jamal Adams in these observations, but that’s mostly because I’m trying to find other things to talk about. I could easily include a daily Adams observation if needed. Today I’m only going to talk about one play, but it’s a play that perfectly encapsulates what Adams is as a safety. McCown had tight end Eric Tomlinson on the sideline, Tomlinson even had the ball on his fingertips, but then Adams lowered his shoulder into Tomlinson causing Tomlinson and the ball falling separately to the ground.