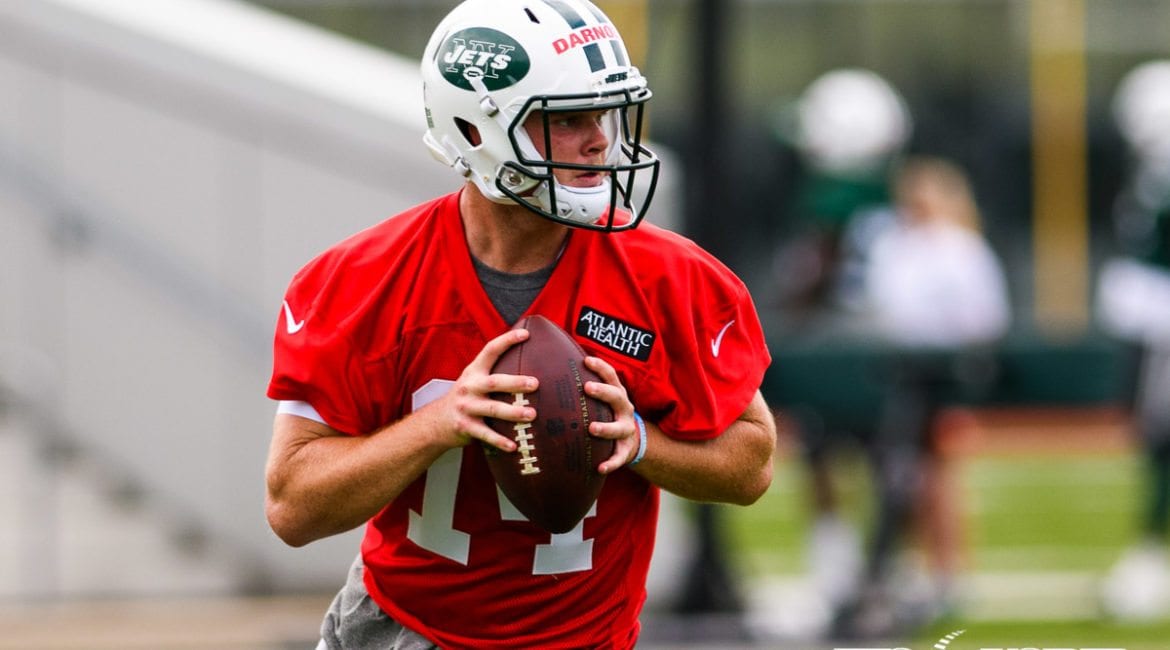 The New York Jets 2018 training camp got underway Friday. Here’s three observation from what happened on day one:

Sam Darnold, the third overall pick in the 2018 draft was absent from practice Friday due to ongoing negotiations with his rookie contract. Some expected Darnold’s deal would maybe get done before the 1:50 start time for practice but to no avail. The rumors of Darnold starting week one may dwindle each day he does not attend camp. Instead, Josh McCown worked with the first-team for the entirety of practice while Teddy Bridgewater ran with the second-team. Neither quarterback impressed on their first day. McCown came into the day with smiles on his face and a positive roar but remained quiet in the hours following. Though he did not make any real mistakes, there certainly was no flashes of excellence, typical of a 39-year-old quarterback. Bridgewater was even worse. Clearly, the fourth-year pro needed more time to get on the same page as his receivers. He missed wildly on a few routes during 11-on-11 team drills, and was nearly picked off by the Jets secondary multiple times. The quarterback competition has been well documented, and signing both McCown and Bridgwater to one-year deals made that even more clear, but today’s performance certainly does not make Todd Bowles job easier.

Running back Committee Shines on Day One:

With the addition of Isaiah Crowell to the Jets backfield, the running back group already becomes exponentially more diverse than last year. Crowell looked good in his first day of work, making swift cuts and catching passes out of the back with ease. He worked entirely with the first-team starters.

“I’m in very good shape. I’m getting down the playbook,” Crowell said. “The threats of (Quincy) Enunwa and (Robby) Anderson and those guys will be great. You can’t focus on one guy,” Crowell said.

Crowell goes from a winless Browns team to a young budding Jets team where he feels good about the direction this franchise is heading, saying “We got a lot of great guys ready to do great things. I’m excited.”

One of the biggest surprises on day one was rookie Trenton Cannon. The Virginia State product looked impressive returning punts and took a few outside runs for long gains. One of the main flaws with the Jets last season was special teams, especially returning punts and kicks so if Cannon can become that guy, the door is wide open for him.

With Jamal Adams and Marcus Maye entering their second seasons, the potential for the Jets secondary is sky high. The addition of superstar cornerback Trumaine Johnson gives the Jets a lockup number one corner and even more security. Resigning Morris Claiborne officially solidifies the Jets secondary for the upcoming season, pushing Buster Skrine back to a nickel role. All of them practiced today, with Maye the only one not involved in team drills. He sat out those for precautionary reasons following his offseason ankle surgery. Though there was no interceptions to report, the defense or “New Jack City” as they call themselves, looked like ballhawks all afternoon.

“Our goal everyday is to get better as a defense,” Maye said. “The more we’re around each other, the more we’re with each other, the better we will be.” First year safety Kacy Rogers II showed flashes as well, swatting a deep pass and forcing a fumble during 7-on-7’s. The Jets secondary can be one of the scariest in the league, and it shows on day one.

Rookie third-round pick Nathan Sheppard took a majority of the reps with the first-team defense. Elijah McGuire and ArDarius Stewart limped off practice with what appeared to be minor injuries. The first-team offense consisted of Quincy Enunwa, Robby Anderson, Jermaine Kearse and Terrelle Pryor. Pryor did not particpate in positional drills due to his healing ankle.