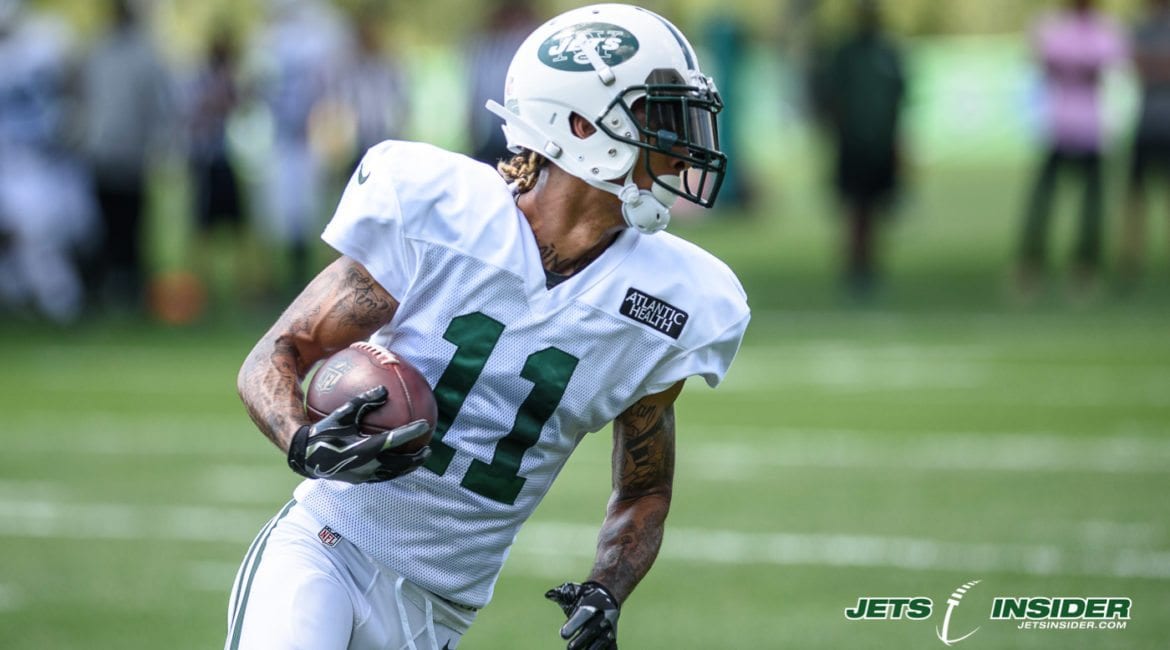 Florham Park, NJ – The offensive performance today was better than it was yesterday, in fact it looked to be pretty good until they went to red zone situations again and the offense stalled. Josh McCown found Quincy Enunwa for a touchdown with Buster Skrine in tight coverage, Enunwa did a great job and showed off his strong hands to make one of a few impressive catches on the day, but otherwise the offense couldn’t get anything going. At one point the coaches, clearly frustrated by multi false starts and a lot of confusion getting the play calls, literally pulled the entire offensive unit and made them run a lap. That was mostly the third string unit, though Wesley Johnson was also in there, but they were paying for not only their sin but the sins of the other two units.

Another day where none of the quarterbacks looked good, too many penalties and drops but the running game was able to get going a little bit and the receivers showed some fight as things got chippy on a couple of occasions which we’ll get to in the observations.

1) Cowbell – One of the most entertaining drills in camp is what I call the cowbell drill, it’s a one-on-one blocking/rushing drill where the defender tries to beat the offensive lineman and ring a cowbell that’s suspended hanging in the air. The players get after it, it gets intense and it’s a lot of fun to watch. On one rep James Carpenter stopped Muhammad Wilkerson dead in his tracks, but a little later Leonard Williams brushed Carpenter aside with relative ease to ring that cowbell. Lorenzo Mauldin looked good beating Ben Braden twice in a row, including an impressive spin move on the first. But it was rookie linebacker Dylan Donahue who stood out the most. Early in the drill Donahue beat Brandon Shell with his quickness only to get stuffed on the next rep, but rounds three and four both went to Donahue as he hit Shell with a spin move then followed that up with a powerful bullrush that pushed Shell backwards.

2) Robby Anderson – It was a better day for the receivers today, Enunwa had the one touchdown pass in red zones and had another ridiculous catch in 7-on-7s where McCown lead him too much but Enunwa hit a Superman dive and fully extended himself and somehow managed to haul in a miraculous catch, but it was Robby Anderson who had the best practice. Anderson was zipping all over the field, burning corners with his speed and making catch after catch. The only thing that didn’t go Anderson’s way was on a quick receiver screen as he tried to find a crack in the secondary he instead found Juston Burris’ shoulder then a forearm shiver that sent Anderson to the ground. Anderson clearly didn’t appreciate that move, hopped up and popped Burris in the face mask and Burris was ready to tangle with the receiver. The two were separated quickly but Anderson was clearly not happy about what transpired though there’s no reason to think there’s any animosity between the teammates.

3) ASJ running wild – Jamal Adams didn’t practice today, he seemed to be perfectly fine as he moved around on the sidelines in good spirits, which meant there was no one on the defense that has had any success stopping Austin Seferian-Jenkins and that continued to be the case by day’s end. Seferian-Jenkins is just so much bigger than everyone else and moves so fast now that he’s dropped the weight and looks focused as ever that he continues to be an impossible matchup. Adams is the only one who has been able to stay close and deflect passes out of the tight end’s hands, but he wasn’t on the field today so Seferian-Jenkins did whatever he wanted.

This offense is going to struggle, but Seferian-Jenkins is going to the the safety net for the quarterbacks and he is going to be targeted a bunch. If he can look half as good in games as he has looked this offseason the Jets will be looking to lock him up for a long-term contract as a piece to build with for the future.