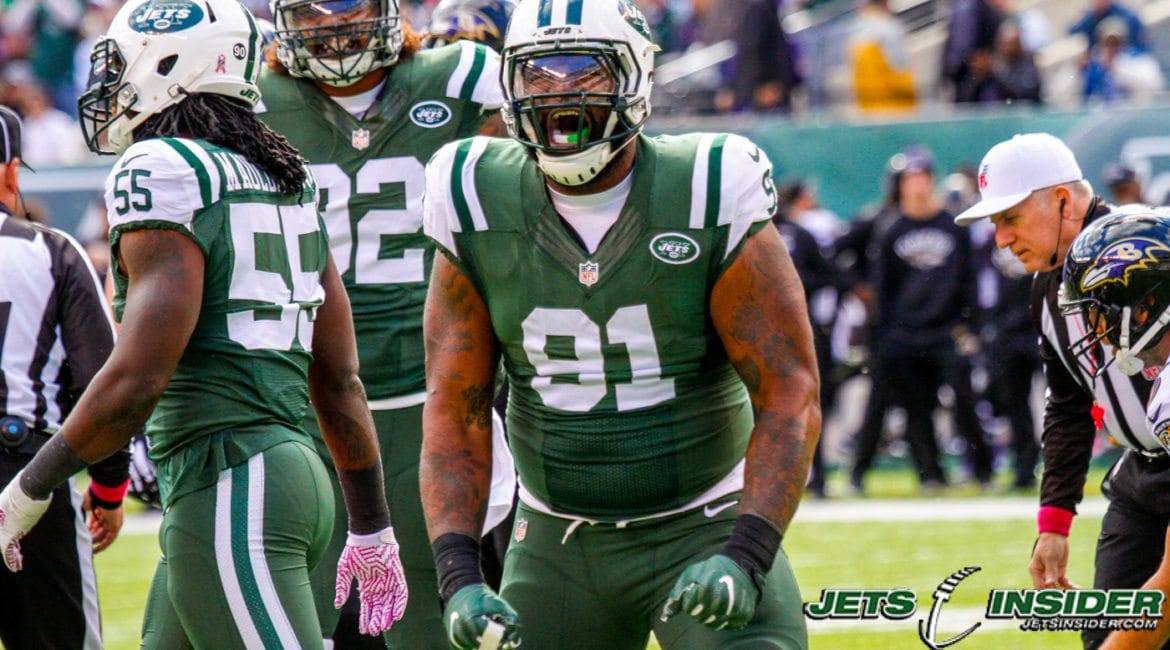 Florham Park, NJ – One day three the pads came on. The day the pads come on is always one of the best days of training camp and today was no different. We still have a long way to go until camp breaks, but today was certainly a whole lot more fun than the last two days.

Once the pads come on and the hits start popping you can actually start evaluating the play you see on the field. It’s still just practice so how players perform on each day only really tells you about that day, but once we see a bunch of practices strung together we can start to get a better feel and certainly a much better feel than when they’re just practicing in shorts. There was a lot to tap about today, so let’s just get right to today’s observations.

1) D-line power – You know all about the defensive line, but obviously as a unit they were a big disappointment last season. Between Muhammad Wilkerson playing at less than 100 percent and the Jets coaching staff not figuring how to best use Wilkerson, Sheldon Richardson, Leonard Williams and even Steve McLendon together the unit failed to live up to expectations. Williams did his part, as did McLendon but the unit as a whole was underwhelming. Time will tell if the coaching staff has it figured out this season, but I can tell you they definitely have a plan. Because they don’t allow us to divulge details of formations and how players are lining up I can’t tell you the plan that I’ve observed, but just know there is a plan (and that I’ll find a way to tell you before the rest of the world can see for themselves).

But what I can tell you is Richardson was an absolute beast today. Williams, McLendon and Wilkerson all had their moments too (Wilkerson destroyed James Carpenter on one running play) and the group as a whole was dominating the rushing attack, but Richardson stole the show. On one play he burst out of his stance and seemed to teleport into the backfield immediately, except he obviously didn’t teleport. He launched himself off the line and hit a swim move past, splitting the center and guard, and found himself in the backfield instantaneously and all in one motion. It wasn’t just the run game that the defensive line dominated though, they continue to pressure the quarterback to the point where if the refs actually stopped the play at every would be sack the quarterbacks might as well not bother practicing pass players against the first team defense (and yes, I’m obviously being hyperbolic here but not quite as hyperbolic as you think).

2) QB competition update – It was yet another underwhelming day from the quarterbacks, but Christian Hackenberg had the best day. Josh McCown had an awful day and really has yet to have a good day in training camp, even if we are grading Hackenberg on a curve (and believe me all of us are) McCown hasn’t been showing any real reasons why he should be the starter. Whether Hackenberg is good or not, there’s value in playing him in actual games to see what he can do. With what we’ve seen the past three days of McCown (and obviously there’s plenty of time for this to change) I’m having a hard time seeing the value in starting him with the way this roster is constructed. And for those of you still thinking it should be Bryce Petty (trust me, those people are out there) he certainly seems like he’s firmly entrenched as the third quarterback on the depth chart. Todd Bowles keeps insisting it’s a three man competition and they’ll rotate them all evenly, but through three practices McCown continues to get the bulk of the first-team reps, splitting the rest with Hackenberg and Petty is left with the scraps. That could change, but Petty hasn’t exactly given the coaching staff motivation to do so.

3) Jordan Leggett is starting to make some plays – For the third observation I was tempted to talk about how Demario Davis absolutely obliterated Eric Tomlinson in the backfield,  Ardarius Stewart and Chad Hansen fully practicing or even that while the running game has been struggling to get anything going they did pop a few outside runs today including once play where the snap got muffed and Petty couldn’t get ahold of the ball which turned out to be a good thing as it sailed into Jordan Todman’s arms and he bounced outside for a touchdown, but I decided to go with Leggett.

Austin Seferian-Jenkins continues to present a matchup problem for defenses as he seems to always be open, unless Jamal Adams is hovering around him to breakup the pass, but he’s been steady in how he’s looked. Yesterday I saw the first signs of life from Leggett and today I saw even more. Nothing crazy or spectacular, but he is starting to get open and make some catches. Seferian-Jenkins looks poised to have a really good year, I wouldn’t expect much out of Leggett this season but he’s starting to make some plays and there’s real potential with him down the road.

Game Recap Chargers 27 Jets 17,The Schottenheimer Problem,The Importance Of Calvin Pace Explained By Bart Scott,Three Observations Training Camp Day 1,Plenty To Blame All Around But This Ones On The Coaches,Which Qb Will The Jets Pick Tomorrow,Pace Thomas Keeping The Weight Off Of Gholstons Shoulders,Santonio Holmes Third Long,Jets Strength Coach Sal Alosi Trips Dolphins Player,Free Falling Three Reasons Why The Jets Are Fading Fast Plus Notes