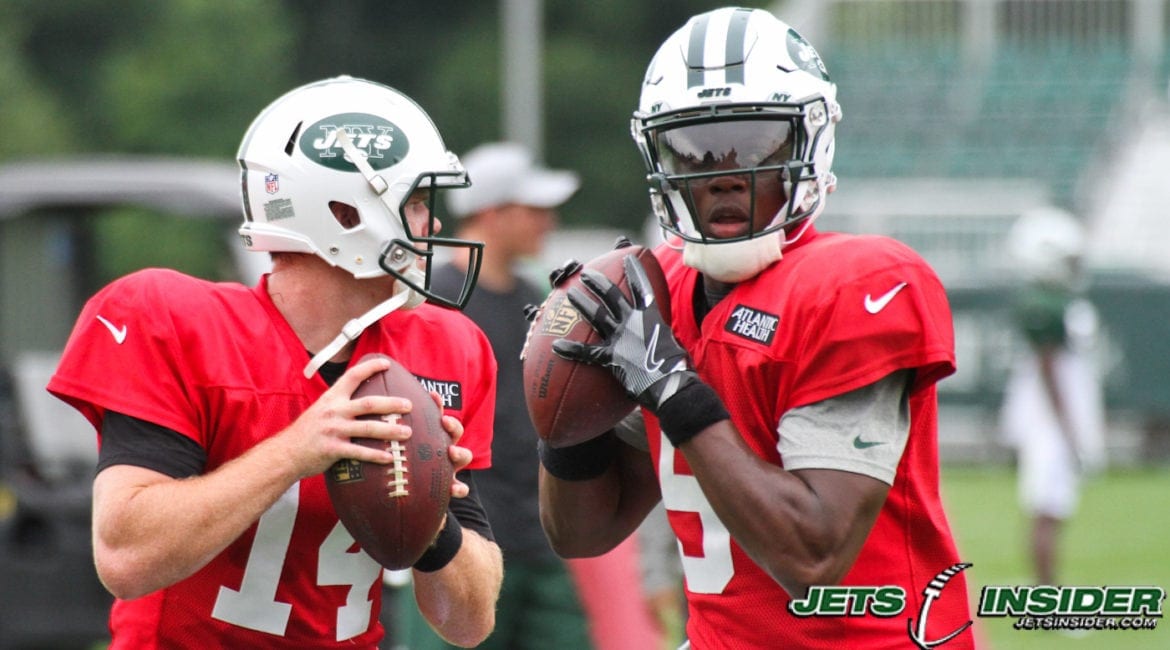 New Brunswick, NJ – The first J! E! T! S! chants were boisterous and hopeful out of High Point Solution Stadiums Saturday night as the boys suited up for their annual scrimmage. Mike Maccagnan’s group has Jets fans looking forward to Sunday for the first time in a couple years. With no obvious weaknesses, the Jets could surprise in 2018. Here’s what I took away from the scrimmage.

Although extensively covered by Jetsinsider and other media outlets, Trenton Cannon was more prevalent today than any other day at camp. Teddy Bridgewater was the second quarterback to see action, and on his second play he hit Cannon on a crossing pattern that Cannon turned into a house call. After the coaches and players cleared the field so the players could have some legitimate game action, Cannon took a pitch from Darnold and found the edge for a big gain. It was so impressive they ran the same play again, but the defense was a little more ready the second time, keeping it to a three yard gain. Cannon’s night was far from over. Shortly after a pair of muffed snaps by Spencer Long on consecutive plays, Sam Darnold found Cannon in the flat and he juked a linebacker, earning a hearty reaction from the crowd and some hard earned YAC. When asked about the rookie’s performance Darron Lee’s face lit up and he said “Man that dudes fast. Maybe a buck-eighty on a good day, but boy is he fast.”

With Quincy Enunwa sitting out with a hand injury and the team erring on the side caution and resting Terrelle Pryor, the receivers lower on the depth chart were given opportunities to flaunt their stuff. Chad Hansen has been drawing plenty of praise stemming from a strong minicamp, today he was able to show his growth.

During warmups he made a couple nice grabs on the sideline displaying some nifty footwork, and then made some big plays in the slot once on the field. The defensive line was quick to be in the quarterbacks face all night, and Hansen was able to get open quickly and have the wherewithal to snag a frozen rope and shield it from the defensive back on two consecutive throws from Bridgewater. As the likely number five receiver, Hansen is often the last name mentioned as having a surefire roster spot. Jonah Trinnaman is by no means guaranteed a roster spot, and is even a long shot to make the practice squad. He made a strong case for himself today. On the fourth play of the game, Trinnaman was able to get open and make a tough diving catch on a slight overthrow from Bridgewater. Four plays after the muffed snaps, Darnold was forced out of the pocket on third down and saw a wide open Trinnaman deep down field. He tried to make the throw but overthrew the speedster by a couple yards. If he had not had to sidestep Xavier Cooper, it more than likely would have been a 50 yard touchdown.

Trinnaman, who had an unimpressive college career at BYU, was offered a contract mostly on the strength of his pro day. He would’ve finished top of the NFL combine in the 40-yard dash, the vertical, and the broad jump. His broad jump was four inches from being a world record. His athleticism was too much for Derrick Jones, who’s been impressive so far, and has a size advantage on Trinnaman at 6’3”. Trinnaman burnt him on the outside, and Darnold, with a clean pocket, was able to find him deep down field, beating the extended fingertips and the 41” vertical of Jones. If Trinnaman can keep up his play, the Jets might have to extend him more than a practice squad spot to keep him from getting poached away.

Folorunso Fatukasi could take some snaps from Mike Pennel

Fatukasi got plenty of time at nose today and established his presence in the backfield all day. Spencer Long did not get any more plays after his muffed snaps, and Travis Swanson could not contain the sixth-round pick. He recorded a sack on a beautiful rip move where he attacked Swanson’s right shoulder until Swanson engaged, and quickly moved to his left while pulling him right to get into the backfield for the easy would-be sack, were they hitting the quarterback’s. He was tough to clear out of the way on run plays, and the Jets had very little success running anywhere but outside tonight. This was also due to the incredible play of Leonard Williams, who is yet to be blocked effectively by anyone on the Jets this summer. Mike Pennel struggled with penalties in timely situations last year, and is an average depth nose. Fatukasi has the potential to be much more.

There was a lengthy list of inactives, as Bowles likes to play it safe during the Green and White scrimmage. David Bass, Quincy Enunwa, Terrelle Pryor, Parry Nickerson, Kevin Pierre-Louis, Charone Peake, Kacy Rodgers II, Rontez Miles, Marcus Maye, Jeremy Clark, Jordan Leggett, Kelvin Beachum, Deon Simon, and Steve McLendon were all absent, and new signing Kendall Reyes did not suit up. David Bass has a lower leg cast and looks like he may be out for a while. Kelvin Beachum is week-to-week with a foot injury. The rest of them are either nursing minor injuries or recovering from previously disclosed injuries.

The Jets also took some time to celebrate Gio Toribio of Ossining, New York, who was diagnosed with stage 3 anaplastic large cell lymphoma on August 8, 2016 at four-years-old. Gio was inspired by the athletes who came to visit him, saying “if they are so strong, I can be strong too.” After a year of treatment, Gio was declared cancer free. Gio loves the Jets, and the Jets love him. Buster Skrine visited him while he was in the hospital, Jamal Adams gave him his cleats last season, and Darron Lee has a strong bond with Gio, hanging around after the scrimmage to watch the fireworks with him and his two brothers for quite a while. Click here to watch video of Lee and Gio.

Mikeyjets Author,Looking For The Bright Side Of The Adam Gase Hiring,Jets Release Schedule Open Home Against Boys,Game Recap Chargers 27 Jets 17,Woodhead Out Clowney In Thomas Snitching,Green And White Breakdown Jets V Raiders,Checking Up On Jets Statistical Rankings Post Week 12,Jets Offense Finding Its Niche,Jets Have Offensive Weapons Its Time To Use Them,40 Degree Days