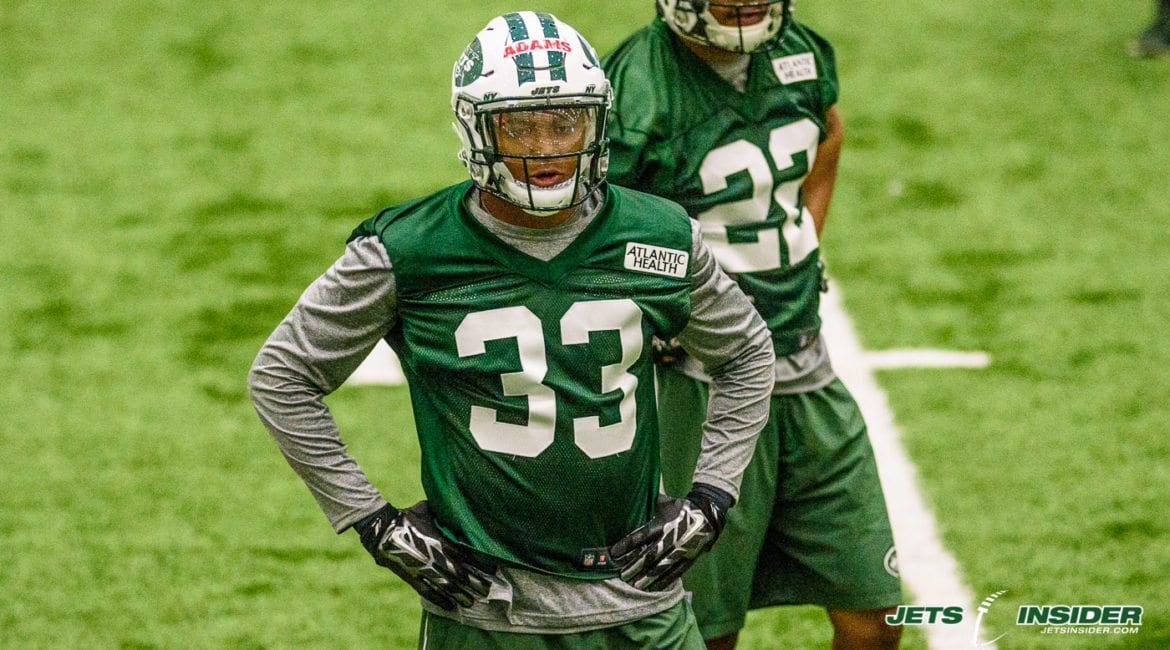 Florham Park, NJ – Day two of the New York Jets minicamp was another hot day, but it was the defense that was on fire as they had Christian Hackenberg cool off after yesterday’s impressive practice. The energy and intensity is starting to pick up, players are more comfortable with the systems and playbook as most of the plays have been installed, but as is usually the case with the Jets the defense holds the advantage over the offense.

1) Pump the brakes on the Hackenberg hype train – Yesterday was Hackenberg’s best practice, at least that the media has seen, with the Jets and when I tweeted that out some people seemed to get a bit too excited about it. These offseason practices often lead to people reading way too much into them and it works both ways. Yesterday was a good practice for Hackenberg, more so because he didn’t make any really bad throws than he was making all types of great throws. But on the other hand, it’s true Hackenberg hasn’t given us much to rave about but the stuff about passes being thrown to reporters was blown way out of proportion. Reporters stand right off of the sideline, any outside pass to our side of the field that misses is going to end up in the crowd of reporters. It happens pretty much every practice, usually multiple times a day, and it’s been happening for all eight years I’ve covered this team.

So, yesterday was good news but today Hackenberg reverted back to the quarterback we’ve been seeing. In two-minute drills, Hackenberg went three-and-out, missing badly on a short swing-route to a running back and getting sacked by Muhammad Wilkerson on third down. Then in red zone drills Hackenberg had a short pass batted away at the line, should’ve thrown an interception over the middle on the goal line but Rontez Miles dropped the easy pick, but he followed that up with a gorgeous touch pass to rookie running back, Elijah McGuire on a wheel-route for a touchdown. The next pass however almost got McGuire killed by leading him too far as he came across the middle. Throw in a couple of regular incompletions and a couple more sacks and it was a rough day for the second-year quarterback.

Of course it’s not like Josh McCown or Bryce Petty lit it up either, both threw picks, plenty of incompletions and were sacked multiple times. It was not a good day for the quarterbacks as a group.

2) Jamal Adams, Jamal Adams, Jamal Adams – Fans should get used to us reporters analyzing Hackenberg’s performance each and every day because of the nature of the position, but you should also get used to us talking about Jamal Adams almost everyday simply because he seems determined to make sure that we have to talk about him. During red zone drills McCown tried to hit Austin Seferian-Jenkins on a 15 yard out but Adams swooped under and knocked the ball away, then on the next play Adams jumped the route just a hair faster and came away with a pick on McCown as Adams’ defensive teammates erupted in cheers for the rookie safety. Later in team drills Adams crept up on the line, McCown called out for someone to “watch 33” but no one watched him close enough or was able to see anything but a blur as he flew off the edge and got a really quick sack.

It’s only minicamp so we shouldn’t read into this too much, but if you were determined to read into the offseason practices then you’re expectations for this kid should just keep growing.

3) Improved communication – Practices sure seem to be much louder than last year Part of that is due to higher volumes comping from the coaches, some due to the youthful energy and exuberance of so many younger players, but a good chunk of it is certainly better communication between the players. On the field you can hear players barking orders, and considering how often Todd Bowles talked about miscommunications leading to breakdowns on defense this can only be an encouraging sign. Obviously we’ll have to wait until September to see if the improved communication leads to fewer in-game breakdowns, but Bowles has to be pleased with what he’s seen so far.

The most interesting part of practice, at least to me, was when cornerback Darryl Roberts and Adams came off the field following one play. Roberts played his receiver to the outside, Adams wanted him to play it inside. Morris Claiborne joined the conversation saying he did the same thing Roberts did yesterday, Adams persisted in explaining. One, two, three other players eventually joined in the discussion as they listened to each other and debated the right move. It sure seemed like Claiborne was swayed by Adams’ argument in the end. I’ve seen players debate similar plays countless times, but never for this long and never in such detail with both sides willing to concede certain points to the other’s. It was a fascinating conversation to watch, luckily for me I had the good fortune of standing in the exact perfect spot to hear every word. Unfortunately for the fans, I’m not allowed to report anymore details about what was said.

The third and final practice of minicamp is tomorrow and us reporters, players and coaches will be on vacation until July 28.