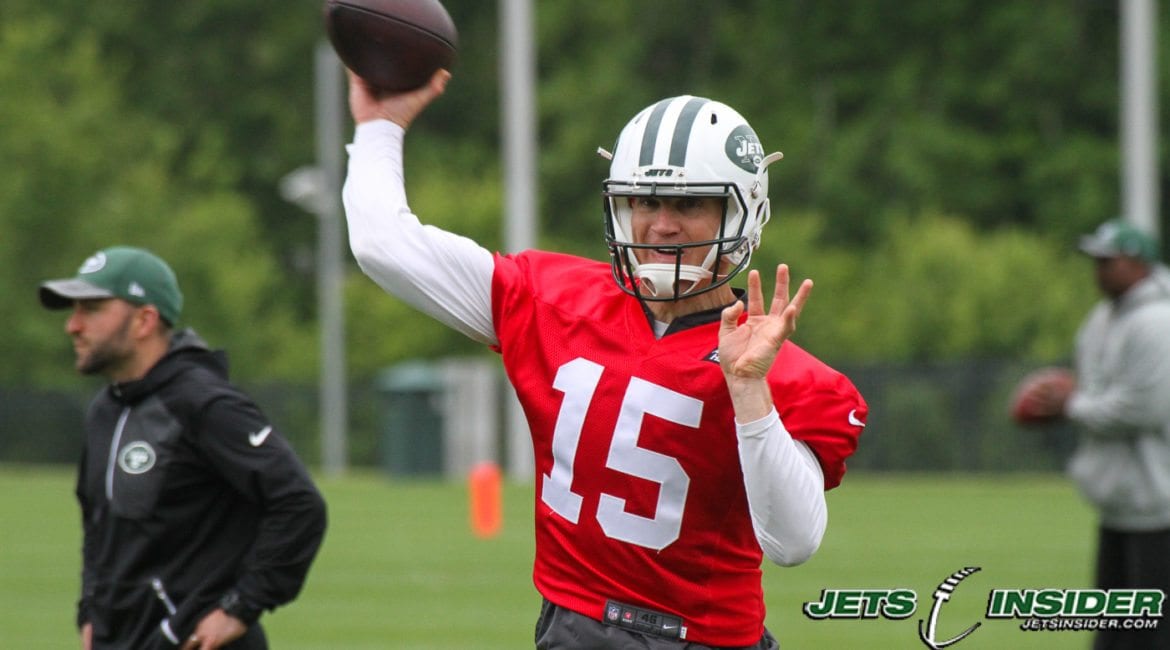 Florham Park, NJ – The fourth day of the New York Jets OTA’s, the second with the media in attendance, wrapped up earlier today and there were some big story lines that came out of Florham Park.

The biggest question mark for the Jets this offseason was their quarterback situation and the signing of veteran Josh McCown only created more questions. Suddenly the battle for starting QB became a three-way battle. McCown worked out with the first team in today’s OTA and impressed. According to ESPN reporter Rich Cimini, McCown threw 14-17 with the first team. This is not an indication that McCown is the starting quarterback, as Todd Bowles switches his QB’s around a lot.

Christian Hackenberg also proved he’s one worth watching throughout training camp. Though most of his reps came with the second team, he completed five passes on six attempts including one deep. The one quality Hackenberg has over McCown is the fact he can throw deep. This will be an issue, though, because the Jets run a lot of short passes in their offense, which Hackenberg still struggles with. If he wants to take snaps behind the center, then this is something he’ll have to improve on.

Unlike McCown and Hackenberg, Bryce Petty struggled. Petty only attempted two passes, one of which was an interception during 7-on-7 drills. There’s still a lot of time for Petty to prove today was just a fluke, but you have to believe Todd Bowles is keeping today in the back of his mind.

Last year, Seferian-Jenkins joined the Jets from the Tampa Bay Buccaneers just before their matchup against the Seattle Seahawks. The tight end hasn’t lived up to the expectations for his career, but in the final year of his contract, he’s looking to turn it around. Last week, Chris Nimbley noted in his Three Observations: OTA article the chemistry between Josh McCown and Austin Seferian-Jenkins that dates back to McCown’s days as the starting quarterback in Tampa Bay while Seferian-Jenkins was a rookie.

This week, his performance only continued to get better. He caught every pass thrown his way in drills up until the last few minutes of OTA, when the ball was stripped from his hands by Jamal Adams. Coach Bowles was impressed with what he saw from the tight end.

In this mostly short-pass offense the Jets will run with during training camp, Todd Bowles plans to utilize the tight ends to their maximum capabilities, which means Seferian-Jenkins could see a lot of balls thrown his way.

3) Adams and Maye with First Team, Pryor with “Everybody Else”

Jets Nation knew this was going to be an issue heading into OTA’s and Training Camp, but will it become a distraction for the team? Calvin Pryor’s name was constantly on the rumor mill as unlikely to remain on the team, and those rumors gained more traction as the Jets selected Jamal Adams from LSU and Marcus Maye from Florida with the team’s first two picks in the NFL Draft this year. In addition, the Jets declined to pick up Pryor’s option, so he’s set to become a free agent in 2018.

Once again, those rumors arose again when the media noticed Adams and Maye were practicing with the first team. Meanwhile, on the other side of the field with the third- or fourth-teams was Pryor. Adams and Maye impressed during practice while Pryor looked on from the sidelines. When asked what the meaning behind Pryor practicing on the other side of the field was, Bowles shrugged it off.

“No, it’s a sign that we’re moving guys around on both fields, trying to get acclimated a little bit.”

Jets fans probably won’t have to wait long to hear an answer regarding Pryor and his fellow rookie competitors, but at this point, they can only take it for what it looks like: the starting safety position is up for grabs. This should encourage Pryor to work harder to retain his starting job, and if he’s not part of the Jets beyond the 2018 season, then at least he’ll get great offers from other teams. However, if he slacks off because he feels discouraged, not only will his future with the Jets be gone, but his future as a safety will be as well.