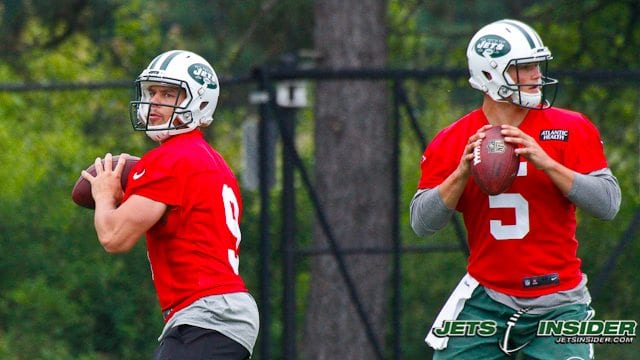 Florham Park, NJ – The football calendar has officially turned to 2017. We’re still months away from the start of the actual season but today was the first day of offseason training activities also known as OTAs. As Todd Bowles says “they’re just out there in shorts and no pads” so don’t expect any in-depth breakdowns or projections off of today’s practice, but it’s always good to have football back in our lives even if it’s football in shorts with no pads. As we do for every offseason practice we will give you three observations from the day’s practice, so let’s get right to it.

1) Josh McCown and Austin Seferian-Jenkins seemed to reconnect immediately – McCown was the Bucs quarterback during Seferian-Jenkins’ rookie year and while the two didn’t exactly light it up in Tampa they seemed to already be comfortable with each other as McCown hit the big tight end multiple times throughout the day. Of course this could really be two separate observations as we could talk about how solid McCown looked, of course he’s a vet with plenty of experience and no one doubts his practice ability, or how the Jets actually used a tight end consistently in a practice for the first time since Dustin Keller was the tight end. And actually this could potentially be three observations rolled into one because it could have more to do with the new offensive coordinator John Morton than the players.

Morton runs a west-coast based offense, lots of short, quick passes and the Jets haven’t been shy about the fact that they will look to get the tight ends involved more this year. We also got to talk to Morton for the first time today and he was impressive. Now he’s not as forthcoming as Chan Gailey so reporters won’t like that he won’t give us good quotes, but as always the real story will be how the offense plays and that’s where our focus should be. I did find his bluntness and lack of sugar-coating awfully refreshing though. When he was asked why he decided to take this job considering the quarterback options and lack of recent success he didn’t bother telling us about the potential of certain players or anything like that, he simply said “opportunity.” This was his first opportunity and he took it. It shows confidence in himself and it’s just refreshing to hear.

2) Eric Decker did way more than I expected – Decker was donning a red jersey so he can’t be hit, but he was going through even team drills and I wasn’t expecting him to do that much this early. It’s a good sign that he should be a full go sometime in training camp if not before. He didn’t do anything spectacular or even worth mentioning outside of being out there but he was out there and it will be good for all the young receivers to watch and learn from such an expert route-runner.

3) Morris Claiborne got the first team-drill interception in 2017 – Maybe I shouldn’t have combined three observations in one, but I did so this one will be kind of weak. New cornerback Morris Claiborne made a pick in team drills today, it was a really nice play too. That’s really all I got on that, it was one play so obviously it doesn’t mean anything but it was the standout play of the day.

Calvin Pryor was not at practice today and Bowles offered no explanation simply saying “it’s voluntary.” Bowles wouldn’t even confirm if Pryor told the team he wouldn’t be here, which seems unusual since that’s the type of thing Bowles is normally willing to divulge. Bowles did say Pryor has been around the facility throughout the offseason, but we’ll continue to monitor the situation as it plays out. I know people obviously think the Jets drafting safeties in the first two rounds is bad news for Pryor, and it is bad news for his future with the Jets past this season, but in a weird way I think it could actually help Pryor. With Jamal Adams and Marcus Maye here and presumably getting the heavy workload it should help the defensive coaches limit Pryor’s responsibilities and let them focus on doing what he does best. Bowles likes to use three safeties, keep Pryor in the box and running downhill towards a target. The less he has to turn his head and run upfield the better.

Christian Hackenberg practiced with the third-team the entire day. He was on the far field so it was hard to really see how he was doing, but we did notice he threw a pick and continues to really struggle on short passes. It’s also hard to read how much fault lays with him or the receivers since he was working with the bottom of the roster receivers, but the swing passes were definitely on him because they were ugly. Bowles and Morton both said Hackenberg will get his share of reps with the first-team, they’ll most likely give him those reps on days like tomorrow and Thursday when the media isn’t at practice during OTAs. Once training camp begins they won’t be able to hide him anymore and then you can be ready for reports on his progress.