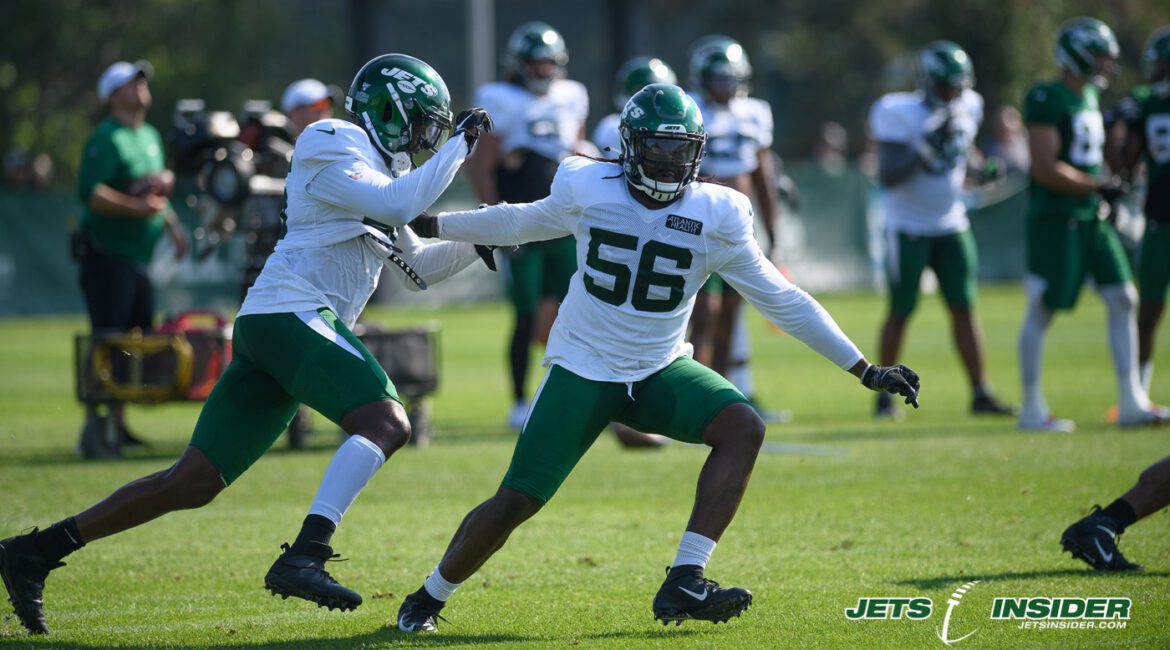 Florham Park, NJ – Today was the day of the switch. The defense got to wear the green jerseys, the offense forced to wear the white. Look good, play good they say and the defense looked so good that they won the day. Leonard Williams was held out of practice with an “irritation in his hip,” and Steve McLendon had an excused absences for personal reasons, but the defense didn’t miss a beat with Quinnen Williams and Nathan Shepherd filling in for most of the first-team reps. As a result of today’s defensive dominance all observations will be about the defense.

1) Jachai Polite is starting to make some noise – For most of training camp, reporters have been telling you how quiet Polite has been. How he has been stuck on third-team defense and not doing much. Now it’s starting to feel like those reports will change. First though, let’s really break this down.

In a best case scenario Polite will be a pass-rushing specialist this year. He has natural pass-rushing ability and plenty of it, but in order to become a three-down linebacker he has a lot of work to do. Adam Gase doesn’t run scripted practices and most of every practice is situational, this means that, of course, Polite won’t get as many reps as other linebackers. On top of this he has been getting more and more second-team reps over the past week and even got a handful of first-team reps last week. Polite certainly isn’t dominating, but he’s been on the field much more than you think and he’s played fairly well.

Today, he played really well. No first-team reps, but plenty of second-team reps and he was flying all over the field. Polite had two sacks today and just missed a third. On the near miss he shot around the edge so quickly Trevor Siemian had to take off running as soon as he got the snap just to narrowly avoid being sacked. Polite even dropped back in coverage to defend a running back out of the backfield and did a good enough job that the quarterback had to throw it elsewhere. Polite has a dangerously quick first-step, impressive burst around the edge and an array of pass-rushing moves. He loves to hit the spin button, has great bend and will keep fighting through blocks. Polite is far from a finished product, but he’s getting closer each and every day. Other reporters noticed it today and you should expect to continue to hear more about him as camp continues.

2) Rontez Miles gets all the first-team snaps – With Marcus Maye still not practicing it has been Rontez Miles getting the bulk of the first-team snaps. Doug Middleton was splitting reps with Miles at the start of camp, but lately it’s been all Miles. It still feels odd to see Miles lined up as the single-high safety but every time you look, there he is. He’s looked pretty good too, but is often just a step slow when Sam Darnold is able to find a receiver directly between Miles and a linebacker or corner. Today it was Ty Montgomery up the seam that Darnold found for about 25 yards, perfectly splitting Miles and Brandon Copeland.

Middleton and Brandon Bryant have been working pretty exclusively with the twos. It sure feels like Gregg Williams is most comfortable with Miles in that starting safety spot with Jamal Adams as long as Maye is out. Maye is still going through his own workout drills off to the side during practice, and he seriously doesn’t look hurt at all. During 11-on-11s in the red zone you can spot Maye just outside of the back of the end zone, watching everything develop as he takes mental reps.

3) Playmaking cornerbacks – Trumaine Johnson keeps telling us he likes all the “playmakers” they have in the cornerback group and today he contributed proof for his argument. For the second time this training camp Darnold threw an interception in team-drills. For the second time it was Johnson that made the pick. The pick came on a clear miscommunication, Robby Anderson went to the left, Darnold threw to the right, into an empty void and Johnson dove into said void to come away with a diving interception.

Later in practice it was Brian Poole’s turn to make a play. After the defense stopped the offense on the first three plays in the red zone, Darnold tried to hit Jamison Crowder for a touchdown but Poole was right there to knock the ball away and end the offense’s drive. Poole has been making plays like this just about everyday of camp except for the first day which he didn’t practice.

Quote of the day – “He’s not the type of quarterback you’re trying to protect. You’re trying to turn him loose,” Gase said of Darnold. Today was a bad day for Darnold based on the standards he has been setting for himself in camp this year, but it was far from terrible. Darnold has a lot of gunslinger in him so it’s interesting to see that Gase is content to let Darnold be his natural, gunslinger self.