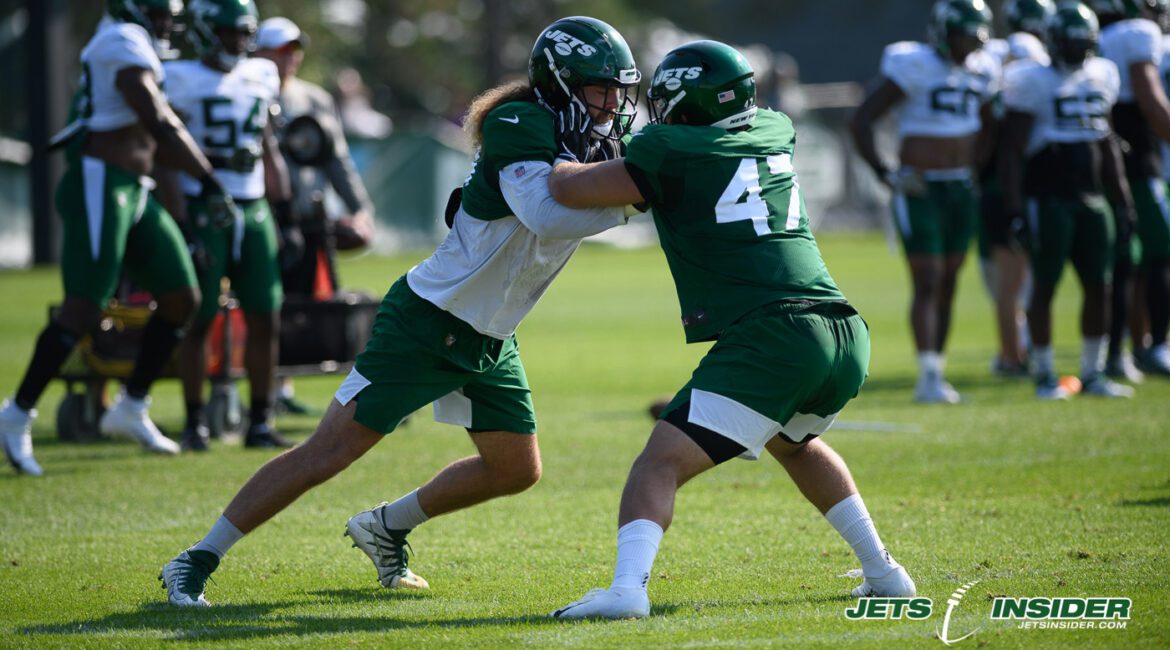 Florham Park, NJ – Everyone is excited about the signing of Ryan Kalil but he did not join his new teammates today and according to Adam Gase, you shouldn’t expect him to practice anytime soon.

“No. It’s going to be a minute,” Gase said. “We’re going to make sure that he’s good to go before he steps on the field.”

Gase told reporters that apparently Kalil lost a decent amount of weight during retirement but he has already started putting that weight back on. Obviously the Jets want to make sure he’s closer to his playing weight before sending him back out on the field. So, you’ll have to wait a little to hear how Kalil looks out on the field but there were plenty of other observations to make today.

1) Defense won the day – The offense has been dominating most of these practices so far this year. Today marks only the second practice that the defense won and they won the day convincingly. Sam Darnold didn’t have a bad day, he still made his fair share of impressive plays, but he certainly didn’t have a great day. Darnold did throw an interception in seven-on-seven’s (Kyron Brown came away with the pick on the goal-line) and almost threw another one on the very next play. Earlier in 11-on-11’s Darnold went to throw a quick pass to Chris Herndon in the flat but Brian Poole read the play from the snap and jumped the route, just missing an interception.

Frankie Luvu broke up a pass from Trevor Siemian that deflected into the air and into Parry Nickerson’s hands in seven-on-seven’s. Quinnen Williams continues to push offensive lineman around and C.J. Mosley was all over the field today. Mosley was stopping runs, got into the backfield for a sack and made a play in coverage. Of course as good of a day as the defense had, Robby Anderson still found a way to cook Trumaine Johnson for a 40-yard touchdown.

“It was a great job by the O-line,” Darnold said. “They did a good job picking that up. It was zero (coverage), which means no one’s in the middle of the field so it’s one-on-one across the board and they’re bringing an extra guy, more than we can block. What we call it is, we just have to beat the adder. When the guy guarding the running back sees that the running back’s blocking, he’s going to add on and we can’t block him so Robby had a good route, ran a really good route and I put it on him and he was able to outrun the defense.”

2) Trevon Wesco can block – Wesco has made a handful of nice plays as a receiver, he doesn’t look fast at all but he somehow manages to sneak himself open and can elevate to make a leaping catch when necessary. But today Wesco came to block.

Wesco had a bunch of great blocks today, but there was one in particular that stood out the most. It was on the far side of the field so I couldn’t see who he blocked, but he drilled the defender directly in the midsection and pushed the defender off his spot and moved him back a few yards. Recognizing Wesco as a tight end still takes some getting used to, wearing number 47 and a build that resembles more of a fullback reps keeps confusing me, but so far he has shown an ability to handle the blocking duties of a tight end.

3) Jordan Jenkins dominated pass-rushing drills – Jenkins turned in a solid day of practice overall, but it was in the pass-rushing drills where he really shined. On the first play of the drills, Jenkins and Leonard Williams went up against Kelvin Beachum and Kelechi Osemele. They ran a twist that knocked Osemele into Beachum’s legs and both offensive linemen to the ground. Beachum dropped with an ankle injury, it did not look good at first but he was able to gingerly walk himself off the field. After practice Gase said it was an ankle injury and they don’t expect him to miss a lot of time. A few reps later Jenkins was facing off against Osemele again and hit him with a two hand punch that looked like a Ryu from Street Fighter style Hadouken that knocked Osemele a few yards back.