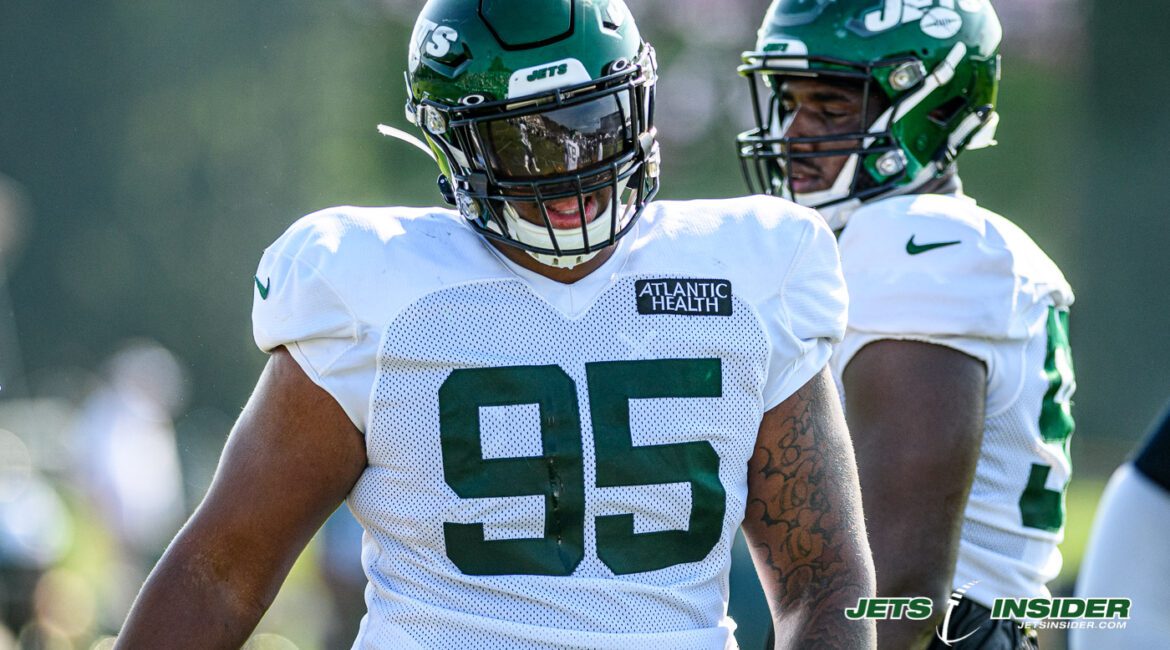 Florham Park, NJ – Today was a fairly uneventful practice, not too much to talk about but that won’t stop us from trying. There was a brief scare towards the end of practice when Trumaine Johnson ran into Jamal Adams. Adams dropped straight to the ground, which got everyone’s attention, but it turns out he just got the wind knocked out of him. Much of today’s observations are similar to previous observations, but what can I say, Sam Darnold keeps looking great so I’m going to keep writing about how great he looks.

1) Sam shines again – I’m really not trying to make Darnold one of my observations every single day, but he obviously doesn’t care because he continues to look great one day after another. It’s not just the completed passes, the reading of the defense, the making plays off script, it’s everything. You can see how much more comfortable he is out there, how calm he is and how much confidence his teammates have in him. Darnold is out here running the offense like a well-oiled machine. He’s making throws all over the field, throwing through traffic and also throwing guys open downfield. He’s making smart check-downs/throwaways when no one is open and just generally doing everything good quarterbacks do.

2) Run-stuffing Quinnen – Quinnen Williams showed off his ability to be disruptive today. On two different plays Williams absolutely blew up a running play. Williams showed off his quickness as he shot through the line to tackle Elijah McGuire in the backfield for a loss, McGuire was barely able to get the handoff when Williams was in the process of tackling him. Both of these plays were against the Jets second-team offense but he is starting to look more confident. It won’t be long until you start seeing him do this consistently in games.

“Him practicing like that, it’s great for us to see,” Adam Gase said. “You don’t have to wait for preseason games to see that there’s a lot of things that he can do, he can do well. Once we get going in the preseason and he starts seeing some different run game schemes things from other teams that maybe we don’t do, or we might do things different than somebody else, the more he sees the better, that’s just the experience a rookie needs. He just needs as many looks as possible.”

3) Le’Veon broke off a big run – Talking about running backs in training camp is always a little bit tricky because they always look good. It’s difficult to tell how much of that is the running back actually playing well and how much is just training camp. Bell has had a handful of plays so far where it was clear that it was his speed, his quickness, his playing ability that was shining. Today he had his best one yet.

Gase had the offense back all the way up to start within their own five-yard-line to see if they could dig their way out of a hole and get some space to work with behind them. Bell took the handoff from Darnold, showed off his patented patience then exploded through the hole for what would’ve been at least a 15-20 yard gain. As impressive as the run was, after practice Bell made sure to give all the credit to Darnold and the offensive line.

“We got to the line of scrimmage, everybody really did their job. Sam did a good job of getting everybody to the line of scrimmage, making sure everybody was set. We went on a couple of hard counts, I think the defense got a little relaxed because they thought we were trying to draw them offsides,” Bell said. “We ended up running a dive play, the O-line, everybody fit up, they didn’t show me no color, I had no penetration so all I did was set up my blocks and, you know, just ran through the hole. Those guys opened up the hole and I just tried to make a play in the open field.”