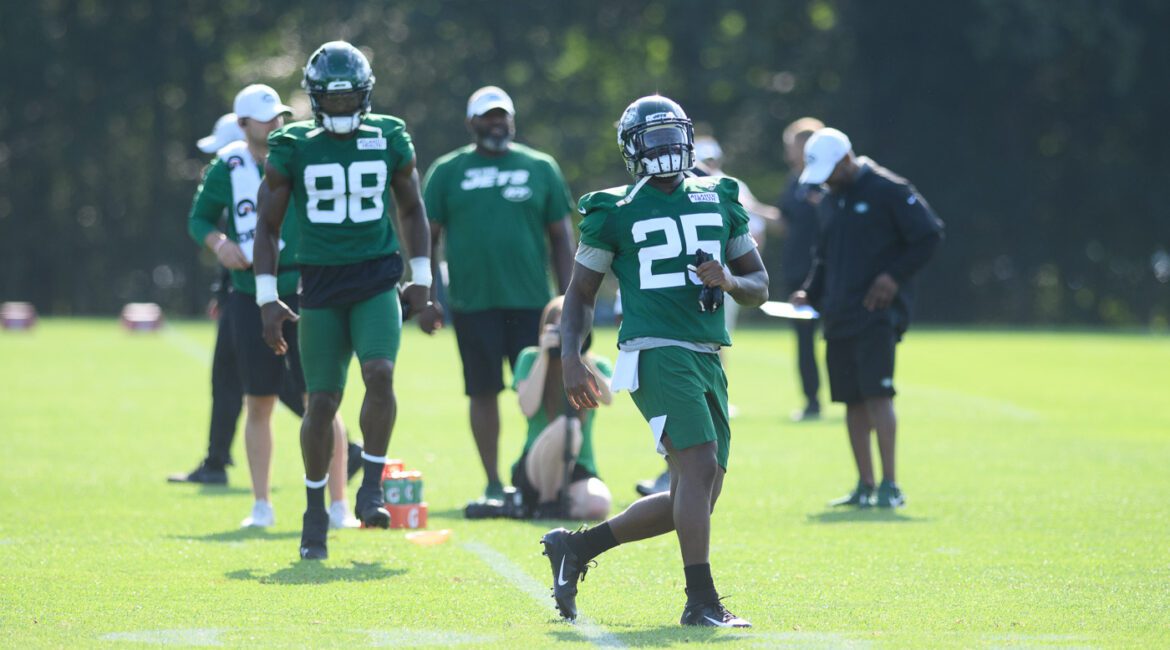 Florham Park, NJ – And on the third day, the Jets put the pads on. The pads came on and the hits immediately followed. The day started off with a heavy dose of running plays before they settled down into the rhythm of practice.

1) Sam threw his first interceptions of camp – The offense still won the day again, but Sam Darnold did throw his first interception of training camp. The good news is, it wasn’t a bad play by Darnold. It was an excellent play by Trumaine Johnson. Johnson was covering Jamison Crowder on a slant route, Johnson read the route, and Darnold’s eyes, then slipped right underneath Crowder for the interception. It was a much better day overall for Johnson as well, he made a couple other plays and didn’t give up any big plays downfield.

Adam Gase continues to be excited by Darnold’s potential, how excited? “He’s 22-years-old and he can throw the piss out of the ball so it’s fun to call plays.”

Still it was the offense dominating the practice again. Darnold was expertly picking the defense apart, spreading the ball around to his receivers, tight ends and running backs. Speaking of running backs…

2) Ty Montgomery continues to look really good – Early on in practice, Ty Montgomery took an inside handoff up the middle, broke through the line, juked Rontez Miles out of his shoes and scooted in for a 50-plus-yard touchdown. Montgomery continues to impress as a receiver as well and looks very comfortable in this offense. Obviously Le’Veon Bell is still the star at running back and the top three receiver spots are solidified but having Montgomery with the ability to play both positions will be an advantage Gase will look to use often.

Bell and Montgomery have been on the field at the same time numerous times, either one can line up in the backfield or out wide and they can switch and rotate to keep defenses guessing.

“It’s great. I mean the more guys that we have that can do multiple things the better,” Gase said. “I think Ty’s (Montgomery) flexibility is huge for us. It helps you with the active (roster on gameday). You might be able to go a little light on wide outs because he has experienced. You can go a little heavy on the backs that helps on special teams as well because you can save a roster spot with a guy that can just only play offense, or can play defense. When you got a guy that can do multiple things and contribute on special teams, that’s valuable for us.”

3) There’s just something about Trenton Cannon in pads in training camp – Last year Trenton Cannon had an extremely impressive camp, his speed and quickness jumped out in nearly every practice. Obviously he struggled on special teams and was never able to carry his impressive camp performance into the season, but once the pads came on there was Cannon showing off again. As shifty and fast as Cannon is, what’s most impressive is watching him lower his shoulder and bounce off of defenders much bigger than he is. He never goes down on the first hit, he’ll make you miss or bounce off a defender and spin upfield. It’s a really crowded backfield this year with Bell, Montgomery and Bilal Powell all with their roles pretty much set already. Cannon might not be able to make this roster regardless of how much he impresses, but if he can keep this up in the preseason he will at least be able to put out some quality tape for another team to notice.


David Harris Is Just Glad Nick Folk Made The Kick, Sam Darnold Out Indefinite With Mono, Plax Says Sanchez Played Through Shoulder Injury, Jets Lose To Pats 26 6, Desire To See Tebow As Jets Qb Is Created By The Media Not The Fans, Watch Breaking Down Jets Vs Chiefs, Bengals Jets Preview, 53 Man Roster Set Until Tomorrow